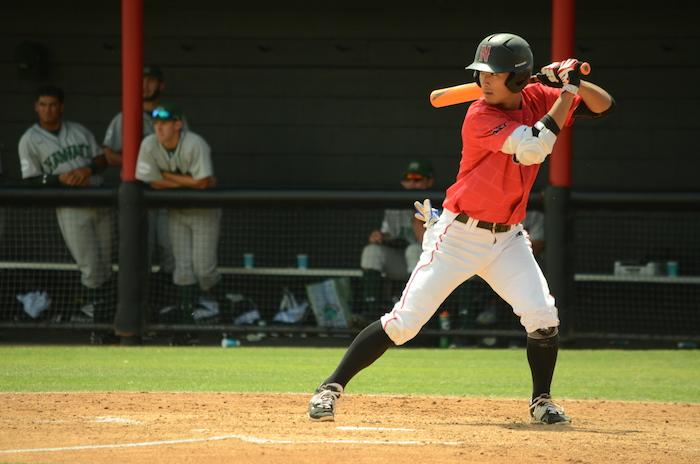 Coming off a heart breaking overtime loss on Saturday, CSUN’s baseball team had a field day offensively, scoring nine runs, in a 9-3 win over the University of Hawaii Rainbow Warriors.

He went on to give up only to earned runs in 5.1 innings, enough for his sixth win of the year.

On the offensive end, the Matadors’ patience paid off in the bottom of the second inning as they forced two walks in bases loaded situations to give them an early 2-0 lead.

CSUN added one more run in the bottom of the fourth as senior Nolan Flashman was able to score on a RBI-single by senior infielder Yusuke Akitoshi.

However, Hawaii responded with two runs in the top of the sixth inning to pull within one of the Matadors.

But in the bottom of the frame, Flashman was able to get on base with a pitchers count 0-2 single into right, giving the Matadors momentum

Singles proved costly for the Rainbow Warriors in the sixth.

With two pitching changes in the top of the seventh inning, CSUN head coach Greg Moore did not flinch as Hawaii seemed to get a spark between innings as three out of four batters in the inning reached base safely.

Moore decided to put in senior pitcher Rayne Raven to relieve freshman pitcher Ray Diaz. Hawaii was only able to tack on one of more run, leaving one runner stranded on-base.

Coach Moore began to shuffle the line-up with pinch hitters and runners to begin the bottom of the seventh.

In the aftermath of all the changes, Akitoshi proved reliable after doubling up the middle bring in two more of his game-high four RBI’s, inflating the Matador lead 7-3.

In bottom of the eight inning, CSUN picked up two more insurance runs as Berry blasted a solo home-run out of the park and Flashman hit an RBI sac-fly.

Given the sizable lead, junior pitcher Samuel Myers came in and closed the game, sealing the victory for the CSUN.

The win puts the Matadors at 24-14 for the season and 3-9 in conference play, which only puts them in eighth place in the Big West Conference.

CSUN looks to carry this momentum when they travel to UC Riverside next weekend to face the UC Riverside Highlanders three times in three days. The series opener is at 6 p.m. on April 29.