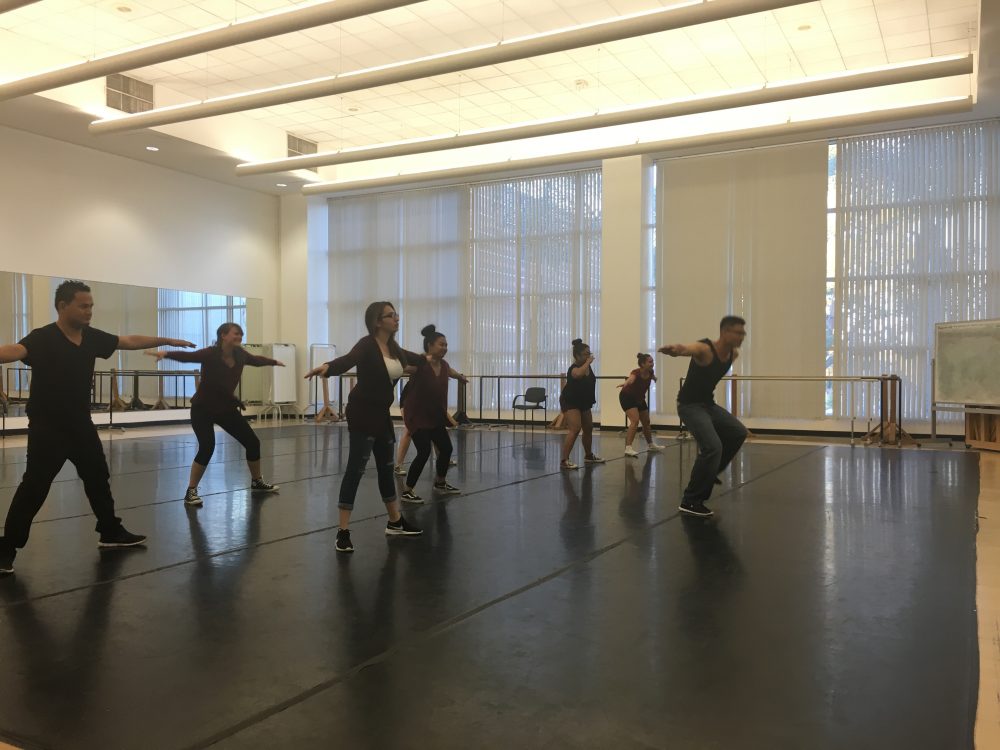 The team warming up before they begin practicing.

Deaf studies major and dance minor Frances Maurer, along with her co-choreographer, Allen Chung, will present a “deaf dance” in the student choreographer performance of Kinesis.

Maurer, came up with the idea of making a deaf dance when she took a deaf literature class last year, where she learned about “deaf west” on Broadway.

Maurer began the process by reaching out to her professor and shared her idea for her capstone for graduation. Although Maurer’s idea wasn’t initially praised, she pushed through with her plan.

In the process of designing the choreography she came up with the idea of calling the dance “audism.” Audism is defined as the idea that hearing makes one superior. The name was an effort to show a disability doesn’t hold one back.

“It doesn’t matter if you’re hearing or deaf,” she said. “You can learn to dance, and you can have a beat because everyone has an internal rhythm.”

By designing her dance after the message of audism, she named her dance “Why can’t you hear me?”

“The idea [is] that if you can’t hear or speak properly you are considered lower and inferior to everyone else,” Maurer said. “You can’t be in the same level as everyone else. You’re not considered equal.”

At the beginning of the dance there are two groups of dancers. It is mean to represent deaf with a lower “d,” to describe a person born medically deaf, she said.

As the dance builds, audience members see a number of movements, signs and stories.

Rachel Ray, a deaf studies senior, explained the dance is meant to help represent there is a greater identity to deaf individuals. She said there is a culture where other individuals may share similar experiences.

Maurer said she wanted to showcase the deaf communities experience of dealing with oppression.

Some of the movements represent the oppression and are seen when the dancers go into two circles. They use their fists and their feet to push upwards in order to represent the feeling.

Chung has a solo where he uses specific words he turns into movements.

Maurer also has a solo where she tells a story about a TED Talk done by a deaf woman. The talk represents the woman’s story of being told by her professor to never speak in front of a group without an interpreter.

By the end of the dance it builds to represent deaf with the capital “D.” This type of deaf represents identity, Maurer said.

“I am very proud of who I am,” Maurer said. “That’s why at the very end the dance my four deaf dancers walk to the front and they sign I am deaf and I’m proud.”

Initially when designing the dance, Maurer wanted primary deaf dancers since the story she wanted to portray regarded their stories.

When Maurer held auditions she realized many individuals face various forms of oppression, regardless if deaf or not. Maurer began to reach out to others willing to participate.

Practices were not as difficult as expected because every dancer knows sign language.

“We do taps on the shoulder, eye contact and stomping,” said Jerome Lagaya, deaf studies junior.

As the dancers prepare for their upcoming performance they hope to emphasis one important message.

“Everybody’s story is different but then again it comes together when it’s Audism,” said Arianna Rojas, a deaf studies sophomore.