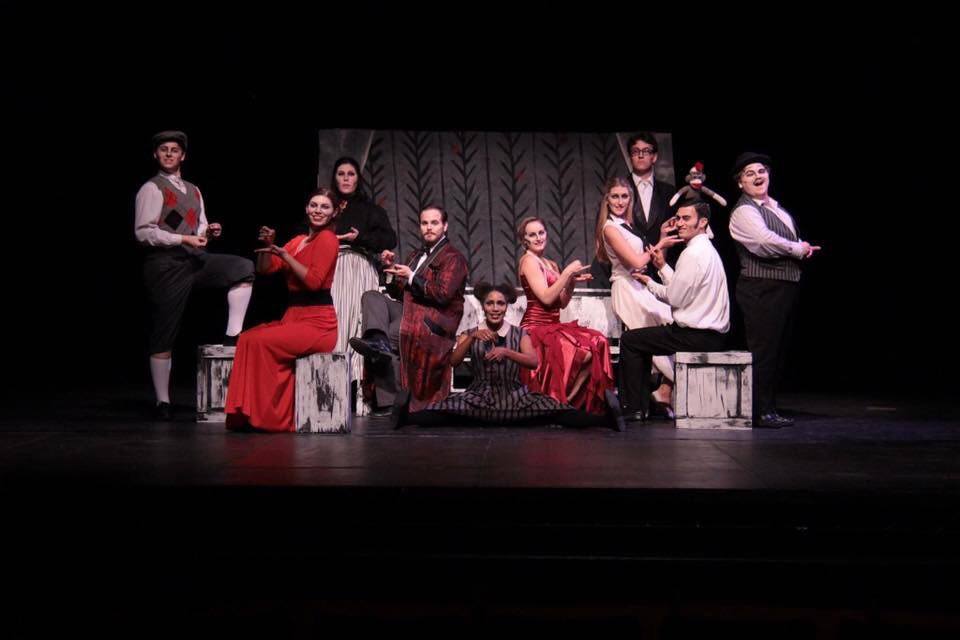 The disturbingly dark comedic works of artist and writer, Edward Gorey, were showcased in a musical performed by the CSUN Theatre Guild at the Nordhoff Hall’s “Little Theatre” in CSUN, April 22-23.

The CSUN Theatre Guild, a student organization that advocates in the learning of theatre and the ability to showcase the talents of various CSUN students, chose the works by Gorey to present in a musical entertainment called “Gorey Stories.”

The performances were collection of Gorey’s creepiest, yet silly, children-like poems and short stories with twist. Skits included in the performances were “The Gashlycrumb Tinies: A Very Gorey Alphabet Book” and “The Hapless Child” which deal with the abandonment, kidnapping and deaths of various children.

Ghoulish face paint, and black and grey monochromatic costume designs were worn by all the actors of the performances. The Victorian gothic theme of the set and clothes seemed carefully chosen and detailed, according to CSUN alumni and theatre major Vanessa Rogers.

“Besides the incredible performances, the costumes and the way the actors became the characters so seemingly, pulled me into their weird and eerie world,” Rogers said. “The fact that they made murder so funny was a weird yet enjoyable experience for me.”

The actors had talented voices and exaggerated facial expressions and movements throughout the entire show which was a favorite for Fatima Said, junior theatre major at CSUN.

“The performances were so weird yet awesome and absurd. I didn’t expect it to be like that. I thought it was going to be more straight forward and it wasn’t. They had me clinging on to every part,” Said expressed. “Even if I was feeling sad emotions for the characters, I was still laughing. The mixture of the two [emotions] was my favorite part. There was a balance.”

According to an actor of the “Gorey Stories,” Zachary Tannous, senior theatre major, the ten actors always wanted to meet and collaborate with the director in preparation.

“I think our hard work paid off tonight,” Tannous said. “I feel amazing and my favorite part was being my character, Jasper. I was him for the most part and I loved that I got to be really dark in my performance.”

Secretary of the CSUN Theatre Guild and junior theatre major, Sarah Kline, was also an actress for the show who has had a passion for theatre since she was a little girl.

“Theatre spoke to me at a young age and it’s been the one thing that I love more than anything in this world ever since middle school,” Kline said. “For this show I had great people to work with and we have been working really hard. I think we did pretty good tonight.”

The theatre was almost filled with a laughing and shocked audience throughout the entire show.

“The audience was so alive and animated and that is the greatest thing for a performer,” Kline said. “When the audience has a reaction, that’s all we really want, so I loved them tonight.”