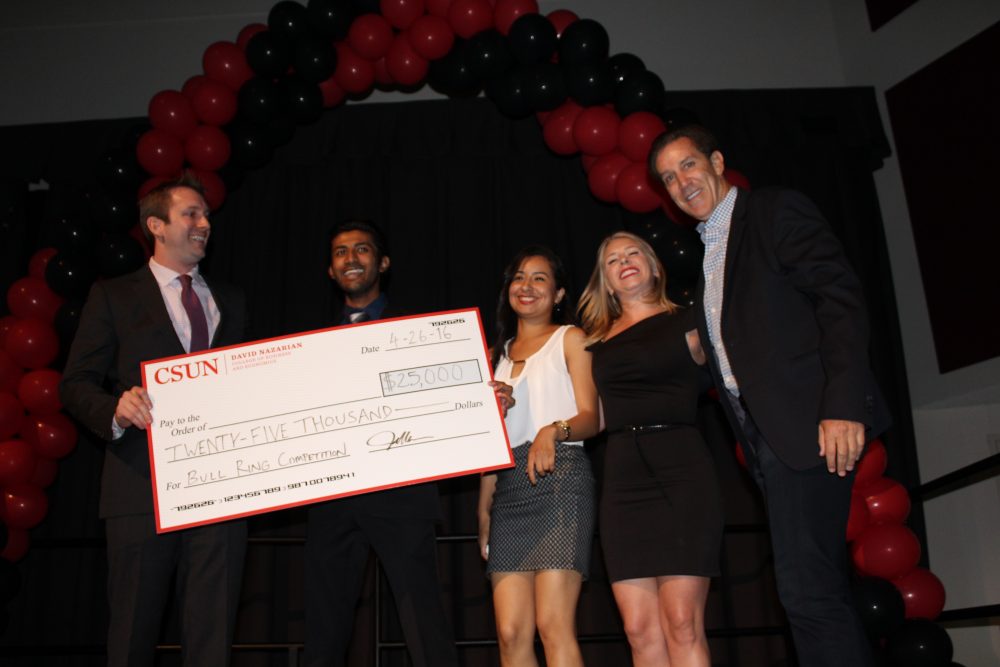 Confidence high, lights low and teams running through their presentations were some of the elements that embodied the atmosphere of the Bull Ring Finals.

The Bull Ring Finals are a “shark-tank”style event hosted at CSUN where students compete for $50,000 in prize money by pitching their original and creative ideas for new business ventures. The event was hosted by the David Nazarian College of Business and Economics and CSUN’s on-campus incubator LACI@CSUN this Tuesday.

The event opened up with keynote speaker, Nanxi Liu, CEO and Co-Founder of Enplug, Inc., a tech company that builds advanced social billboards inside venues. As a successful entrepreneur rising from her humble beginnings in rural China to being one of the top five woman-led startups to watch, Liu stressed the importance of time management to both the audience and the contestants.

Walmart, Fandango and LDP Print were interested in utilizing their tool, according to Hunanyan. Although they didn’t win, Zaribian said that two investors approached them after the event and expressed interest in investing.

The next team to present was EduCode, whose idea was to teach K–12 children how to code in a collaborative, real-world environment. The team — Arman Aivazian, Jazmin Perez and Ibram Uppal — provides clients with affordable solutions to their development needs.

According to Aivazian, there would be 1.4 million computer jobs by the year 2020.

With the $25,000 prize money, they would be able to break even during their first year, Uppal explained.

Aivazian said that EduCode would appeal to 100 percent of potential consumers, but Zack Schuler, one of the judges and a CSUN alum, was skeptical about this statement due to their $200 monthly membership fee.

Schuler said that with this fee, EduCode would appeal to the top five percent of potential consumers, if not the one percent.

Take Sessions took the stage next. Created by Jonathan and Joseph Saeidian, Take Sessions offers a seamless platform to take music lessons in three ways, according to Saeidian. The three ways are in home, in studio or online. It is currently operating in Los Angeles and is growing with minimal investment.

The average rate Saeidian charges for music lessons is $50 per hour and would take a 40 percent cut of the profits, which didn’t sit well with Schuler.

Saeidian countered this by saying as the company grows, they would only need to take a 25 percent cut of the profits. Ideally, Take Sessions would charge $80 per hour, but is charging $50 to stay competitive in Los Angeles, according to Saeidian.

Next up was ThinkFit, a service provider created by Mark Swanson, Brian Swanson and Rene Sanchez, that helps improve the lives of those affected with mental disorders.

Using an emotional appeal, Brian Swanson told a story about how he had lost a friend to depression.

While competitors saw exercise as a recommendation, but ThinkFit saw it as a necessity, Swanson explained.

“Exercise is the answer,” Swanson said.

ThinkFit would deal with people who were mildly to moderately depressed, according to Swanson.

The judges were confused with their business model.

“Is it a center?” Schuler questioned.

Swanson said that they plan to have their own clinic, but currently, ThinkFit would go to the customer.

According to Swanson, their competitors assist inpatients, while ThinkFit would be assisting outpatients.

The final team to present was Vibe Probiotics, the team who had won the semi-finals. The team, Abed Rahman, Erika Elizalde, Katie Teevin Jonathan Lopez and Mackenzie Bacalzo, are, “Saving the world, one gut at a time,” according to Rahman.

Vibe Probiotics boasts 50 to 100 percent of recommended daily electrolytes. The product, which comes in chews, water and power sticks, aids in digestion and also helps maximize energy, according to Rahman.

According to the group, consumers spent $58 billion in 2013 on the probiotic market.

One of Vibe’s main selling points was the way the probiotics were packaged. The live cultures are suspended from the liquid in the cap, keeping the drink as potent as possible.

Other probiotic drinks, according to Rahman, have the live cultures already in the water.

Rahman remarked that most probiotic drinks, like Kombucha and Kevita, have their live cultures already in the liquid, rendering most of the live cultures useless.

First prize for the competition is $25,000, while second place is $10,000 and third is $5,000. The top three competitors also get a three-month membership to CSUN’s incubator, LACI@CSUN as well as $5,000 of legal startup services from the events sponsors.