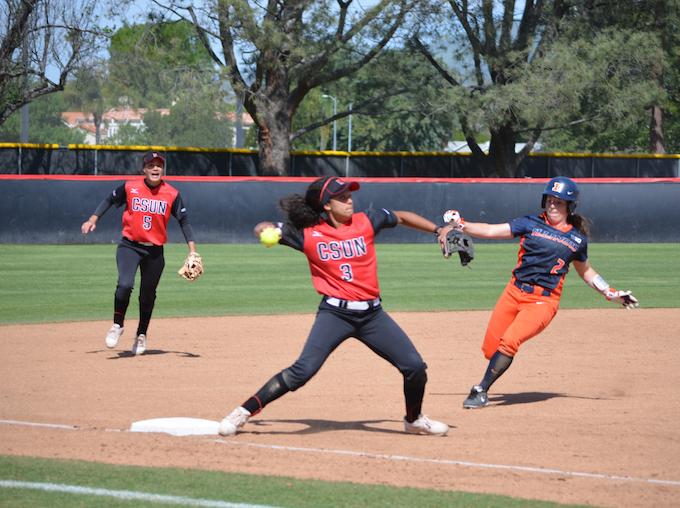 Junior pitcher Daphne Pofek pitched a complete game while giving up four hits, one run and striking out four batters.

Pofek’s solo home run in the fifth inning sparked the Matadors’ offense. CSUN grabbed two more runs in the sixth inning then unleashed eight runs in the seventh inning to put the game away.

Pofek said she went up to the plate in the fifth inning thinking she had to come up big for her team.

Several Matadors then forced two walks as the batting line-up cycled back to Kliebenstein. She bombed a three-run home run to push CSUN’s lead, 11-1.

Kliebenstein finished with a career high three hits and three RBIs in the game. She also had two runs.

Kliebenstein said the team knew it had to pick it up because the games mean so much toward the end of the season.

“We’re just telling each other ‘let’s just do it one by one, it’s not going to get done with just one swing,’” she said. “[Then the runs] all just came in.”

Junior outfielder Taylor Glover started the game with a single for CSUN.

Following several errors by UCR, Glover managed to score an unearned run while Horvath advanced to second base. Horvath robbed third base but was stranded at third as UCR retired the next two CSUN batters.

The Highlanders tied the game at one in the fourth inning on a wild pitch.

Fast forward to the seventh inning and CSUN’s offense was back in action.

Junior catcher Karlie Habitz advanced Horvath to second with a sacrifice fly after Horvath’s lead off single. Senior first baseman Ariana Wassmer pushed Horvath over to third with a single.

Pofek put the ball in play as she was thrown out at first base, but pinch runner Sabrina Garcia advanced to third on an error and Horvath scored to give CSUN a 2-1 lead.

Kliebenstein brought Garcia home on a single to extend the lead to 3-1.

She said she didn’t execute her on her previous at bat, so she had to pick it up for her team.

“So I put them on my back,” Kliebenstein said.

UCR responded with a lead off single in the bottom of the seventh. The runner managed to reach third on a sacrifice fly and a CSUN error. The Highlanders then cashed in on a run with a single.

The Matadors shut UCR down immediately after with a double play to win Game 2, 3-2.

CSUN’s Pofek had her second complete game in the doubleheader. She gave up five hits, two runs and struck out four batters.

Pofek also had two hits and an RBI as a batter.

“My focus was not [to think about] being tired, [or] what could go wrong,” she said. “I [was focused] on winning.”

The Matadors return to UC Riverside on Sunday for the series finale against the Highlanders at 1 p.m.