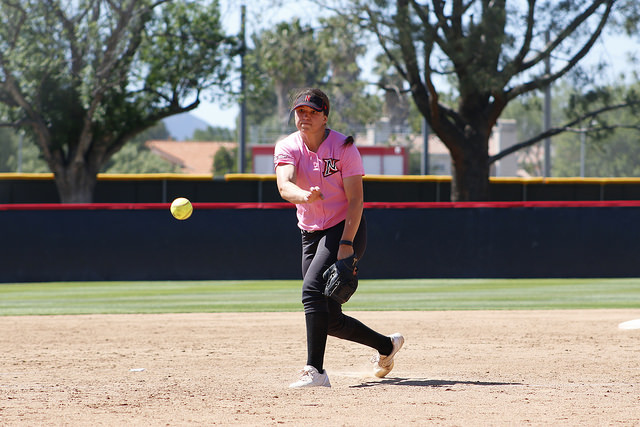 FILE PHOTO - Junior Pitcher Daphne Pofek throws out a pitch against UCSB on April 17, 2016. She has already surpassed her win total from her first two seasons combined with 18 this season. Photo credit: Josue Aguilar

The CSUN softball team continued its dominance on the road by shutting out UC Riverside, 2-0, on Sunday.

With the win, the Matadors secured a three game sweep of the Highlanders, improving their record to 30-20 overall and 10-5 in conference.

The Matadors remain in second place in the Big West Conference, trailing just Cal State Fullerton, who is 13-2.

Junior starting pitcher Daphne Pofek earned her 17th win of the season with another complete game. She holds a 2.62 ERA, the lowest on the team.

The game looked like it was going into extra innings as it remained scoreless until the seventh inning when CSUN scored the only runs of the game on a fielder’s choice and a single.

Sophomore infielder Savannah Horvath, who got the first RBI of the game, has dominated hitters all season long.

Also having successful at-bats is junior catcher Karlie Habitz, who singled in the second run of the game.

She is tied for second place with six homers and is third in RBIs with 27.

The Matadors look to improve their conference record with the remaining seven games left in the season.

CSUN hosts Cal State Fullerton in a doubleheader at home May 6 at 1 p.m. and 3 p.m.