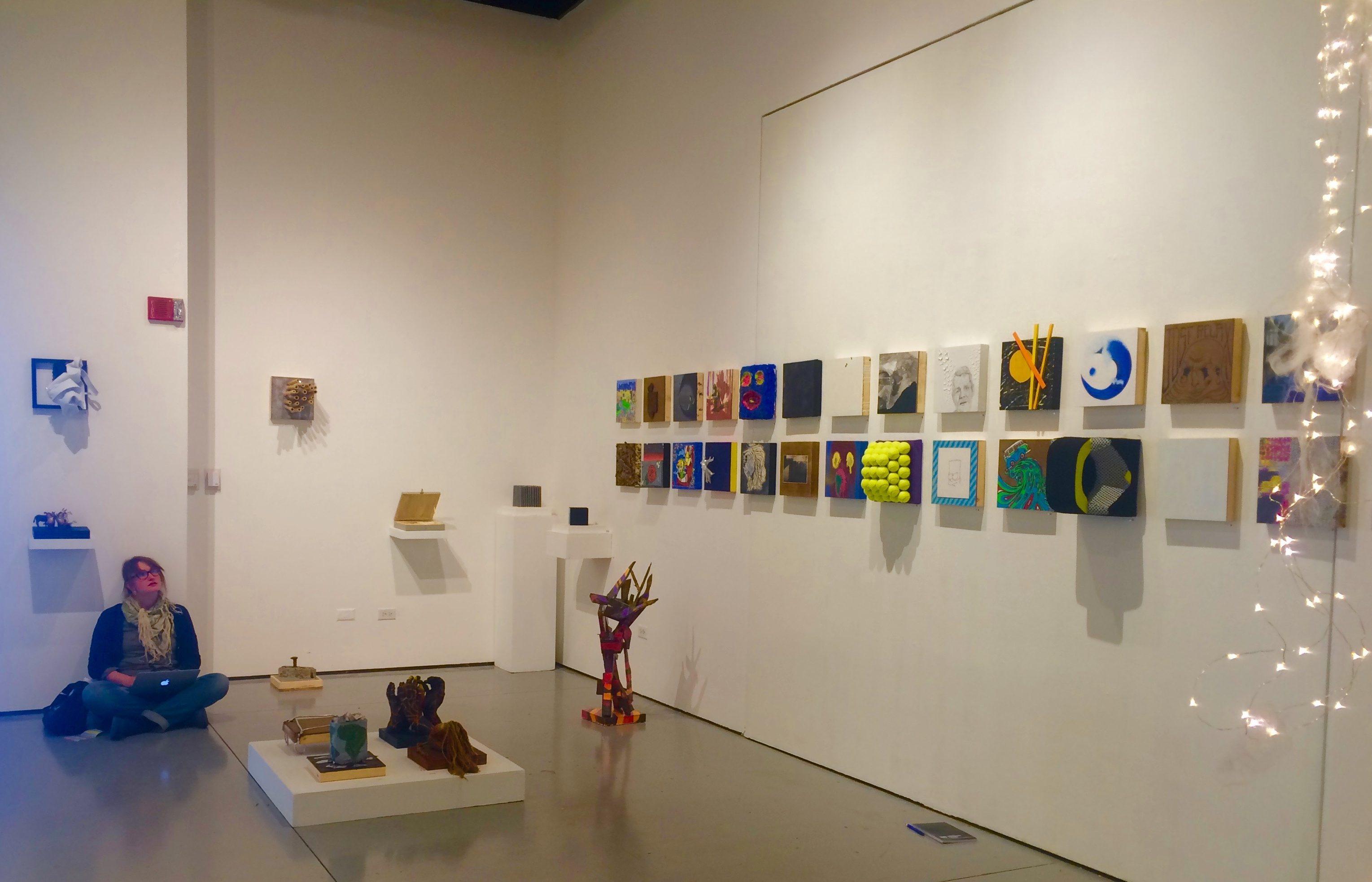 On Friday April 29, the CSUN Sculpture Organization held its award ceremony for the First Annual Shop and Show Sale. Numerous events were held in the days leading up to it including a gallery previewing and a lecture by Los Angeles artist Sean Duffy. (Lindsay Baffo/The Sundial)

It’s Friday afternoon and the campus is clearing out for the weekend. Parking spots vacate in masses. For a second, one might think the campus is empty give or take a few hundred of the more than 40,000 students that are attending CSUN this year.

Sitting cross-legged on the floor of the West Gallery is Emily Jones, secretary of CSUN’s sculpture organization. She and Tanner Gilliland-Swetland, the shop’s treasurer, spend their Friday putting the final touches on an exhibition that acts as one-half gallery, one-half anonymous art sale. Inspired from a similar event at California State University Chico, this is a first-ever for CSUN.

“The line was out the door at four this morning,” Jones said. “I think we were still asleep.”

The two go back and forth calling out numbers, a DIY system of checks to ensure that every panel is in place. With over 100 pieces donated, only a dozen were left to purchase by the end of the day.

“It’s the most democratic way of approaching art buying,” Jones said. Pieces are sold for $20, and faculty and alumni can contribute work. CSUN alumnus Jefferey Vallance even contributed a piece. Students who could never afford artwork by their professors might be able to do so “accidentally,” she said.

This is a labor of love for members of the sculpture shop. Preparation has been week long, beginning with a five hour long installation of the gallery on April 23. That Monday, Los Angeles artist Sean Duffy spoke to the organization before acting as judge to the event, all culminating to the awards ceremony on April 29.

There are pre-show rituals: the straightening, the adjusting, the minor modifications down to the display of carrot sticks and hummus on a craft table, which the shop’s president, Kellan King, has made an art form out of.

“People are excited about the idea that we are benefiting the department,” Jones said. “The more energy we put into the organization, the better our degree becomes.”

The school’s budget does not have the flexibility to be constantly replenishing supply, so money generated from the sale goes back to the department. The lab recently purchased a lave which turns wood into cylindrical shapes, as well as a jointer, clamps, drillbits and other necessary staples of an art program’s stock.

Gilliland-Swetland points to a piece positioned on the floor. It’s his. At first glance, it’s brick split in two by a railroad spike. After packing, Swetland found that the concrete had become flimsy and halved involuntarily.

“It was happy accident,” Gilliland-Swetland said, whose use of brick was a metaphor for the individual identity instead of group identity. Inclusion of the railroad spike refers to his interest in American westward expansion. Gilliland-Swetland was a political science major before realizing his affection for art in his senior year.

“There’s a point where you stop making class assignments and start making art for yourself,” he said. Next year, Gilliland-Swetland will attend UCSD for its MFA program.

Engagement is his artistic motive. Gilliland-Swetland encourages people to interact with his artwork on an individual level. He plans to participate in next year’s Shop Show and Sale.

“We’re creating a shop, a program which builds a better legacy,” Gilliland-Swetland said. “It’s self-motivating. We’re taking pride in working with certain tools that people may not have access to.”

CSUN alumni Chuck McClellan and Michael Langdon stand at the exhibit’s entrance. Both have a history with the arts program that dates back to when the two were adjunct professors advanced in welding and metal sculpting. Langdon graduated with a B.A. in 2001 and has since worked in graphic design and studio lighting for “Black-ish” and ’90s cult-classic “The X-Files.” McClellan, who graduated with a B.A. in 1967, is well-versed in 3-D imaging. This time, they come as supporters.

“I want to be able to support this art program by buying a piece,” Langdon said.

The sentiments of the sculpture shop are similar. It’s less about singular recognition and more about inclusivity and encouragement. By 3:50 p.m., artists, once anonymous, reveal their pieces to one another. There’s a hum in the hall and it echoes out into the foyer, a kind of buzz conducive to people engaging in passionate discussion and shared ideas.

First place went to Emily Jones. She couldn’t believe it.