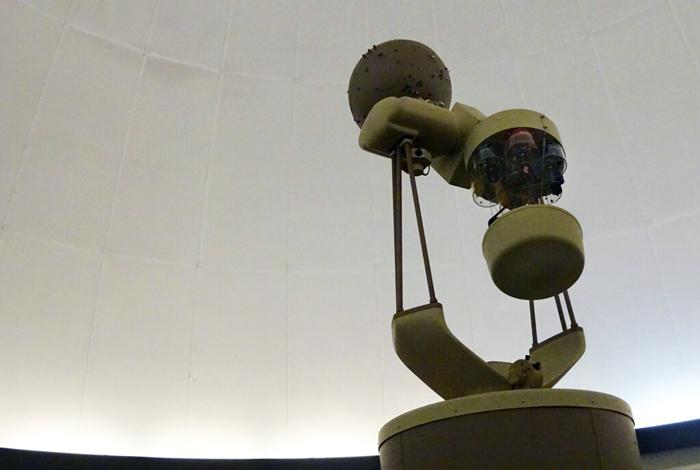 Visitors have a chance to view thousands of glistening stars that are projected onto a 40-foot dome in the Donald E. Bianchi Planetarium at CSUN.

The planetarium show offers the chance to get a glimpse of the universe and its constellations, planets and other celestial bodies, which could easily be overlooked or masked by the polluted and bright city of Los Angeles.

Dr. Jan Dobias, professor of astronomy at CSUN and program director of the show, said that students of astronomy and visitors who are not familiar with stars alike can learn about the wonders of space during their Spring Sky shows this semester and their various guest speakers.

“I have been doing the Planetarium show for over ten years and I encourage more people to come. It’s a wonderful opportunity to learn. Some students don’t even know that we have a planetarium and that we have this show on campus,” said Dobias.

David Jewitt, Professor of Astronomy at UCLA, is one of the various guest speakers that attend the shows in an effort to share their knowledge and expertise in the different fields of astronomy. Jewitt spoke about his research on comets and expressed his ongoing ambition to learn more during his section of the show, “Comets: The Big Picture” and was hand-picked by Dobias because of his knowledge.

“When I was a kid I saw some meteors in the bright sky above London. I asked my mother what they were and she said there were shooting stars. I asked her what is a shooting star was and she said, ‘just a star that shoots’. I then figured out that my mother didn’t know what they were and that kind of exciting because I basically I realized that adults don’t know about stars,” said Jewitt laughing. “It was kind of cool that I could ask questions that people don’t know the answers too and that was great.”

Francis Santoyo, art student at Pierce College said he loves all things that relate to space and found that the Planetarium show had a lot to offer about astronomy.

“The show was truly amazing. When the lights turn off and all you see are thousands of stars on the Planetarium dome, it’s truly breathtaking. It felt like I was literally looking up at the night sky in Alaska,” said Santoyo. “The show helped me with a new painting of the Milky Way I am currently working on because I have a better understanding of it.”

Both professors expressed their goal to show everyone that science, although educational, can be entertaining at the same time. They encourage more people to attend.

“People have been scared away from science from some ugly event from their childhood by their parents or their friends and teachers that scared them away from it and actually it’s kind of fascinating and you can understand a lot of information using common sense,” said Jewitt. “People are horrified by mathematics in the United States. That’s the big phobia but that shouldn’t scare people away. Science is where it’s at. It’s the coolest thing and the best idea we have ever had.”