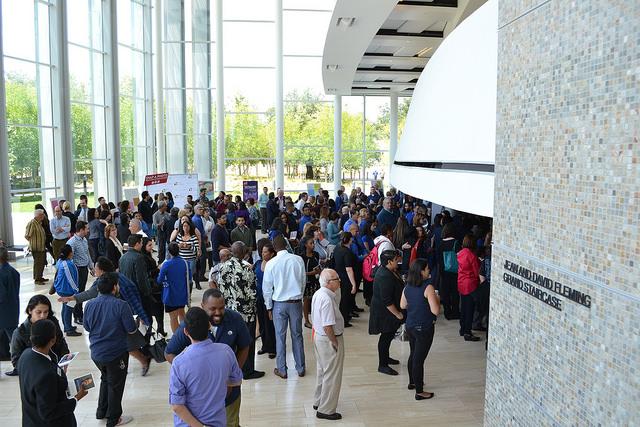 José Luis Vargas was known as a friend, mentor, father and leader.

He dedicated more than 45 years to CSUN’s Educational Opportunity Program. Students, faculty and community members filled the Valley Performing Arts Center for a celebration of his life Friday.

William Watkins, CSUN vice president of student affairs and dean of students, opened the ceremony. He welcomed the audience to stand and honor Vargas’ life.

Watkins said Vargas was known to encourage students to take advantage of the opportunities available, to fight for justice and to show courage.

Vargas served as the EOP director and worked closely with the California State University Chancellor’s Office to expand EOP policies.

The ceremony included several tributes including a drum performance from American Indian studies professor Brian Burkhart and a poetry reading from sociology major Ashley Moran, an academic mentor for EOP.

Vargas’ son, Damien Vargas, attended on behalf of his family.

The ceremony ended with a video tribute of Vargas’s life. His son thanked everyone who showed and recognized his father’s work.

“To the current EOP students and former ones, staff and everyone who is a part of the program,” Damien said. “Continue what you do because there are big shoes to fill and we are here for a reason.”

Vargas was born in Mexico City in 1949. His family moved to the Echo Park in Los Angeles and Vargas graduated from Belmont High School in 1968.

Vargas was part of the EOP since its start in fall 1969 when he was a member of the Summer Bridge Program. He began working as a student assistant and became involved on campus in social and political issues. In 1994, Vargas became the EOP director.

“He showed everyone the same love, care and guidance to see them succeed,” CSUN and EOP alumnus Sean James said.

The programs Vargas created were meant to help students develop skills to reach their academic and professional goals. EOP provides services to low-income and first-generation college students, according to the CSUN site.

“This day was difficult,” Franklin said. “[But] also inspiring because this is someone who spoke into my life and changed it. José Luis is CSUN.”