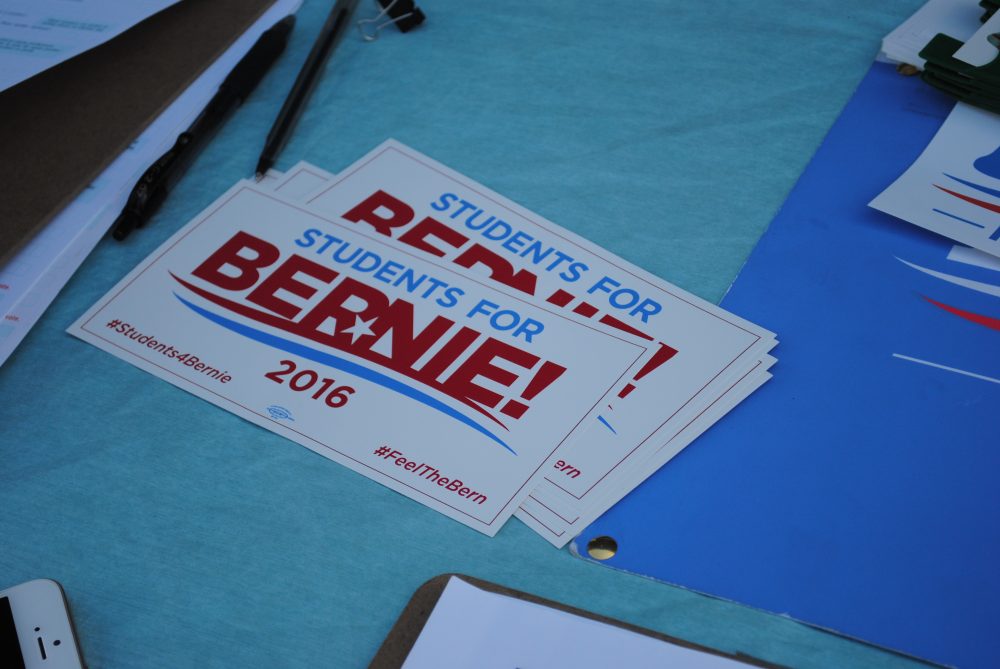 CSUN students for Bernie, give out bumper stickers to passerby's in front of the Oviatt Library. (Josue Aguilar/The Sundial)

As the 2016 presidential election approaches, students on campus are supporting their favorite candidates through rallies, volunteering and bumper stickers.

We learned in the 2008 election that college students can have an impact on deciding who the President of the United States will be. According to an analysis done by The Center for Information and Research on Civic Learning and Engagement, 70 percent of college students in 2008 were registered to vote and 87 percent of those registered students voted on Election Day.

College students made up 39 percent of the 18 to 24-year-old population in 2008, yet made up 48 percent of youth who voted. Showing student involvement can play a significant role in presidential elections.

Now in the upcoming election, CSUN students show how they are getting involved and supporting their favored candidate.

Diane Stewart, a child development major, is for Bernie Sanders. “I’ve been trying to help them [CSUN students for Bernie Sanders] out as much as possible, coming here and doing tabling with them. So reaching out to potential Bernie supporters and then asking them if they’ve registered to vote, checking if they’ve affiliated themselves with a particular party. So that they can vote on June 7th for Bernie, if they plan to support him”said Stewart.

Stewart volunteers for CSUN students for Bernie, a group mobilizing the campus for Bernie Sanders. But that’s not the only way she’s getting involved.

“At home, I do phone banking, I’ve done some Facebooking; which is just sending out notification to friends of events, you know the voting dates in each state.” Stewart said.

“Just showing the presence. There’s not a lot of media coverage on Bernie rallies,” Rodriguez said. “Not like when Hillary has a campaign around town or Trump because of his radical views. There’s not that much media coverage, so if a lot of people start going there, the media has to pay attention.”

In contrast, Jose Sanchez, a business management major, doesn’t have time to volunteer or rally for his support of Hillary Clinton.

“At the moment the only way I am involved is with a bumper sticker on my car,” Sanchez said. “With school and work it’s hard to find time for volunteering, but feel that they are a good way to get students involved because it’s letting everyone else know who they are voting for.”

As we have see students are finding different ways to get involved in this year’s elections. But what about the candidates is prompting students to get more involved.

For Stewart, it took some time to warm up to Sanders.

“I watched a few of his debates, and I was kind of like, ‘that guy sounds like kind of crazy.’ Doesn’t sound like he can make it, his ideas are too out there,” Stewart said. “But then as I listened more and more, I realized okay, he actually has some plans to back up what he’s saying.”

“I just like his political views, it’s changing the mentally of the citizens. I like the idea of focusing on the problems here, domestic problems instead of foreign problems,” he said.

On the other hand, Sanchez is more pragmatic on his candidate of choice.

“I feel that the reason that I am supporting her is that she talking about change that is possible and that will benefit society,” Sanchez said. “For example, I feel that there is no way that Bernie Sanders free college will work, but on the other hand Clinton’s debt-free plan where families contribute some money will have a higher chance of succeeding.”

Students are supporting candidates for different reasons. Regardless of the differences, students have been continuing to show their support for the upcoming election.