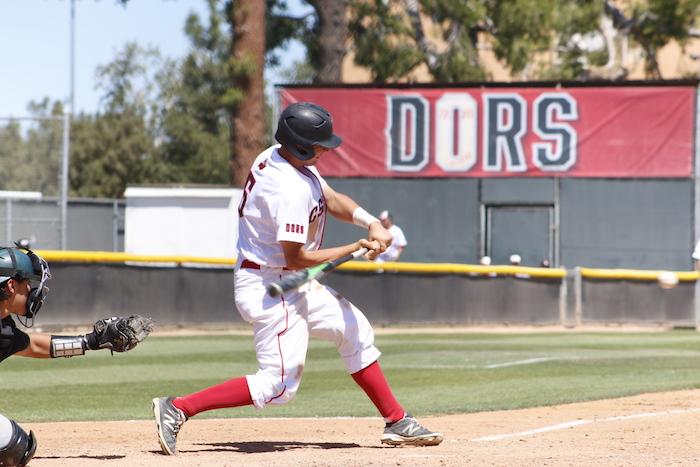 On a cold and cloudy afternoon in Northridge the stage was set for the Matadors to sweep visiting Cal Poly San Luis Obispo.

With a combined 13 runs in the first two games of the series, the Matadors looked to keep their hot hitting going on Sunday.

But Cal Poly’s pitching staff had other ideas.

Just as the weather continued to drop, so did the Matador batters as the Poly pitching staff was able to strike out eight different batters until the ninth inning.

“I think their guy did a great job of changing speeds and changing the sides of the plate, coach Greg Moore said about Poly’s pitching. “It was one of those games that you are seven innings in and you can tip your cap to that point to him [pitcher] and their defense.”

In a game where there were more strikeouts than hits, the Matadors struggled to find their offense. Just as the Matador bats weren’t connecting; neither were the Poly batters, thanks to CSUN’s starting pitcher Andrew Weston, who was able to keep the Matadors in the game.

Moore said he was attacking the fastball really well.

“[Weston] had a little bit of a slider working for him,” he said. “I really think [Weston] was trying to grasp that pitch throughout out the game, [and] it probably took him away from focusing on the score.”

Weston’s only mistake came in the top of the third when he allowed a towering single into right field. Later in the inning, the runner stole second base, putting him in scoring position.

The next batter hit another single into right field, allowing the runner to score from second to make the score, 1-0, Cal Poly.

Weston said he tried to give his defense something to work off of.

“If I keep them silent out there I know that they will have my back in here,” he said. “I just try to make the hitters put the ball in play and make my defense work, so that way when they come back in here they can roll with it and roll with the good inning that I had.”

With two pitching changes made before the seventh inning, coach Moore made one more pitching change which might have saved the game for the Matadors.

In a tough inning with a runner on third base and two outs, Joe Ryan was able to strike out a Poly batter to get out of the inning unsaved.

Heading into the bottom of the ninth, it was Poly’s game to lose. With three more out left in the game, this was the Matadors’ last chance to tie the game or go ahead.

The Poly pitching staff was able to get a pop-up sac fly from Branden Berry, which allowed the Matador runners to advance to second and third base, respectively.

You could feel the momentum shift.

A good-eye from Albee Weiss merited a walk to load the bases for the Matadors.

The next batter, Nolan Bumstead, hit another sac fly to score the tieing run.

The nerves began to unravel for Poly.

Another walk was forced by Justin Toerner to load the bases, again.

Next was Dylan Alexander.

As if the script had already been written, the Matador catcher hit a towering ball into right field, allowing the winning run to score and the rest of the Matadors’ team to rush the field in jubilation.

They had completed the come-from-behind win in spectacular fashion, a bases loaded walk-off hit, sealing the Matadors win, 2-1.

Alexander said he was really calm at the plate because the game was tied, and he knew the team was going to win at one point, even if he struck out.

“And I ended up getting a good hit.”

CSUN will stay at home next weekend to take on the UC Davis Aggies, beginning at 3 p.m. on Friday, May 13.