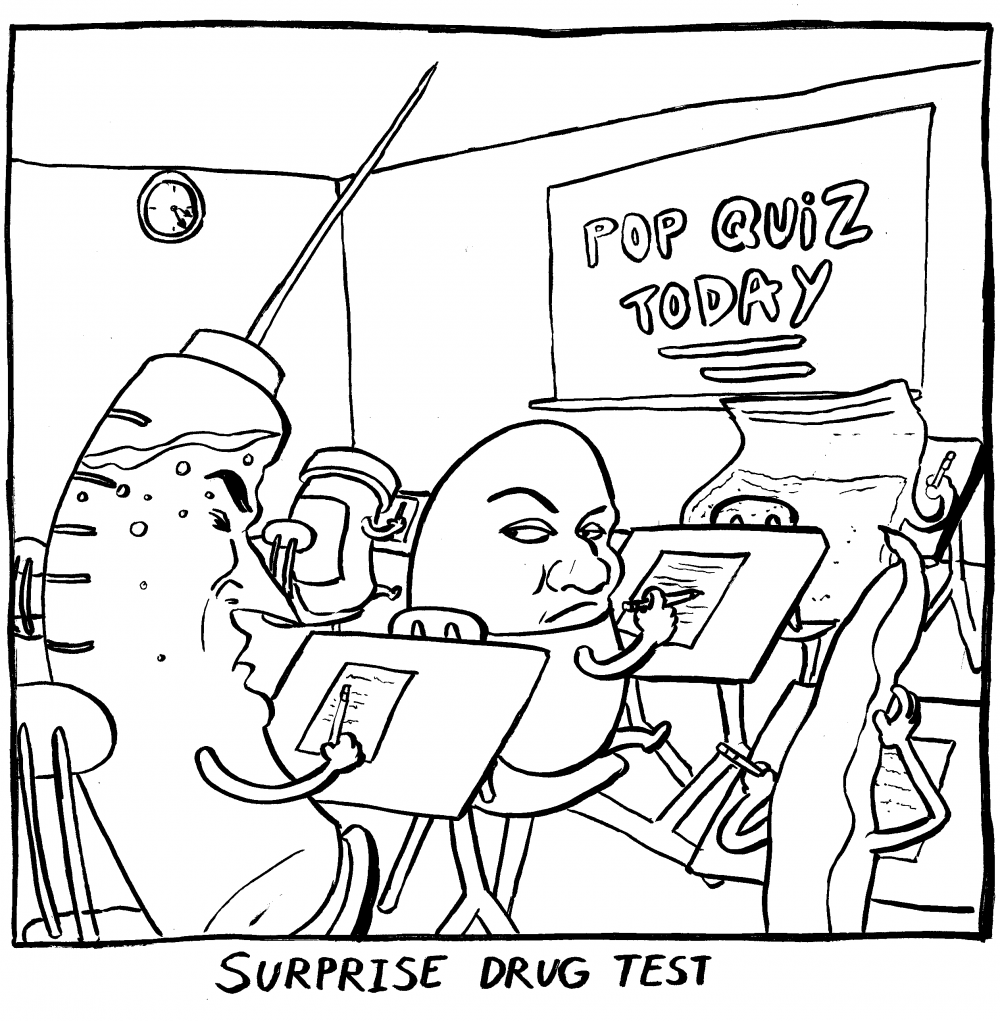 Over the last 30 years, the NCAA Convention has worked on creating the most appropriate testing methods, in compliance with third party administers, to prevent the use of performance enhancing drugs (PEDs) among its athletes.

He said there has been a small increase with antiestrogens.

“In a performance enhancing sense, they are many times added to supplements or taken to counter the side effects of steroids,” Bockelman said. “The other substances that are trending are Selective Androgen Receptor Modulators (SARMS).”

He said SARMS are steroid-like in saying what they can accomplish.

To keep up with the ever-changing medical field, DFS works heavily with the NCAA on any issues or plans for educating athletes on drug testing. Yet the process stays the same.

“They don’t know when they will be tested and that is part of the unpredictability of drug testing, which makes it a better deterrent,” he said.

In championship testing, street drugs and stimulants are tested for, as opposed to PEDs. DFS is authorized to test during any round in any of the 86 NCAA championship events. All schools get tested in the selected round.

The first step at DFS involves identifying the sports that are going to be tested.

Bockelman said there is an element of focus on the sports that have historically been at the highest risk. Those sports are football, baseball and lacrosse.

Once the school is notified of which sports will be tested, a squad list is then sent back to DFS.

From that list, a random number generator is used to select a refined number of athletes. That roster is sent to the school and the student-athlete is notified. The process is usually done within a 24 hour period.

According to the NCAA website, the penalty for a positive test for a performance-enhancing drug is strict and automatic.

A first offense results in a loss of one full year of eligibility (25 percent of the athlete’s total eligibility). A second positive test for a PED results in the loss of all remaining eligibility.

Students that test positive in the street drug category are withheld from competition for 50 percent of the season. A second offense for street drug violations results in the loss of one year of eligibility.

Amy Millstone, CSUN’s associate athletic director, strategic communications, said she is not able to share the university’s specific policy or results due to the Family Educational Rights and Privacy Act.

Institutions are also allowed to administer their own private drug-testing outside of the NCAA guidelines.

Millstone said CSUN conducts regular drug testing through an independent third party but could not disclose any further information.

One gray area that has sparked recent discussion on the NCAA committee is the medical exemption process, specifically regarding marijuana.

The committee overseeing this process is the Competitive Safeguards and Medical Aspects of Sports (CSMAS).

Bockelman said that in the NCAA structure, there is no exception for medical marijuana and it is still considered a violation of the drug testing program.

He said medical marijuana makes the agenda many times for the CMSAS. It is also well discussed.

“The addition of marijuana to the testing plan occurred 30 years ago when the program first started,” Bockelman said. “If it is not going to be tested for, it would have to go through the NCAA legislative process and be put to a vote by the NCAA membership.”

Bockelman said the legislative process is not as simple as saying marijuana isn’t a problem in terms of competitiveness so it can just be pulled off of the testing panel, but it has to go through a administrative process.

DFS will occasionally travel the country to conduct presentations on the educational side of testing. it also has a social media presence where DFS puts out information on substances that may be trending positives or information about Food and Drug Administration (FDA) changes.