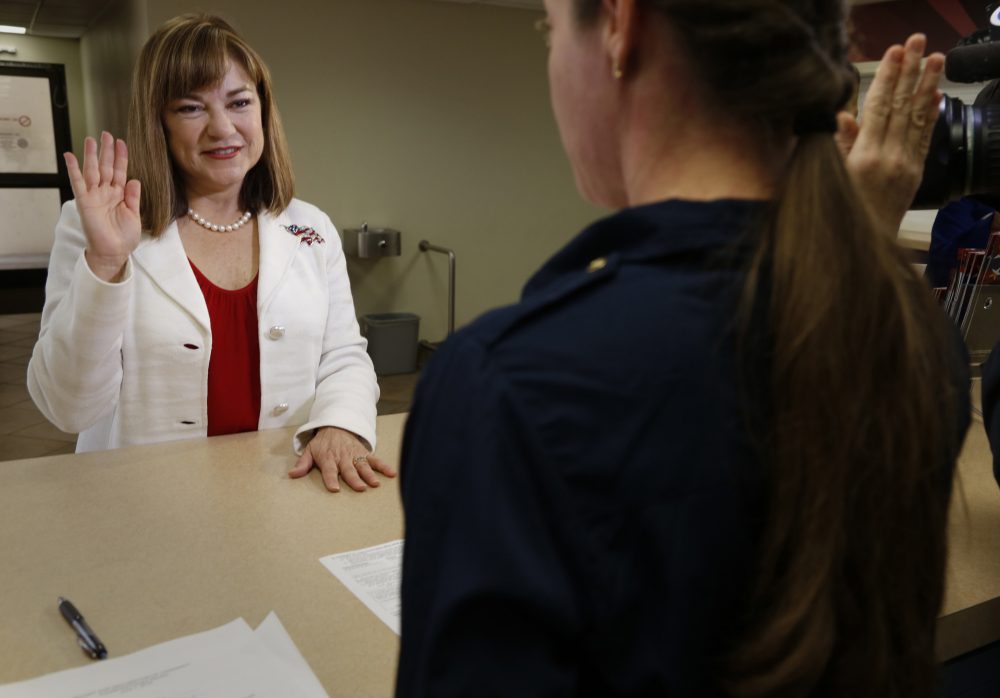 U.S. Rep. Loretta Sanchez (D-Calif.) files her paperwork to enter the U.S. Senate race, at the Orange County Registrar of Voters Office in Santa Ana, Calif., on March 8, 2016. After the paperwork was filled out and a fee was paid, Sanchez was administered an oath by Office Assistant Julianna Maillot. (Mark Boster/Los Angeles Times/TNS)

California voters will elect a United States senator in the upcoming 2016 November elections for the first time since 1992.

Thirty-four candidates are running to replace current California Senator Barbara Boxer, who has decided not to pursue re-election after 24 years.

Rep. Loretta Sanchez, D, current U.S. Congresswoman of the 46th District of California, is one of the candidates running for the senate position.

Sanchez held a conference call Monday to discuss the issues she hopes to address in office.

“Education is incredibly important, especially given my background,” Sanchez said.

Author of the “All-Year ACCESS Act” and “Chance Act,” Sanchez has introduced many bills to financially assist students and improve graduation rates in her effort to pursue affordable education.

“A lot of our students are trying to graduate on time, and not in the six or seven years that it’s taking right now,” Sanchez said.

Also a believer of President Obama’s stance on free community college, Sanchez assisted in the new free-tuition plan that will be implemented at Santa Ana College in the upcoming fall semester.

The community college announced this week that Santa Ana Unified School District students will get free tuition during their first year.

In addition to free-tuition, Sanchez has also worked toward allowing bachelor’s degrees to be obtained at community colleges as another step to make education more affordable.

This idea has also been approved at Santa Ana College and by fall 2017, fifth-semester classes will be offered.

Sanchez explained that although the money for funding such issues may be a concern for some, she is experienced in redirecting funds for necessary projects.

“I sit on the committee that spends the most money in congress, the defense committee. Last week the republicans voted to increase the spending on nuclear weapons, above what the president and the pentagon had asked for, by more than $300 million,” Sanchez said. “So I know where the money is. Last year I was able to take $700 million from that defense committee and redirect it in other areas because I know the numbers so well.”

Despite redirecting funds, Sanchez explained she intends to make sure no money is wasted while keeping the military and country safe.

In addition to pursuing affordable education, Sanchez has been an advocate regarding the importance of the drought issue in California.

“When I started in congress over 19 years ago, the very first project I funded was the Groundwater Replenishment System here in Orange County,” Sanchez said. “It’s the largest factory in the world for water recycling.”

The system takes “highly treated waste-water” and purifies it through multiple processes to create distilled water that meets state and federal drinking water standards, according to Sanchez and the Orange Country Water District website.

“So 90 percent of the water we use in Orange Country is completely recycled. We can do this up and down the state of California,” Sanchez said.