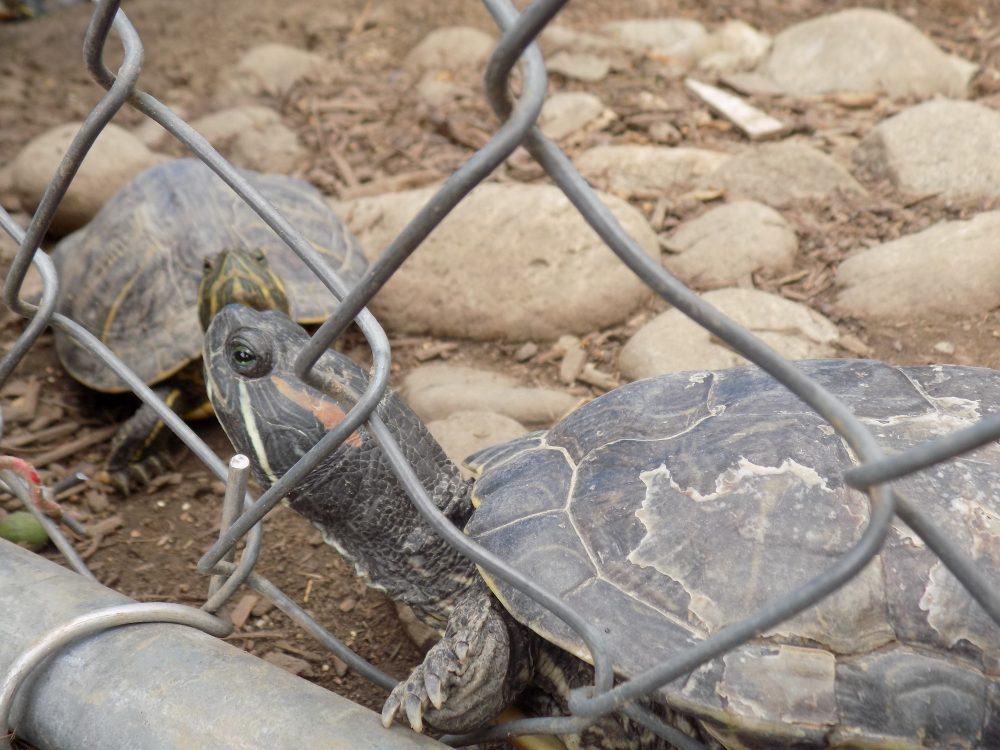 Turtles from the CSUN pond, sunbathe in their Temporary Turtle Habitat, set up by CSUN's PPM during construction. Photo credit: Nicollette Ashtiani

Although the excess biodiversity at CSUN’s pond may have been the cause for its costly makeover, the animals are here to stay.

Recently, the Sundial investigated a claim that suggested the red-eared slider turtles, that have been thriving in the pond, were extracted and placed into cramped crates to be sold to a vendor.

Although the red-eared sliders are an invasive species, keeping the turtles at the pond may be the best option, CSUN Biology professor Robert Espinoza said.

For the past five years Espinoza and two other biology professors, Casey terHorst and Tim Karels, have been taking their classes out to the pond to monitor the demography of the turtle population. They capture, study, tag and release the turtles to annually compare data and develop a yearly census.

“I think that we’re making good use of something that there is really no way to stop,” Espinoza said. “People are going to continue to buy these things unless they’re made illegal, which would be a good idea.”

As one of the most commonly sold turtle breeds that have ability to adapt to many environments, red-eared sliders currently live on every continent except Antarctica.

The red-eared sliders have been an invasive species since the 1930’s, but peaked during the era of the popular television show, Teenage Mutant Ninja Turtles.

Often unaware of the turtles longevity and eventual large size, owners typically release their pets, in the wild or in areas like the CSUN pond.

“The sad part is that everyone has been coming to drop off their animals,” said Espinoza. “They think they might be doing something better for the animal, and in some cases they might be. But then we have this overpopulation problem.”

Yet when red-eared sliders are released in the wild and co-exist with native turtles, they usually out compete them, Espinoza explained.

To prevent this, the California Fish and Game Commission has made it illegal to release a non-native species in a waterway.

“But if you go anywhere like Balboa park or the L.A. river you’ll see red-eared sliders everywhere,” said Espinoza.

This is why Espinoza believes keeping them in an enclosed location, like the CSUN pond, will help contain the species.

“Better to dump them here than in the L.A. River so they don’t compete with native wildlife,” Espinoza said. “The animals are non-native, the plants are non-native. It’s already a completely contrived environment, which is fine as long as it stays there and things aren’t getting moved around.”

Andy Good, CSUN’s Assistant Director of Engineering Services who has been working on the pond renovation, explained why the project was necessary.

The idea of removing the pond all together was considered, but due to the prominent community that frequents the area, they decided to renovate the area, Espinoza said.

Costing roughly $200,000, the renovation will include a new filtration system, and other enhanced pond equipment that will sustain the pond and wildlife for a long time, Espinoza explained.

In addition to the renovation and the pursuit of the sustainability program, the mud from the previous pond will be used to fertilize the orange grove.

“The mud in the pond is great fertilizer,” said Chet Galland, CSUN Director of Engineering Services. “It’s the same thing as commercial fertilizers. Farmers use it as well.”

Despite the new accommodations for the wildlife, Espinoza still advises people to avoid purchasing these types of pets.

“From turtles, tortoises, domestic birds, rabbits and guinea pigs, we have people always dropping things off that don’t belong,” said Espinoza. “I’m constantly pushing for more education about the animals in the pond. Don’t feed them, don’t drop them off, and most importantly don’t get them in the first place.”

Yet for those who are looking to release their non-native pet, multiple special interest groups will take orphaned animals and adopt them out.

The project will be completed by the end of May.