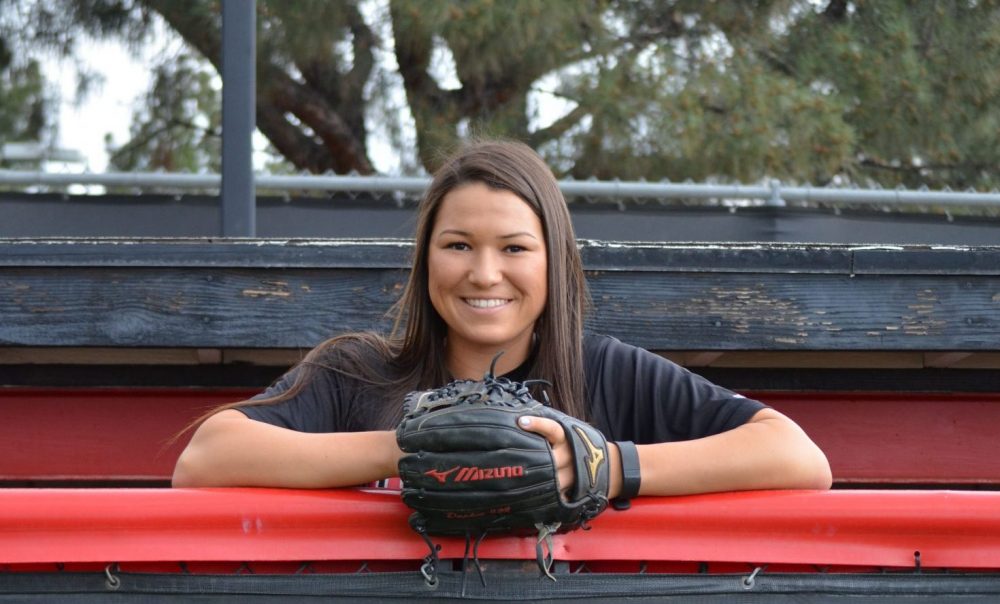 Pofek hangs out in the dugout on May 5, 2016. Pofek holds the lowest ERA on the team with 2.65 in 164 innings pitched. (Anthony Martinez/The Sundial)

Behind a serious attitude is a deep understanding of what it takes to be a competitor that wins.

Daphne Pofek, 21, junior pitcher for the CSUN softball team and a criminology major, has taken on the task of leading her team on the mound and has done so successfully.

After losing star pitchers Zoe Conley and Brianna Elder, the challenge of taking on a lead role was an unfamiliar one to this young pitcher.

Assistant coach Samantha Sheeley said the team approached the situation in a way that any player could take the position, but overall athleticism is why Pofek was fit for the task.

“She stepped up as the year went on and became more comfortable taking on that role,” Sheeley said. “She is very mature in her understanding of what it means and wanting to do it for the team and stepping up to play as a selfless leader.”

She partially credits her results to the doubt that motivated her both on and off the field.

“Coming in, nobody expected us to be good knowing we lost [Elder] and [Conley],” she said. “But I stepped up to the challenge to prove people wrong. That motivated me, that everyone was kind of doubting me.”

One person that didn’t doubt her was Sheeley.

Sheeley knew Pofek had the physical capability for the job so it was just about conforming to the intensity of the situations that were going to present themselves.

“It’s just about putting it together so that she can love the challenge of press situations and being who the team looks to,” Sheeley said.

One of the most important things for a pitcher is the knowledge that their teammates trust their approach.

“There is a confidence we have with [Pofek],” Habitz said. “She has become a leader this season whether she knows it or not. Before every inning she checks in with every player on the field, signaling, ‘Hey I got you, you have me too.’”

Habitz said Pofek’s routine of checking up on her teammates before the game brings a calming effect and prepares them to attack.

Pofek is aware of the team’s mentality when she’s on the mound, but she knows it’s not all her, and the wins are collective.

“We have a good offense so as long as I know I have my team behind me, I know that we have a good chance of winning,” she said.

The desire to win is visible in Pofek’s demeanor when she’s out there and Sheeley said what you see is a true competitor, one that is constantly learning to trust her instincts.

And with more responsibility comes growth and evolution, something Sheeley has definitely noticed in Pofek.

“She’s really learned how to master her change up which to me has elevated her game mentally,” Sheeley said. “In being able to throw multiple speeds and different pitches, she has shown that she has a lot of tools on any given day.”

With all of Pofek’s abilities, Sheeley is most proud of the way she can come back stronger from a tough inning, even in a three game series where she’s pitching against the same team but finds a way to defeat them.

This season has tested Pofek and she has come out fearless.