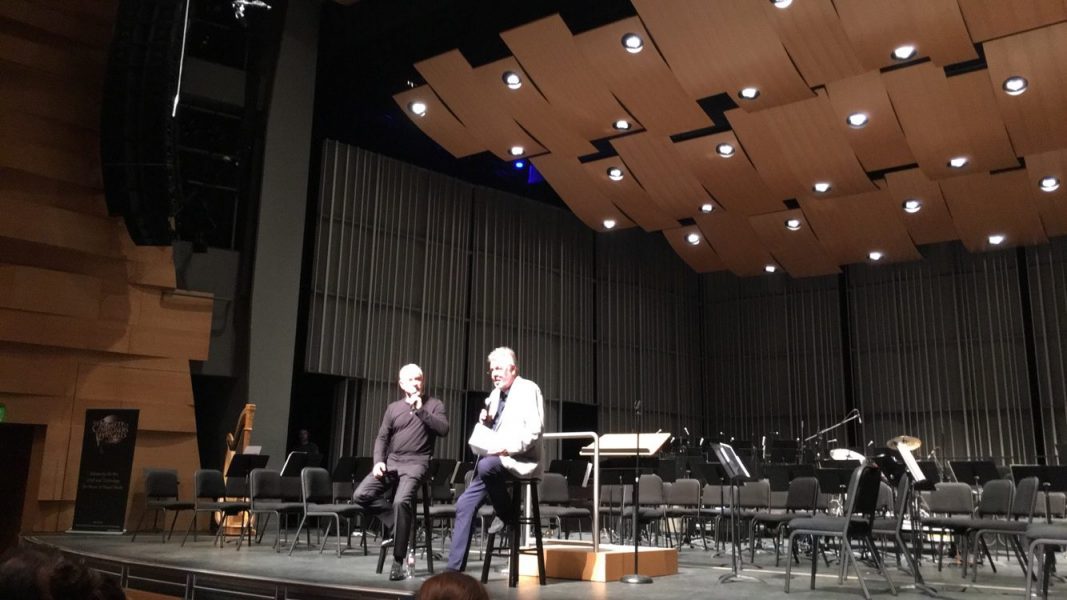 CSUN was graced with the magic of Disney Thursday night as guest composer John Debney, and music majors performed in front of a sold out VPAC audience. The scores on the night were composed and arranged by the students leading up to Debney’s pieces, and the mixture of different genres past and present showed the diversity of the youthful group.

Anton Barins, mechanical engineering major, plays piano and guitar for the ensemble, shared his preparation technique leading up to the show.

“Mostly just drink a lot of tea to help the throat, relaxing music and a light snack help because sometimes you have a tendency to faint.”

Debney who is a well known composer in the film industry graced the audience with a Q&A session before the performance invoking laughter with his lively personality and opened up about his passions and personal favorite pieces.

“The last piece is where my heart lies,” he said.

Debney is referring to his score “Elephants Rebuild the Jungle” from the recent blockbuster hit, “The Jungle Book.”

To start off the night, the Studio Ensemble, a group dedicated to workshopping and performing commercial music was arranged and performed by students.

The concert Media Composition Studio Ensemble was two years in the making, and was a team effort from securing a date and permission from then Provost Harry Hellenbrand and VPAC Director Thor Steingraber, to confirming the date with the Music Department and securing the guest artist.

Daniel Chicco, Business Marketing major, is currently taking a music class and opened up about his anticipation of the show.

“I was excited to go to a concert with a famous musical composer, especially in film,” said Chicco. “I’ve been studying music a long time but movie scores were new to me until this semester.”

The night ended with Debney as he conducted his music from the Jungle Book, and as well as head of CSUN’s commercial and media composition program, Elizabeth Sellers, who conducted the choir and studio orchestra.

“We developed a team for Jungle Book where there is a trust involved, this is why it was so successful,” Debney said.

David Crandall and the Instructionally Related Accounts Board, an arm of Associated Students helped make this happen in a collaborative effort. They provided the funding for this performance, along with help from the Dean’s Office, Music Department, Provost’s Office, VPAC, ASCAP and Society of Composers and Lyricists.

This event was a success by all factions and brought the magic of Hollywood film scoring of present and future to our campus.

“It’s a real coup for us to be able to host this event with someone of his stature,” said Sellers.

This story has been edited from it’s original posting.