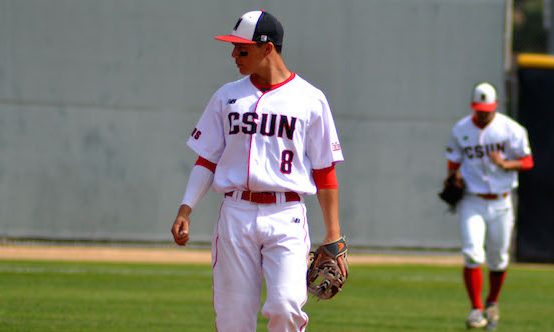 In the final home series of the year, the Matadors were able to steal the opening game from the UC Davis Aggies, 5-4, on Friday.

The Matadors were able to get on the board early thanks to senior Branden Berry, who hit a towering solo home-run into left field to put the Matadors up, 1-0.

In the top of the second, UC Davis capitalized on senior starting pitcher Angel Rodriguez with a RBI-single down the left field line, tying the game at one.

The bats came to life for the Matadors as three of the first four batters were able to reach base in the bottom of the second inning. CSUN scored one run to lead 2-1.

In the top of the fourth inning, Davis was able to get a RBI-double down the left field line, which prompted CSUN’s head coach, Greg Moore, to end Rodriguez’s day.

Senior Nick Viola came in to relieve Rodriguez. Viola was able to get out of the inning unsaved.

The game was tied at two after four innings.

In the seventh inning, the Matadors replaced Viola on the mound for junior right-handed-pitcher Samuel Myers.

He was able to get out of the inning by only allowing those two runs to score.

After sophomore Elias Orona reached base on a walk, junior Fred Smith reached first base safely on a hit, where the ball went right back to the pitcher, and Orona was able to score from second base because of a throwing error by Davis’ pitcher.

Davis continued with the recurring theme. The pitching change also proved fatal for the Aggies.

Berry hit an RBI-single, scoring Smith from second base and advancing Akitoshi to scoring position. In the same sequence, after a throwing error by the left fielder, Akitoshi scored putting the Matadors ahead for the last and final time, 5-4.

After two more pitched innings by junior Conner O’Neil, who struck out five of the nine batters he faced.

The Matadors defeated UC Davis, 5-4. It was CSUN’s second come from behind win in a row.

The series continues Saturday at 1 p.m. at Matador Field.