CSUN athletics not held back by violations 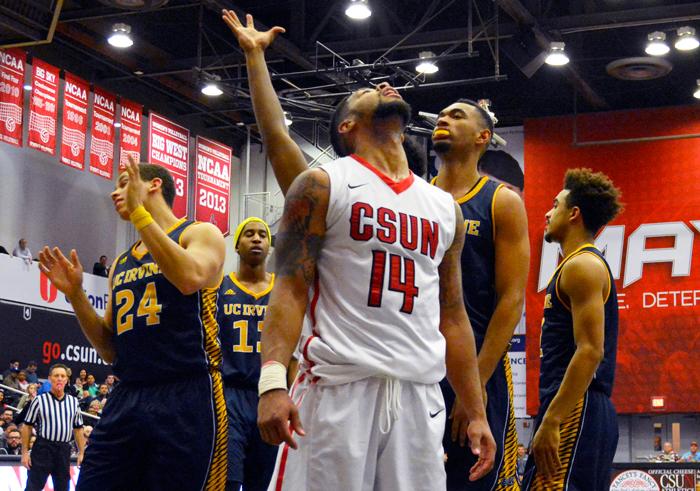 Junior Aaron Parks shows his emotions after making his lay-up while being fouled by the UC Irvine defense in the CSUN loss at The Matadome. (Patricia Perdomo / The Sundial)

Despite multiple violations to university and NCAA policies over the past two years, CSUN athletics continues to have success with recruiting players.

The men’s basketball and women’s volleyball teams have both been marred by these violations.

The basketball team withheld players from participating in games, after investigating suspicious exam results from an online class; while the volleyball team played with an ineligible player for most of the 2014 season.

The violations resulted in the basketball team self-imposing a post-season ban for the 2015-2016 season and the volleyball team vacating 18 wins.

Other athletic programs, however, have been largely unaffected by the violations committed in terms of recruitment.

“The past violations haven’t really affected us, at least in my dealing with it,” Matthies said. “It’s all about finding those kids that fit with what you’re doing.”

Matthies thinks it has more to do with the types of players being recruited.

Players from other programs also feel recruiting is unaffected by the sanctions and violations.

“Our coaches are really good with rules just even now within the team and our hours,” Pofek said. “I just think we have good coaches, they know what they are doing so they know the rules and they make sure they are following them.”

Although the violations haven’t affected recruiting for the softball team, Pofek does point out athletes are monitored more closely in terms of academics.

“I know that there have been a couple of my teammates who worked for the tutoring center who are no longer able to work for the center,” Pofek said. “I mean we’re all still willing to get tutoring and everything that we had before, but now I think it’s just more monitored.”

The men’s basketball and women’s volleyball teams were not able to be reached for comment.

CSUN’s athletic program has an operating budget of $12.9 million, according to staff directory of Brandon E. Martin, Director of Intercollegiate Athletics, which manages over 400 student-athletes. But, the violations and subsequent sections haven’t affected the program’s ability to recruit talented players.

“Playing on a collegiate level is so much fun that you don’t want to risk getting it taken away from you,” Pofek said. “Just losing that experience isn’t worth it.”