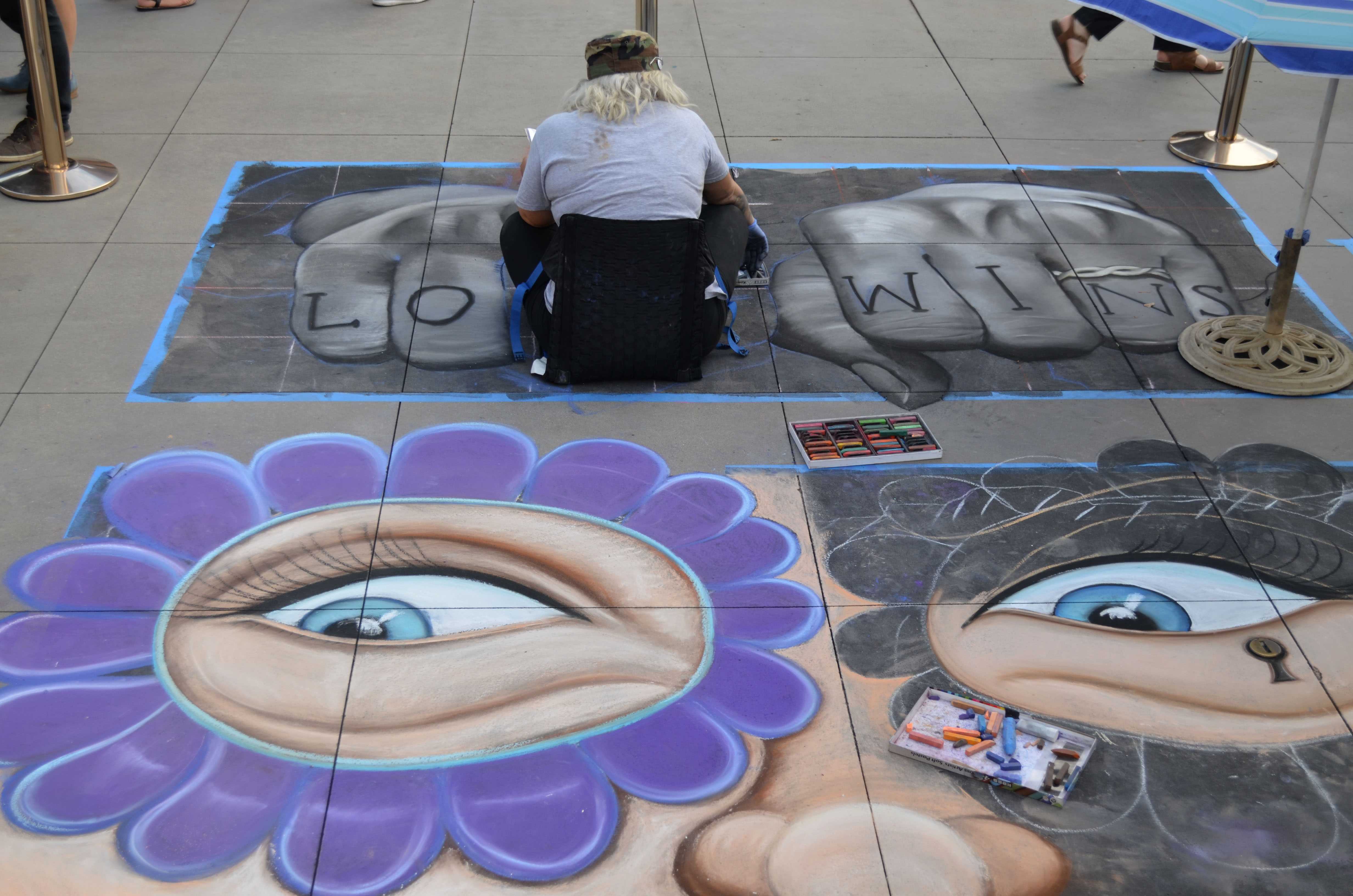 Lesley Perdomo, 35, focuses on her piece with two fists that say “Love Wins” on them. The fists will remain in black and white while the background will be a rainbow gradient. (Anthony Martinez/The Sundial)

Hundreds of artists transformed the walkways of a Pasadena shopping center and surrounding sidewalks into a series of murals with a variety of styles, colors and themes on Saturday as part of a chalk festival.

The 600-plus group of artists whittled down numerous sticks of chalk during the first day of competition in the 24th annual Pasadena Chalk Festival at the Paseo Colorado outdoor mall.

Despite the competitive nature of the festival, the most enjoyable part of the two-day event is the physical effort that goes into each piece, according to 51-year-old entrant Jessica Edelstein.

“It’s really about the impermanence about [the art],” Edelstein said. “It’s purely about the art process and medium.”

Edelstein, who worked in advertising as a graphic designer, first came across the first chalk festival by happenstance in the mid-1990s. She walked past a group of artists working on a mural during the first festival at Pasadena’s city hall and asked if she could join in. Edelstein then worked on a tribute for her grandmother who passed away the previous week.

Edelstein has participated in each year’s festival during its current 24-year run and made the art-filled weekend a mother-daughter activity since her daughter Abby’s birth in 2004.

The festival had such an impact on Edelstein that she recently completed her master’s degree in art therapy because of her passion for the art process, which she discovered as she participated in the festival over the years.

For other participants such as Tom Wang, 43, the festival is a prime canvas for displaying art with social messages. In 2012, Wang paid tribute to Harvey Milk, California’s first openly gay elected official in San Francisco in 1978 who was assassinated that same year. Wang’s submission for this year’s festival was a tribute to the victims of the Orlando nightclub shooting that resulted in 49 deaths and 53 injuries.

Wang’s contest entry took an interactive approach as well. What started as a single large handprint became a series of handprints as attendees were allowed to leave their chalk handprint behind for a donation to support the victims.

“We all need to lend a hand to each other, it’s very symbolic,” Wang said about the piece titled “One Hand, One Heart, One Pulse.”

Another piece, depicting two fists with “Love Wins” emblazoned across them was started by Lesley Perdomo, 35, who was inspired by the way the nation, and to an extent, the world, came together in the wake of the Orlando shooting, she said.

Other tribute-based murals such as ones in memory of David Bowie, Prince and Muhammed Ali proved popular with both the participants and the public, as multiple compositions in their likenesses were on display.