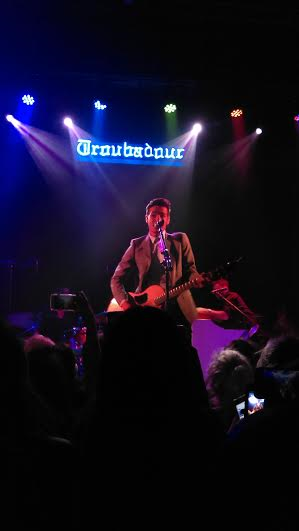 To the 18-year-old musician, performing in Los Angeles used to feel far-fetched, but since he stepped foot in the city three years ago, Jacob Whitesides said it has been the best place for him.

Whitesides, coming from Sevierville Tenn., tries to incorporate elements of bluegrass into his music in addition to his own flare. He said he first drew inspiration from the genre when he went to a bluegrass concert with his dad.

“I was actually forced to go a bluegrass concert,” Whitesides said. “When I heard the music, it was emotionally different from other music that I’ve heard.”

The incorporation of the genre was heard when Whitesides played his first sold out show at the Troubadour in West Hollywood on Saturday night. Along with Whitesides, musicians Taylor Grey and Shane Harper took the stage at the intimate venue.

The opening artists revved up the ecstatic audience with original songs along with acoustic covers of some of today’s popular hits. Taylor Grey performed stripped down versions of “679” by Fetty Wap featuring Remy Boyz and “Crazy in Love” by Beyoncé. Shane Harper performed his original songs such as “Anything But Love.”

Once Whitesides set foot on the stage as he played his guitar, the crowd chanted his name, which allowed him to perform with a higher level of confidence.

“Performing has allowed me to come out of my shell,” Whitesides said. “I have always been super shy and awkward, so performing has given me more confidence and has let me appreciate people more.”

Whitesides performed a medley of songs such as “Ohio” and “Shame on You” from his EP “A Piece of Me” and his full album “Faces on Film” which were both released in 2015.

The pop style heard in some of his songs had the audience jumping as the lights above the stage flashed, illuminating the small venue in purple, red and white. However, when Whitesides performed some of his softer ballads, the lights dimmed and the audience hushed, allowing him to show his flexibility when it comes to performing.

Ingrid Ambriz, 20, said she enjoyed Whitesides’ show as a whole including the opening acts.

“I loved that he had more upbeat music and then he was able to slow it down with some ballads,” she said. “It really showed me how good he is as an artist.”

Whitesides said that having the opportunity to perform at a young age has been humbling and that his favorite parts about performing are being able to connect with fans and doing what he loves.