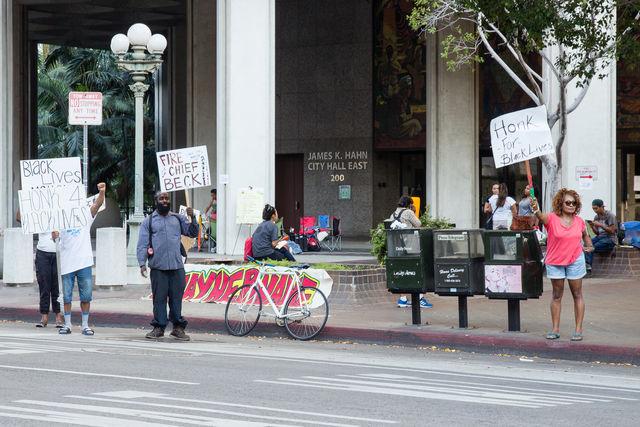 The Los Angeles Police Commission has investigated 1,356 allegations of police bias, including racial profiling from 2012 to 2014, and upheld zero of them, according to the LA Times.

The group wants to hold the Los Angeles Police Department (LAPD) and Beck accountable for their actions, according to Anthony Ratcliff, who is a Black Lives Matter organizer and assistant professor of Pan-African studies at California State University, Los Angeles (CSULA), after teaching Africana Studies at Cal State Northridge from 2009 to 2015.

“Since we have been doing this [2013] there have been no officers who have been held accountable,” Ratcliff said. “The mayor has the power to hire and fire Charlie Beck so that is why we came to city hall and are demanding that the mayor fire Charlie Beck. We are staying here until that occurs.”

Melina Abdullah, a founding member of Black Lives Matter and professor and chair of Pan-African studies at CSULA, said the impromptu encampment began July 12 when the Los Angeles Police Commission voted 3-0 that officers did not violate the department’s use of deadly force policy in the shooting death of Redel Jones.

“We hoped that we would get justice in this case, or at least some semblance of justice,” Abdullah said.

Jones, 30, was killed by police on Aug. 12, 2015, while armed with a knife after being suspected of robbing a pharmacy for $80, according to police reports.

Officer Brett Ramirez told investigators that Jones approached him with a knife before he fired, according to the Los Angeles Times.

“She’s turning, facing straight at me, and then points the knife at me, and charges at me,” Ramirez told investigators according to the LA Times. “I thought my life was in danger. Only one of us was going to make it out of this.”

Protesters question Ramirez’s account and point to witness Courtyana Franklin, who told the Los Angeles Times that Jones ran away when she was shot.

Beck told CBS News he has no intention to step down and plans to serve three more years as chief. Ratcliff recognizes that Beck will not just quit his job, which is why Black Lives Matter is attempting to put political pressure on Garcetti, who is up for re-election in 2017, to make the decision for Beck.

“Mayor Garcetti is the one who can say negative political consequences are coming from this,” Ratcliff said. “The press is bad. Let’s get somebody in here who the majority of the community can look up to and respect.”

As for the protest, participants hold signs along the street and organize spoken word, open mike and closing circles every night. Tents are set up for the 40 to 50 people who have been camping out, according to Ratcliff, who said he has slept at the camp most nights.

Ratcliff said he tries to make it a place for open dialogue where people can express their ideas and discuss topics that are not addressed often enough.

“We even do things called courageous conversations where we talk about hot-button issues in a big group,” Ratcliff said. “Issues like sexuality, gender, homophobia.”

Niki Okuk, who has been helping maintain the camp, hopes more people will join.

“If you are sitting at home sharing articles and you wish that there was something you could do to add to our work then please show up at City Hall,” Okuk said. “It is really hard for us to keep the momentum going without new people participating in the process.”

Abdullah’s greater goal is to concentrate on issues she believes will actually make the city safer, such as livable wage jobs, permanent housing, mental health resources, after school programs, intervention and prevention work.

“The larger vision is that we start to shift resources into the things that really make communities safe,” Abdullah said. “We found that we spend 54% of LA’s budget on LAPD and LAPD is the least effective method of creating a safer community.”

It has been nearly 25 years since the 1992 Los Angeles riots after four white police officers were acquitted in the beating of Rodney King, but still many do not think much has changed in the city.

“One thing that has changed is the fact that people have cameras,” said protester Tara Perkins. “Now there is a light that is being shed on what is going on.”