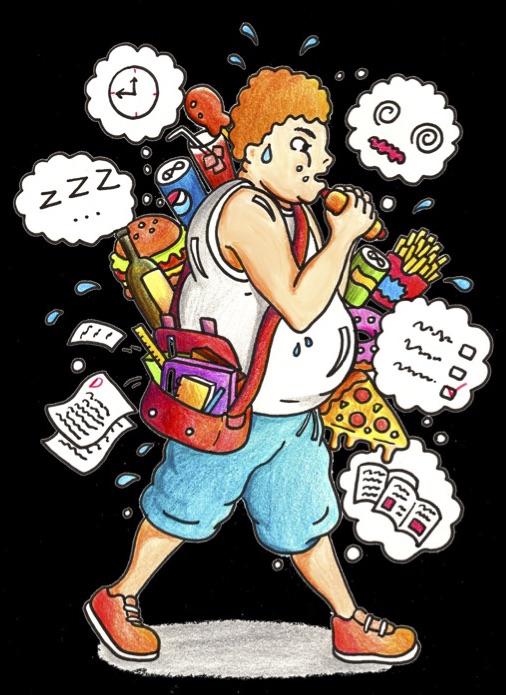 Many incoming freshmen may have heard of the concept of the freshman 15, a supposed average amount of weight a first-time college students gain within their first year.

Despite the freshman 15’s prevalence in pop culture, students are not as widely affected as one may think.

“The freshman 15 is a little bit of a myth,” said Ellen Bauersfeld, registered dietitian at the Klotz Student Health Center on campus. “By no means do all freshman gain 15 pounds.”

According to Bauersfeld, most freshman gain about two to five pounds during their first year, although some students may gain more based on numerous factors. Some of these include a change of environment, food availability and stress.

“A lot of [the difficulty] is being launched into a new environment, and with that comes challenges,” Bauersfeld said.

In a new campus environment, students may feel limited to their food options since a majority of the restaurants on campus and in the surrounding area are fast food establishments. Those who dorm and are on a meal plan may face additional difficulties such as overeating since they have a wider variety of food in a single place.

Students’ reliance on heavily processed, if not fast food, stems from their lack of menu planning and shopping skills, according to Bauersfeld. Since these skills, along with cooking are not heavily stressed in high school and possibly not at home either, students turn to fast food as their only option and think it’s a cheaper meal, though she said fast food is not any more cost efficient than cooking.

Stress also plays a factor into the fast food decision, mainly when students feel crunched between classes. They may feel an urge to eat more than necessary at times, which may be a behavioral response to stress, according to Bauersfeld.

Though all these factors may sound overwhelming, freshmen can look towards older students who have been in this same situation for advice.

“For snacks, instead of going to the market for chips, get fruit instead,” she said.

Similar advice was given by Juan Gomez, a 23-year-old mechanical engineering major. Instead of turning to soda or other sugary drinks to quench thirst, Gomez said to stick to water.

Like Reyes, Gomez emphasized the importance of exercise and food choices in a healthy lifestyle.

“Take advantage of the gym [the Student Recreation Center], find a gym partner,” he said. “Cook at home, don’t have fast food as much.”

Both the Klotz Student Health Center and the Student Recreation Center (SRC) are on-campus resources that students are encouraged to use. The Klotz center, which includes dental, vision and prescription-filling services in addition to one-on-one consultations, is located west of the G3 parking structure. Students can find the SRC, a fully-equipped gym, east of the University Student Union.