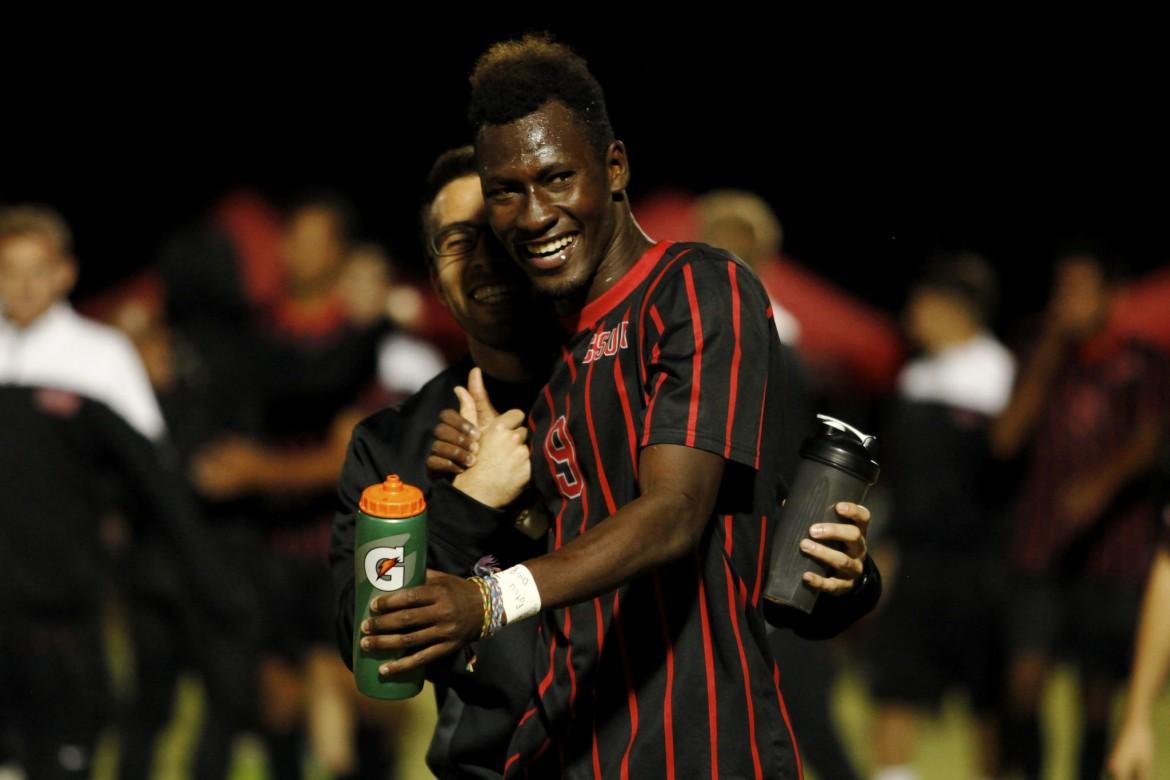 Sophomore forward Papi Diouf celebrates with a member of the CSUN staff after scoring the game-winning goal against UC Riverside. (File photo)

The first half saw the Matadors attempt four shots, but none were on target. Their attempts came from first year forward Bar Shem Tov, sophomore midfielder Nicolas Grinde and freshman midfielder Edwin Quiroz.

The team’s defense played well, keeping the Aztecs with only two chances on goal in three attempts.

In the second half, the Matadors’ offense created eight goal opportunities with six shots almost finding the back of the net. Junior forward Papi Diouf had two chances, a shot wide left and a saved header.

Tov had three chances to score. A header which hit the crossbar and stayed out, a shot over the crossbar and a bicycle kick over the bar. Sophomore midfielder Andrew Rizeq saw his attempt blocked and Quiroz’s last second attempt went wide.

Senior goalkeeper Kevin Marquez was able to make a save on the Aztecs’ only shot in the half. Marquez credited the team’s improving defense in keeping the Aztec’s off the scoreboard.

“We are moving, the ball was moving a lot faster in the back. We are getting our men back, we are not getting caught too high anymore, we are actually moving the ball and it is getting more sharp,” Marquez said. “Overall just a great defensive team. We are starting to build from the ground up.”

In the first half of overtime, the Matadors had a chance to score but Quiroz sent a free kick wide right. The second half saw a few more chances created. Their attempts came from a header from senior defender Gabe Robinson and Grinde’s blocked shot.

Marquez was able to make a save on the Aztecs’ only scoring opportunity.

After the game, CSUN head coach Terry Davila was satisfied with the team’s improvements in their second match of the season.

“I thought we were getting a little more confidence in our midfield,” Davila said. “Our goal keeping was outstanding, and I’m happy with it.”

“We got a young team so we had four days of practice before the first game and now we feel a lot more comfortable with each other,” Hickman said. “We are starting to buy into the concepts we are practicing and the new guys are giving us a lot more, and I think this was a lot better than last week.”