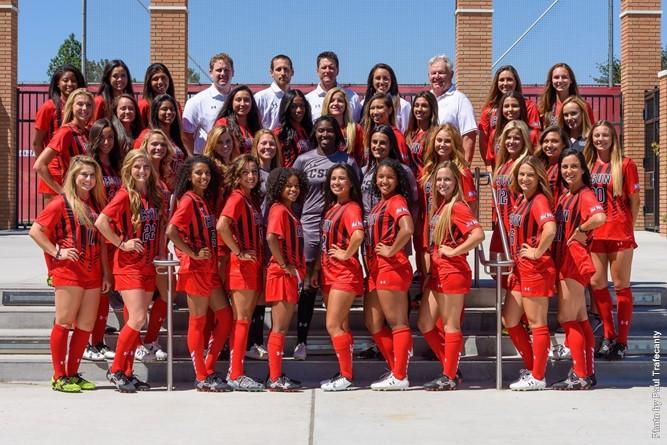 The CSUN women’s soccer is looking forward to the new season.

Last season the Matadors finished with an 11-8-1 record. They went 7-2 at home and 4-5-1 on the road. During Big West Conference play they posted a winning record of 3-1 at home, but struggled away finishing 1-2-1.

Head coach Keith West is excited for the season to get underway.

“Me and the girls are excited to get this season started,” West said.

During their practices before season commences, they take part in scrimmages against each other. The team has already had two games, a 1-0 victory over Portland State and a 1-1 tie against Oregon State.

Redshirt senior Kourtney Kutscher was impressed by what she saw during the win against Portland State.

“It was a great team effort, we were grinding hard during camp,” Kutscher said.

Senior defender Nicole Thompson gives credit to the coaching staff for having the team prepared for games.

“We owe it all to our coaches for giving it one hundred percent every time to get us better,” Thompson said.

The Matadors are without their full compliment of players however. Junior right striker Desiree Raygoza suffered an ACL tear which will keep her on the sidelines until she’s cleared to play. She is scheduled to have surgery on her knee soon and hopes to recover quick to come back.

Another member of the team who is out with an injury is freshman defender Karly Ironside. She is waiting to be cleared to play after a failed heart stress test. Although she is sidelined, she hopes to pick things up from her teammates just by being around them.

“Watching them [my teammates] and learning from them will help my game,” Ironside said.

The Matadors home opener will be Friday, Aug. 26 at 5 p.m. against North Dakota State.