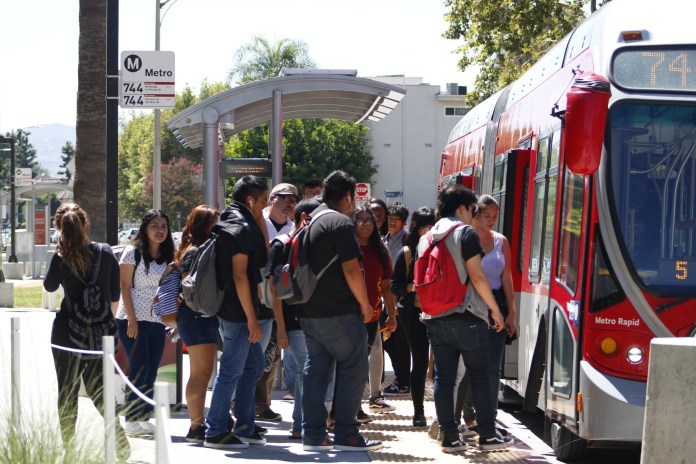 The U-Pass costs $95 for the fall semester and allows students unlimited rides on Metro buses and rail lines from the beginning of fall to the end of winter break.

Students who purchase a U-Pass receive a smart-chip enabled sticker for their student ID that turns it into a TAP card.

The new system is a welcomed change from the old application process, which was tedious and took six to eight weeks.

CSUN alumni, Lorenzo Mutia, said he wishes this process was available when he was enrolled.

“This is an improvement over what we had to do, which was get a paper application, get an original photo of ourselves on photo paper, get proof of enrollment, and then either send it in via mail or go in person to a Metro service center and pay $1, and there are no service centers in the San Fernando Valley,” Mutia said.

Although Metro offers a monthly student pass for $43, Mutia finds the process frustrating.

“I had to do this before October and March because the TAP cards would expire. The process was ridiculous and it pained me to see people shell out way more for passes because they didn’t know or didn’t have time to deal with this mess,” Mutia said.

Ken Premo, an Associated Students manager of support services, said the school used to offer a subsidy, but it didn’t help students as much.

“CSUN had subsidized students $15 a month when they purchased a monthly pass. It was some relief but it doesn’t relieve the process of applying,” Premo said. “We didn’t even sell passes for some of the breaks and just because the semester is over doesn’t mean students don’t need to take public transportation.”

Both Premo and CSUN’s transportation coordinator Astrid Logan said the new program is in response to the Valley Transportation Summit that was held on campus in March.

“We got complaints that the old system was just too much work,” Logan said. “So we wanted to do something that would make it easier for students.”

“Right now, online, you could purchase a U-Pass and then walk over to the ticket office and have it attached immediately, or you can simply walk to the ticket office and tell them you want to get a U-Pass and they can verify your information right then and give you the sticker,” Premo said. “We really wanted to expedite the process of getting these passes into students’ hands. Six weeks is ridiculous.”

Five other colleges in the Los Angeles area will be testing out their own U-Passes this fall.