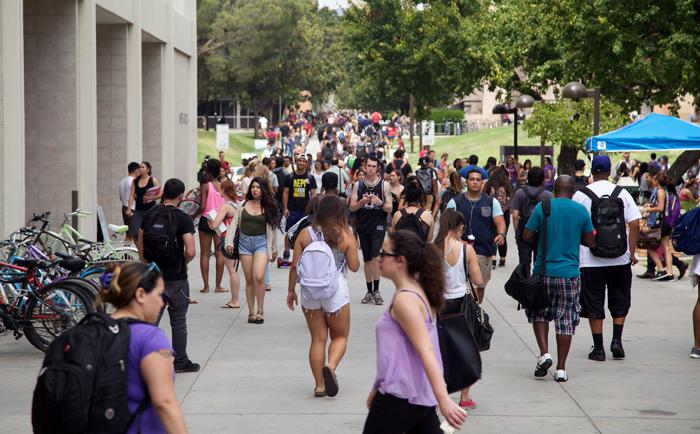 CSUN Students walk along the Sierra Quad on their way from and to their classes. Photo Credit: Juan Parado, The Sundial

CSUN has declared a campus-wide impaction for first-time transfer students which will begin at the start of the fall 2016 semester. Although freshman impaction has been active since 2009, the new addition of transfer impaction is a response to increasing enrollment.

Patricia Lord, Director of Admissions, said the enrollment at CSUN has grown significantly during the past five years, which is why this action must be taken.

“To better align student enrollment with the resources allocated to our campus,” Lord said. “CSUN committed itself to reducing the number of students unfunded by state appropriation each year beginning fall 2016 through fall 2019.”

Several undergraduate majors at CSUN are also impacted; cinema and television arts, accounting, business administration, finance, kinesiology, music and psychology. Each respective major has a different process of implementing impaction to limit the amount of students.

“In some ways, the music department impaction is not new,” said Garry D. Lennon, theatre department chair. “There has always been an audition process, but impaction is making that a little more rigorous now.”

“[Impaction] doesn’t really have a negative impact, in my opinion,” said Dr. Rishma Vedd, accountancy and information systems department chair. “We just now have more qualified students being accepted into our program.”

The closer students live to CSUN, however, the higher the chances they have of being accepted.

Applicants who attend high schools and community colleges that are in CSUN’s local admission receive priority acceptance. Non-local applicants must fulfill higher requirements and are admitted once it is decided that local admissions have been satisfied.

“The intended effect is to maximize enrollment for local applicants and reduce overall enrollment from applicants living outside the local area,” Lord said.

A non-local transfer applicant is required to achieve a 3.9 GPA, according to CSUN’s impaction website. Non-local freshman applicants have to reach a minimum eligibility index of 890 using the ACT and 3700 using the SAT.

“I knew CSUN was impacted, but it was my first choice,” said Kevin Brand, a philosophy major and transfer student from Murrieta, Calif. Brand had a 3.96 GPA and also applied to Cal State LA, Chico State, and Cal State Channel Islands.

CSUN will continue to implement impaction as necessary in the future, according to Lord. Out-of-state students, veteran students or international students are not affected unless they apply to an impacted major.