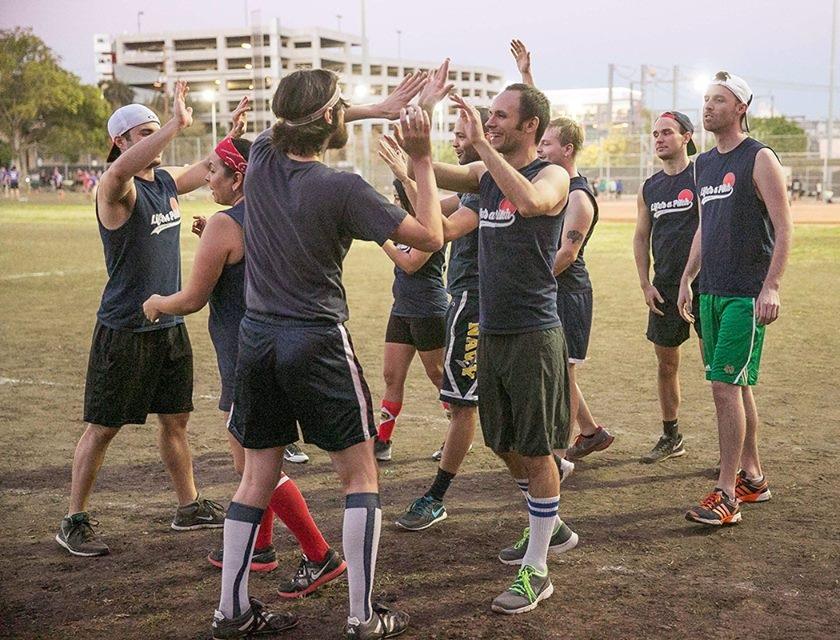 Players congratulate each other after a game. (Photo courtesy of Bryan Cox / Gillian Eve photographer )

Founded in 2007, Varsity Gay League (VGL) has helped create an outlet for social and physical activities for the past nine years.

Owner and VGL founder Will Hackner said he started the league because he and his friends wanted something to do besides go out to bars.

“I went out one night to Fiesta Cantina with a couple friends and we walked in and we looked just looked around and said ‘No.’ Hackner said. “We weren’t talking to anybody and it just wasn’t fun.”

So they decided to find something else to do.

“[We] went into West Hollywood Park and we ended up playing tag for two hours in the hot, humid summer,” Hackner said. “And it wasn’t just fun for us, because we were suddenly being kids again, but ten random people joined us.”

Not long after that night, Hackner was at the Griffith Park Zoo with his friend Andrew Miller when they discussed playing capture the flag like they used to as summer camp counselors. The two set up a game at Pacific Park next to the Grove and 50 of their friends showed up.

From there, VGL was born.

The league held two capture the flag games in the summer of 2007, another three in 2008, and added paintball to their activities in 2009. Now VGL operates year round and offers a variety of sports, including kickball, volleyball, soccer, and dodge ball.

Nelson Xysauanh said he heard about the league through friends and he wanted to make more social connections.

“I wanted to expand my social circle within the Lesbian, Gay, Bisexual, and Transgender community. They seemed like they were having so much fun and I was just tired of the bar scene,” Xysauanh said. “It was just fun and for a lot of us growing up, being gay and an athlete didn’t really go together. It was social fun and then it became a community [for me].”

Player Bryan Cox has been with the league since 2014 and joined because he wanted something where he could be both active and social.

“I wanted to join because I wanted to meet people with similar interests. I am a pretty active guy and wanted to put myself in a position to stay fit and meet people in a relaxed and exciting environment,” Cox said. “I continue to play because these people have become my family. This has become more than just a sport to me. I hang out with these people outside of game day and we have become such a diverse and open community it’s hard to stay away. “

For Hackner, building a community is one of the most important parts of what VGL offers.

“My goals for the league are just to continually create a community everywhere we go. I think the Lesbian, Gay, Bisexual and Transgender community often misappropriates the word and says ‘we are friends’ or ‘we are a community’ but they never really do any community activities,” Hackner said. “They go out to a bar, or they have a party together, or they’re just friends. But that’s not a community.”

VGL’s community includes not just players, but various local businesses and brands. The league partners with businesses in West Hollywood to offer discounts to players. Even a local bar sponsors the league and hosts get-togethers for the players after weekend game days.

“My favorite part of the league is probably getting together at the Gym Bar afterwards,” Cox said. “Because Gym Bar sponsors the league, it provides us with a universal spot for all the teams to come together and celebrate after our games. It gives an opportunity to network and meet even more people. “

The league also partnered with the Los Angeles Dodgers last year and got to play a kickball game on the field at Dodger Stadium.

“I would probably say the proudest moment was last year when we walked out onto the Dodgers’ field for the first time and we were in front of 15 or 20,000 people being acknowledge for the work that we’ve done, and acknowledging out players,” Hackner said. “Just being in front of a predominately straight audience and being recognized by the single most recognizable baseball brand in the world. That made me feel that we’d accomplished something unique, and that we were accepted, not just as a goofy one-off thing but as something that has real value to the people at large.”

VGL currently has leagues in five California cities and has plans to continue expanding into Orlando, Seattle, and Phoenix in the next year. The league is open to anyone who wants to come out and play.