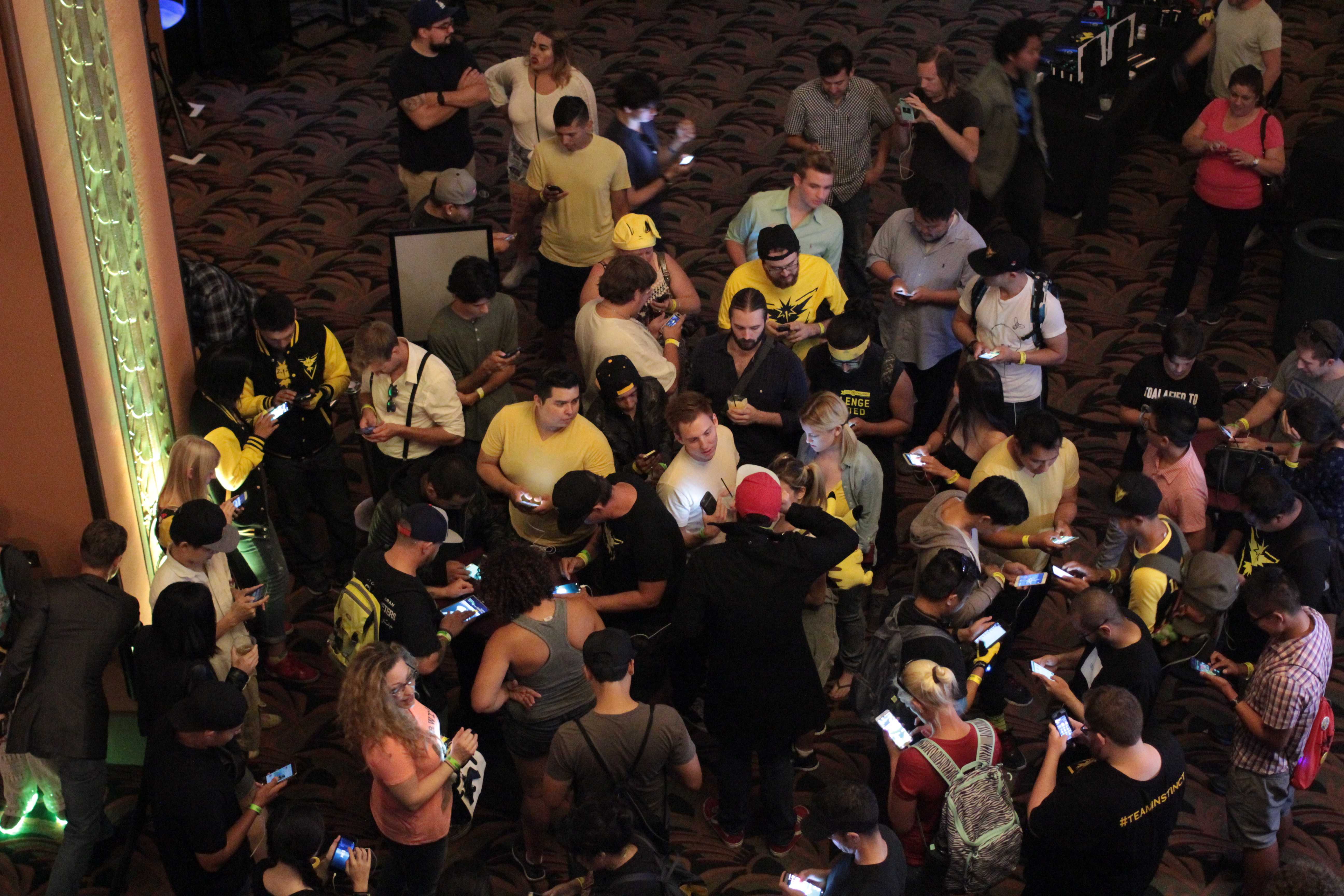 A group of Pokémon Go players from Team Instinct in a gym battle to win their first gym badge at The Wiltern. (Brandon Macken / The Sundial)

Challengers of the three different Pokémon Go teams, Instinct (Yellow), Mystic (Blue) and Valor (Red) competed in a tournament where the winning team would earn the first ever gym badge at the Wiltern Thursday night.

Since it’s release back in July, Pokémon Go became the fastest app ever to reach 50,000,000 downloads and it only took 19 days.

The game hasn’t just become an obsession for the kids who grew up in the 1990s either.

“This game helped a little bit by giving me and my family a hobby. I work two jobs so sometimes it’s really difficult to spend time with my kids,” John Mauro, father of two and member of Team Mystic said.

Pokémon Go trainers everywhere have become so obsessed with the idea of building their teams to be become the very best, that life in the outside world sometimes takes a backseat to what is going on with their phones.

“The only thing I don’t like about it is that everyone is so attracted to their phone,” Kevin Campos, a Team Valor member said

The fact that people are always on their phones may be a negative thing to some, but in hindsight, it can also be positive.

Campos also praised the app for unifying old and new lovers of the game.

To give an idea of what it takes to be a decent player in this game, Team Instinct player Mike Sweetman said he plays a couple of hours a day when he gets home for work or on his lunch break. Sweetman also said he is on level 29.

For the tournament, the first team to either have the gym reach level 10 or whoever holds the gym for the longest amount of time within one hour, will emerge as the winner.

The tournament was a non-stop battle between Team Mystic and Team Instinct to see who would be victorious in earning the first ever gym badge given out at the Wiltern.

The key to winning the battles were to tap the phones during gym battles and have portable phone chargers to keep the phone batteries fully charged.

The celebration all throughout the room was followed by great sportsmanship from Team Valor and Team Mystic as they both applauded Team Instinct’s victory.

After the battle, announcer Jeremy Penn finished the battle as he said this was not a rivalry between yellow, red, or blue, because they are all Pokémon trainers.