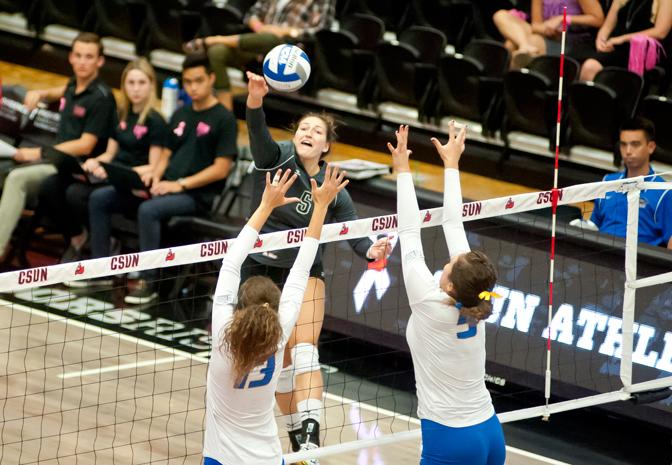 Julie Haake spikes the volleyball over the net away from two opponent blockers. File Photo/The Sundial

The Matadors concluded the University of Nevada, Las Vegas Rebel Classic on Saturday afternoon against the host UNLV Rebels.

Despite sweeping the first two games, the Matadors failed to win their last against the Rebels. Sophomore outside hitter Aeryn Owns had 14 assists. The Matadors had only five blocks compared to 14 by UNLV.

The Matadors hit a season high .288 versus Sacramento State but were out-hit .276 to .145 by the Rebels and suffered their first major loss this season.

Haake had a career high of 27 kills and hit .345, while Hofstra’s kill leader was Veronika Kostova with 22 kills on .425 hitting.

Junior setter Lauren Conati, who had 36 assists, seven digs, three kills and one ace, earned all-tournament team along with Haake.

The Matadors play their third tournament next weekend in Laramie, Wyoming, where they will face Eastern Washington, Wyoming and Samford at the UniWyo Invitational.