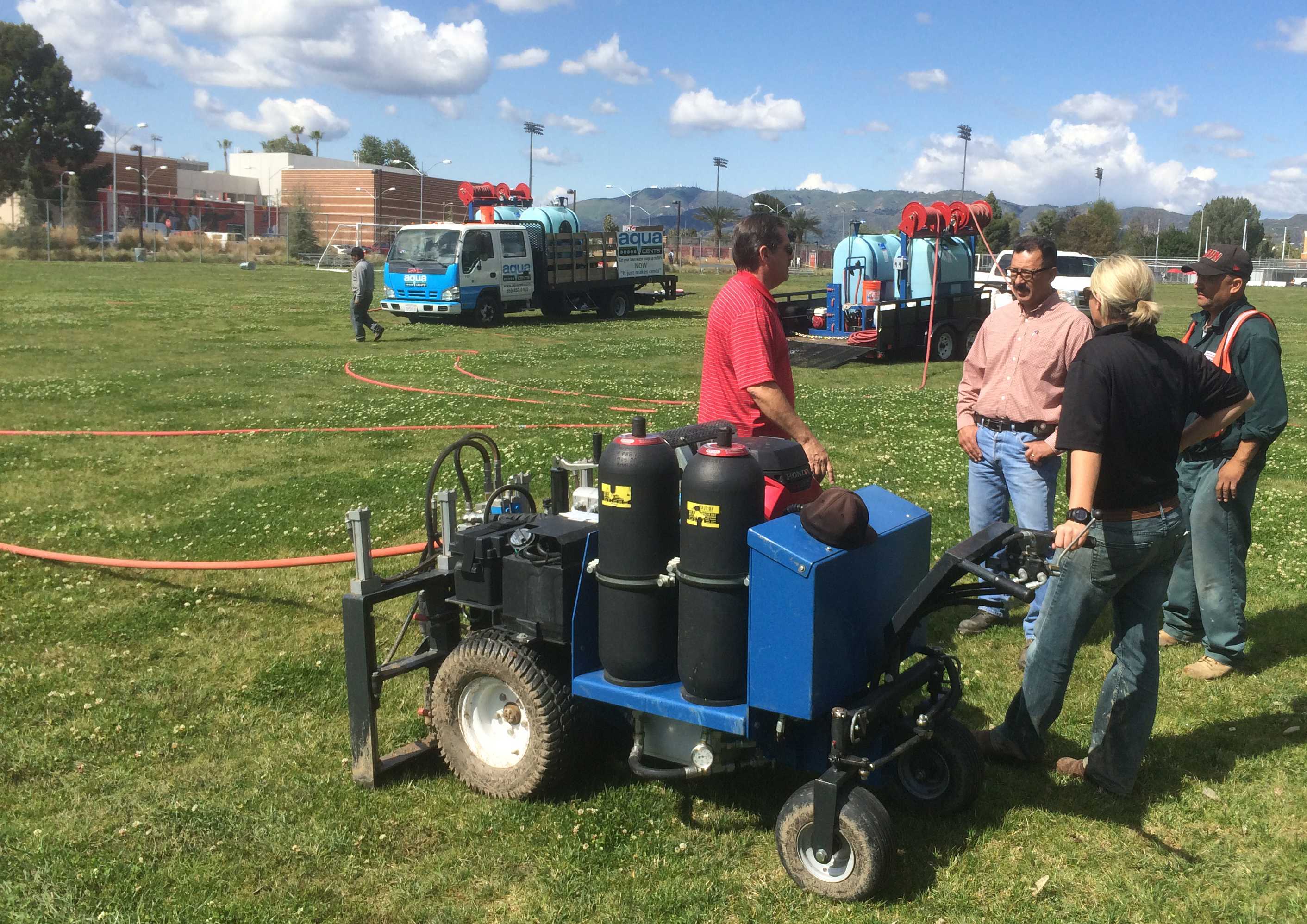 CSUN's sustainability program installs a water saving gel into lawns at CSUN. Sustainability Program Director Austin Eriksson explains: “We have implemented a product called AquaCents the hydra gel, it’s essentially a liquid sponge that we’re injecting underneath the surface of the grass and we’re saving about 50 to 70 percent [of water] so instead of tearing off grass where we need it, like the playing fields or Ovitatt, we’re doing this process and saving a sufficient amount of water,” he said.

Tujunga Spreading Grounds, a water project that aims to save rainwater to aid California’s five-year drought, recently launched in August in the San Fernando Valley area.

CSUN is not associated with the project despite strong efforts to implement a rainwater storage facility.

According to Jason Wang, senior director of the physical plant management (PPM) at CSUN, it is a very complex process. He said there have been struggles to get the necessary licensing from the Los Angeles Department of Water and Power (LADWP) and the county to become a rainwater and storage facility.

Water consumption at CSUN decreased by 22 percent, saving 55 million gallons of water. This surpasses previous campus goals to reduce water consumption by at least 15 percent from 2006 to 2013, according to Austin Eriksson, sustainability program manager at Facilities Planning, Design, and Construction (FPDC).

“We’re evaluating reclaimed water on campus,” Eriksson said. “LADWP does not have a facility to bring us reclaimed water, so we’re thinking about putting one on campus so we’ll be able to regenerate our own recycled water.”

However, since CSUN launched its “Brown is the New Green” initiative in 2015, signs around campus have been informing students of sustainability changes which includes turning off irrigation for over 230,000 square feet of grass on campus.

“We have implemented a product called Aqua Cents the hydra gel, it’s essentially a liquid sponge that we’re injecting underneath the surface of the grass and we’re saving about 50 to 70 percent [of water],” Ericsson said. “so instead of tearing off grass where we need it, like the playing fields or Ovitatt, we’re doing this process and saving a sufficient amount of water.”

As a result, the sustainability programs will be able to maintain the grass that students use for recreation, including the Oviatt library’s front lawn, which is used for graduation ceremonies every year.

Darien Siguenza, chair of sustainability said there are many parties involved in making CSUN a sustainable campus, such as PPM, FPDC, Institute of Sustainability (IS), University Student Union (USU), Associated Students (AS), and students themselves.

“We’re actually the second most sustainable Cal State in the system and a lot of people might not be aware of that so we really want to educate students in a fun and interactive way,” Siguenza said.

Events such as “Earth Day,” and “Water Day” help raise awareness of water conservation, consumerism, and an expansive range of topics based on sustainability. If students want to get involved in sustainability, Siguenza said, they have the resources to do so.

In addition, a new sustainability center is being built and will be rated platinum, according to the Leadership and Energy in Environmental Design (LEED) rating system, Siguenza said. The state requires that newly built facilities be at least silver LEED certified.

CSUN also provides sustainability courses such as SUST 310 and 401, which are primarily hands-on activities associated with conserving energy and water.

All of CSUN’s sustainability plans and expanding projects regarding water can be viewed online through the campus’ sustainability website page that is soon to be updated.