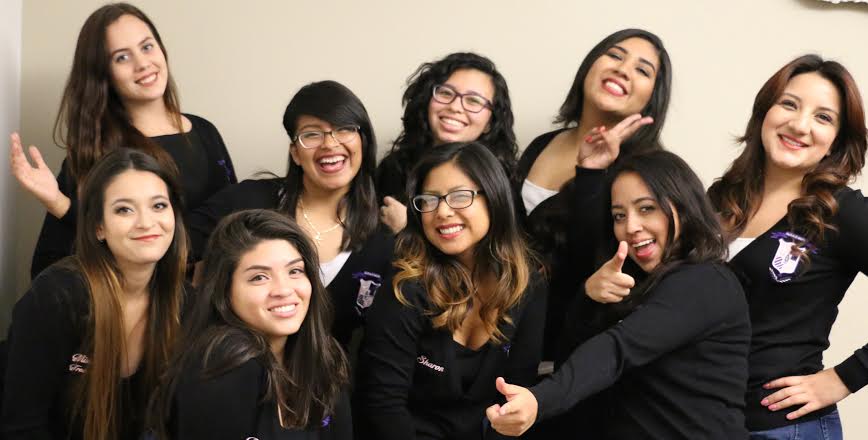 As a Latina-based sorority, Alpha Pi Sigma’s Eta Chapter at CSUN prides itself in helping the Latino community around campus.

“We give out water and make sandwiches for day laborers at the Home Depot nearby or at Lowes as part of our community service,” Aby Catalan, president of the chapter, said.

Alpha Pi Sigma also collaborates with CSUN’s Colleges Against Cancer club and participates in the “Relay for Life” every April. Losing loved ones to cancer is something that hits home to the organization as many members have lost loved ones to cancer as well as the one of their founding members this year, according to Catalan.

The organization was founded by 13 Latinas in 1990, and although they vow to help the Latin American Community, the do not discriminate against anyone as they welcome members of other ethnicities too, Catalan said.

Introverts, extroverts, employed and unemployed girls can be found at Alpha Pi Sigma, but what unites them is one characteristic: their drive.

According to Catalan, besides their pledge to serve the community, their commitment to academic excellence is also a founding principle

“We have ‘Study ‘Socials in which we reach out to other Greeks to study together, drink coffee and it’s usually in a room in Sierra Hall, or at the USU. We also provide tutoring resources within the chapter and mentor one another,” Catalan said.

Estefany Rodriguez said being a member of Alpha Pi Sigma has helped her stay on top of her schoolwork and develop herself professionally.

“I joined Alpha Pi Sigma because I liked the fact that they put academics first, they help you gain leadership skills, are very involved in giving back to the community and of course because of the sisterhood”, Rodriguez said.

Since Alpha Pi Sigma doesn’t have a sorority house, they keep in constant communication through a group chat, said Catalan. Through this, unplanned adventures emerge resulting in spontaneous coffee dates, lunch dates or day trips to Disneyland.

For Rodriguez, having a group of sisters who encourage her and help her is a great perk.

“Being a sister is great because you get to meet new people and bond with one another, as well as look out for each other and help one another, just like a sister would,” Rodriguez Said.

Brenda Hernandez, who has now been a part of the sorority for two years said she joined because she wanted to become a part of something that would make her experience at CSUN great.

“I was really hesitant to join a sorority because of all the negative things you hear from social media, but I decided to give it a try,” Hernandez said.

Despite of all the negative stereotypes that exist about what the Greek life entails, Hernandez said Alpha Pi Sigma is different and changed her life.

“When I came across Alpha Pi Sigma what stood out to me was the way they carried themselves and how professional they were and they were so welcoming,” Hernandez said. “Alpha Pi Sigma has brought me out of my comfort zone and I have improved on my public speaking and learned how to be a leader.”

Since new members are not being accepted this year, those who are interested can apply next semester, said Catalan. She invites anyone who wants to get to know them personally to attend their events this fall and become familiar with who they are.

To join, members are required to have a minimum of a 2.0 GPA and can be of all class levels. Freshmen, however, must have completed at least 12 units at CSUN before applying. Dues vary depending on the semester, but can start at $140 per semester up to $200.

Information sessions in English and Spanish are also offered to the parents or family members of the candidates to ease their mind and educate them on what a sorority is.

“Once you become a member, you have a lifetime membership and sisters for life. We welcome anyone who is interested in bettering themselves as we strive to make leaders out of the girls after they graduate,” Catalan said. “We don’t like people to think that you have to pay to have friends because at the end of the day, you have a sisterhood, a group of girls who liked to be involved in school, excel in academics, network and give back to community.”