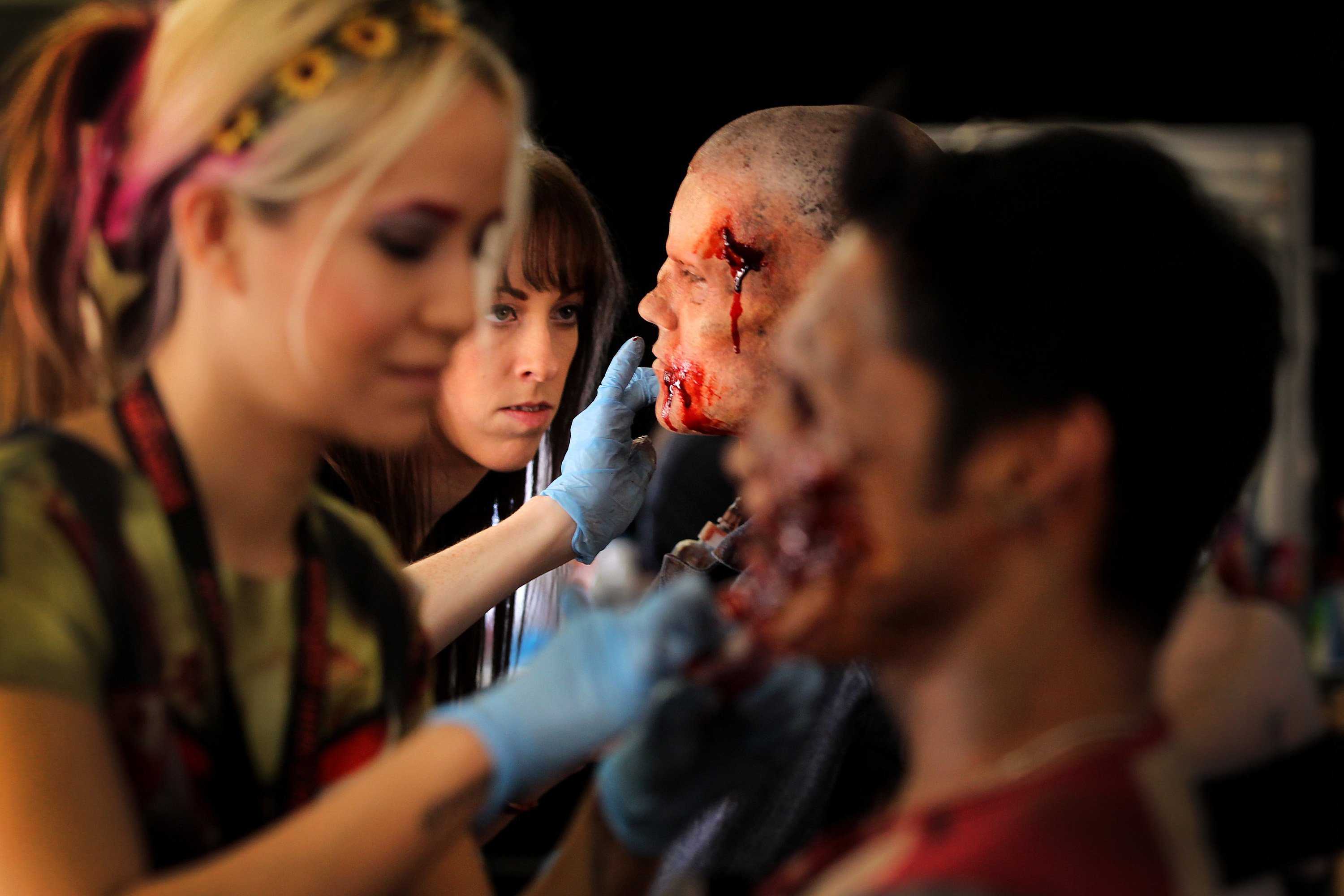 Melissa McComas, center, makes up Marlon Wrede, who plays as one of hundreds of characters involved in putting on Universal Studios' Halloween Horror Nights on October 11, 2013, in Unviersal City, California. Hundreds of people are made up each night with various prosthetics, airbrushing and costumes before they attempt to scare in the theme park's Halloween attraction. (Rick Loomis/Los Angeles Times/MCT)

Richard Linklater’s Last day of school classic is hitting the silver screen in Culver City. Though the school year may have just started a few weeks ago, that doesn’t mean we can’t dream about summer with this star-studded cast.

The museum’s latest exhibit features 14 works from artists like Joseph Cornell, George Herms and Edward Kienholz. The works range from the 1920s to the 1970s and address themes like violence, death and horror. The event runs from every Wednesday from 12-5 p.m. until Jan. 16.

$12, $9 for seniors, students and children get in free

Matt McKenna, a former writer and voice-over artist for the show “American Dad,” performs his one-man sketch show, which he staged monthly at Nerdmelt from 2011-2012. His performance, which comes with multiple costume changes and video segments, will be from 7:30-8:30 p.m. at the Nerdist Showroom at Meltdown Comics on Sunset Boulevard.

– How Do You Depict Religious Experiences?

Located at The Getty Center, this exhibit examines how artists interpret religious encounters in text and images throughout Medieval and Renaissance literature. Zocalo Public and the Getty are co-hosting this event, which is begins at 7 p.m.

Trying to add a bit of life to Los Angeles National History Museum, the Butterfly Pavilion will allow visitors to interact with butterflies from more than 25 North American species. The exhibit runs daily from 9:30 a.m. to 5 p.m. starting on Sept. 16 and running through Oct. 16.

The Halloween season kicks off with the first day of Universal Studios’ Halloween Horror Nights. The fright fest brings horror film and T.V. shows to life through the park’s mazes and scare zones.

Filled with booths from both up-and-coming and established creators, the Long Beach Comic Con is the place for both lovers of comics and all things animated. Fans will be able to pose for photos with Adam Baldwin, Jewel Staite and Sean Maher on both Saturday and Sunday. The event runs from 10 a.m. to 5 p.m. at the Long Beach Convention Center & Entertainment Center.

Cinespia’s Summer Program is coming to an end with Wes Anderson’s “Moonrise Kingdom.” Take in this charming tale of young love among the remains of Hitchcock and Monroe. The screening starts at 8:30 p.m. with doors opening at 6:45 p.m.

The Aero theatre is celebrating Studio Ghibli with its showing of “My Neighbor Totoro.” Set around two sisters and a mystical forest, the character Totoro is one of the most beloved creations of Director Hayao Miyazaki. The screening is at 3 p.m.

Taking a page from Brooklyn Flea, Smorgasburg brings together a huge number of vendors showcasing a litany of delicious dishes. From Raindrop Cakes to Ramen Burgers, to furniture and clothing, Smorgasburg L.A. is showing the Big Apple that it isn’t the only culture mecca. It is held every Sunday from 10 a.m. to 6 p.m.