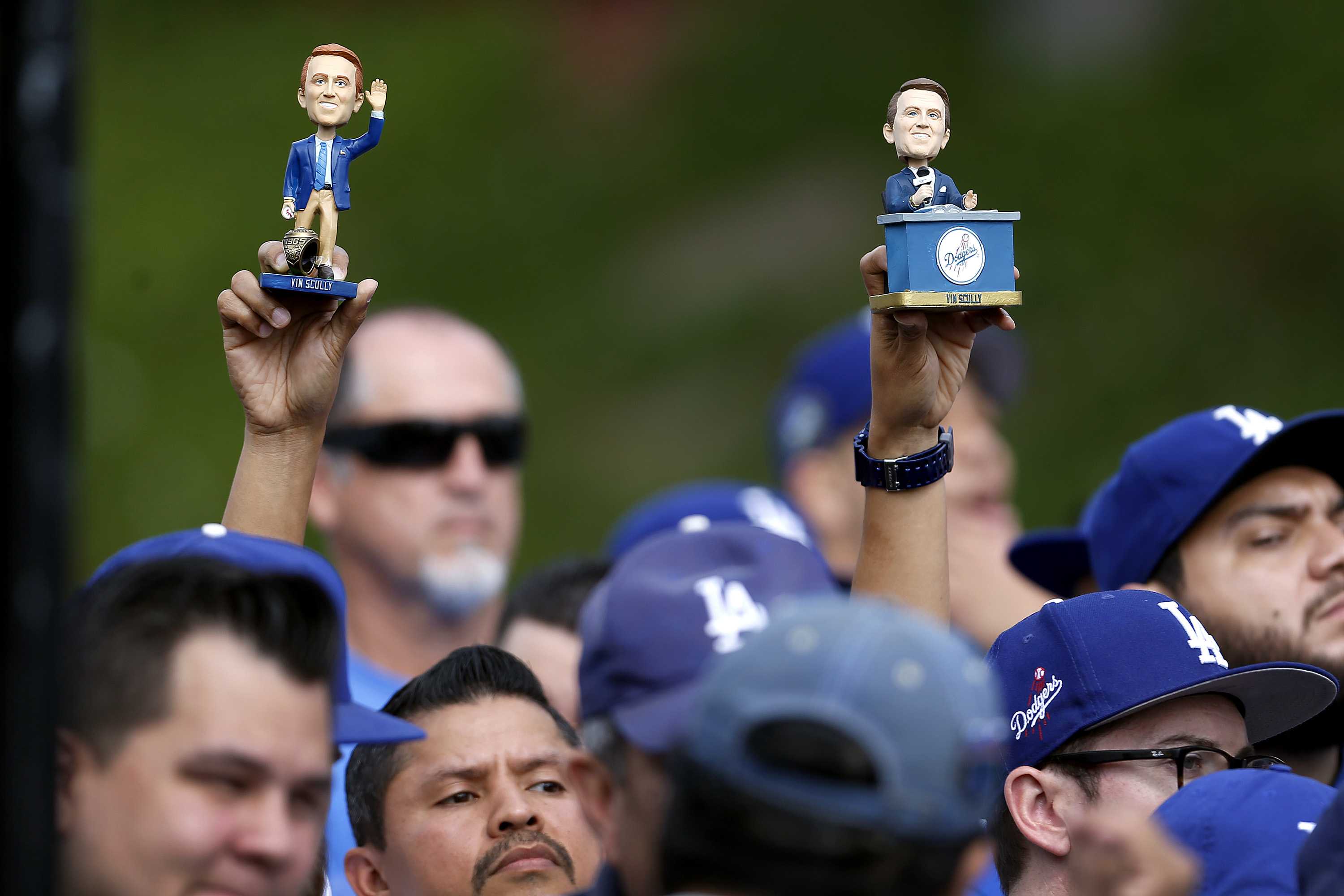 Fans hold up Vin Scully memorabilia during a ceremony renaming a street leading to Dodger Stadium as Vin Scully Avenue on April 11, 2016 in Los Angeles. The longtime Dodgers broadcaster is retiring after this season. ( Rick Loomis/Los Angeles Times/TNS/MCT)

Police are looking for a hit and run driver who struck and killed a woman with a vehicle in South Los Angeles in the early morning. The woman, whose name has not yet been released until relatives are notified, is said to have been in her early 60s. The driver, who is believed to be male, was driving a black Chevrolet according to LAPD officer Jenny Houser. The incident occurred on the corner of 79th St. and Western Avenue. The area is said to be problematic as it is one of L.A. County’s busiest intersections. From 2002-2013, at least 30 hit-and-runs were reported according to an L.A. Times analysis.

21-year old UNC at Chapel Hill football player, Allen Artis, turned himself into police Wednesday following accusations of rape from a fellow UNC student. Artis was released later that day on a $5,000 bond. His accuser, 19-year-old Delaney Robinson, chose to identify herself after feeling frustrated the investigation of her case by the Orange County District Attorney’s appeared to stall. The incident allegedly occurred on Valentine’s Day of this year at a gathering on an campus apartment. Robinson says she was not previously acquainted with her attacker. A court date has been scheduled for later this month and the case is still open pending further lab results.

Former president of Brazil, Luiz Inacio Lula da Silva and his wife, Marisa Leticia, have been under investigation for corruption for the past several months after it appeared he failed to declare ownership of a luxury beach side property in Guaruja. Federal prosecutors are now asking that formal charges be brought against the two. Lula is accused of misappropriating funds from his company, Petrobas, which was already implicated in a corruption scandal. These charges put the future of Lula’s power within his political party, the Workers’ Party, in serious jeopardy. A judge must decide whether or not to formally charge Lula within the next few days. The estimated value of the property is said to be about $550,000. Lula claims he never owned the penthouse. Lula served as president from 2003-2010.

Longtime Dodgers’ announcer Vin Scully, 88, announced he will not be calling any post season games, so his last game will officially be on Oct. 2 when the Dodgers face the San Francisco Giants. His final time announcing a home game will be on Sept. 25 when the Dodgers play the Colorado Rockies. This was Scully’s 67th season as the voice of Dodger baseball. Scully told L.A. Times on Tuesday this would be a better way to sign off because he said otherwise he would be saying goodbye 12 times like in the grand opera.

Pop singer Ariana Grande appeared on “The Ellen Degeneres Show” today and after much prodding from the host confirmed that she is in fact in a relationship with rapper and longtime friend, Mac Miller. Grande said she wasn’t prepared after Degeneres asked her outright if she and Miller were dating. The 23-year-old, whose previous relationships have included rapper Big Sean and back up dancer Ricky Alvarez, recently appeared on Miller’s single called “My Favorite Part”.