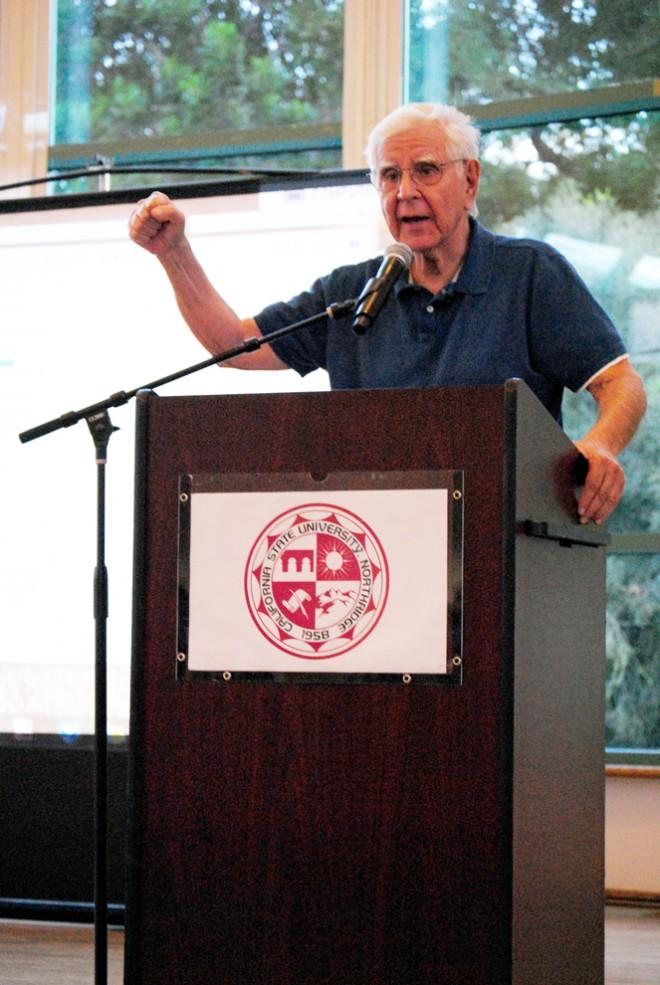 Hispanic Heritage Month observed nationally since 1968, remains a rejected celebration among the Chicano community at CSUN as a result of historical sentiment of the Spanish colonization.

President of the United States at the time, Lyndon Johnson, initiated the observance as a week-long celebration in the late 1960s. President Ronald Reagan then elongated the celebration to 30 days in the late 1980s. In 2016, every Sept. 15 through Oct. 15 marks what is known as Hispanic Heritage Month, but this observance has different meanings to many people.

“Holidays just takes away the attention from the flaws of societies,” Dr. Rodolfo F. Acuña, the founder of Chicana and Chicano Studies at CSUN said “[Hispanic Heritage Month] doesn’t do anything about the poverty, the lack of education, or the inequities of societies.”

According to the 2015 United States Census Bureau, Hispanics were recorded as the second most impoverished race, after Blacks who lead with a 2.7 percent difference.

El Movimiento Estudiantil Chicano de Aztlán (M.E.CH.A) is a national student organization that started in the late 1960s. It surrounds the Chicano movement, and aims to seek liberation from oppressive ties, such as the term “Hispanic,” because it does not preserve or recognize their cultural heritage. CSUN, as well as other universities, have participated in M.E.CH.A’s effort.

“The misuse of the word didn’t start right now,” Acuña said. “They wanted to mark us. They said Latino at first, but it wasn’t adequate enough. So they used Hispanic to white wash them.”

The term Hispanic was created to categorize people from Spanish speaking countries and origins. However, it neglects the history of the indigenous people who were living in those lands prior to the Spanish colonization.

While the term Chicano/a is used to describe Mexican Americans, it does not exclude anyone who shares the same goals of community betterment. M.E.CH.A de CSUN has, at times, united with other campus organizations such as: Black Student Union, National Association for the Advancement of Colored People, Asian Pacific Student Union, Central American United Student Association, and LGBT communities. They hope to reach out to more groups in the future.

M.E.CH.A. de CSUN has a committee called Kalpulli, which is a nonprofit program designed to mentor freshman and new students. It hosts events that increment bonding and community building as well as emotional and academic support.

Among some of the ways to celebrate one’s own identity, the department of Chicana and Chicano Studies at CSUN has a few events coming up.

Endependence Day will be celebrated on Sept. 30 at the CSUN Chicano House from 6 p.m. to 10 p.m. There will be guest speakers and live drag performances, accompanied by food and art vendors. This event works toward dismantling heteronormativity, queerphobia, and systems of oppression, according to a flyer for the event.

Borrando la Frontera, a presentation given by artist Ana Teresa Fernandéz, will take place on Oct. 26 at 4 p.m; the location has not been confirmed. There will also be a Painting Race Workshop from 2 to 3:15 p.m.

“It is not your ordinary ‘academic bubble,’” said M.E.CH.A. member Raquel Cetz. “It is using art as a method to change the world.”

Noche de Ofrendas is an annual festivity that leads to Dia de los Muertos. These events will be celebrated on Oct. 27 and 28 at the CSUN Chicano House. The time for Noche de Ofrendas has not been confirmed, but Dia de los Muertos will be held from 6 p.m. to midnight. Music, food, speeches, and art are among the many diversions to take place. This is a traditional Mexican holiday that celebrates life and loved ones who have died.

“Everybody has differences and you have to recognize those differences,” Acuña said. “People should be aware of what they are celebrating.”