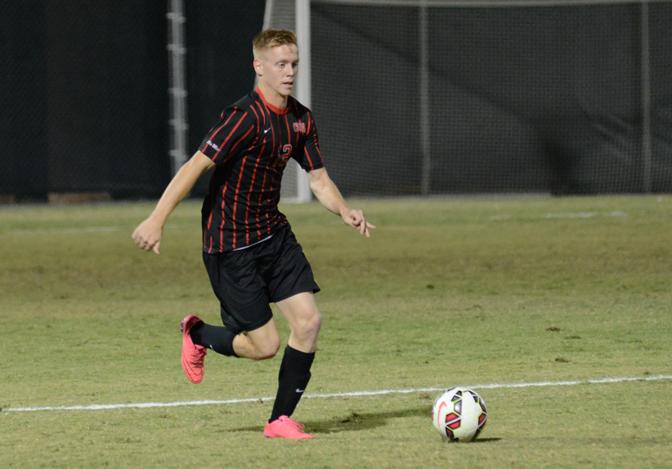 The Matadors look for their third straight win when they face the Anteaters. Photo credit: Alejandro Aranda / File Photo / The Sundial

The first 45 minutes of the game were evenly matched, but the Matadors dictated tempo more than the Wolverines. The Matadors dominated in possessions and ball movement all over the field.

CSUN defense kept the opposing team from having too many scoring opportunities. They allowed five shots, but only one required senior goalkeeper Kevin Marquez to make a save.

On offense the Matadors were able to create three shot opportunities and one corner kick. Freshman forward Bar Shem Tov had an opportunity in the fifth minute of play, which resulted in the team’s only corner kick of the game.

In the 18th minute, Shem Tov tried his luck, but saw his attempt blocked by a defender. The Matadors final shot attempt came in the 24th minute from junior forward Jeremy Degraffenreidt, who sent his attempt high from outside the box.

The Wolverines saw their best chance in the 39th minute when sophomore forward Matt Gay had his shot go straight to Marquez.

At the start of the second half the Wolverines took advantage of playing in front of their home crowd and implementing their own tempo. The Matadors had two early chances from senior midfielder Juan Samayoa which went wide, and junior forward Emmanuel Usen Jr. whose shot hit a defender.

The Wolverines had opportunities in the 60th, 73rd, and 75th minutes that were all blocked by Marquez.

Utah finally broke through In the 77th minute as junior forward Joe Barakat made a run on the right side of the field and sent a cross into the box where senior forward Skylar Milne was able to soar above the Matador defenders and put enough power into his header to get a goal.

The Matadors were unable to score in the rest of the game.

The Matadors next game is Sept. 22 at home against the University of San Diego. Kickoff is at 7 p.m.