Pastry passion leads to sweet lifestyle for the Duke of Donuts 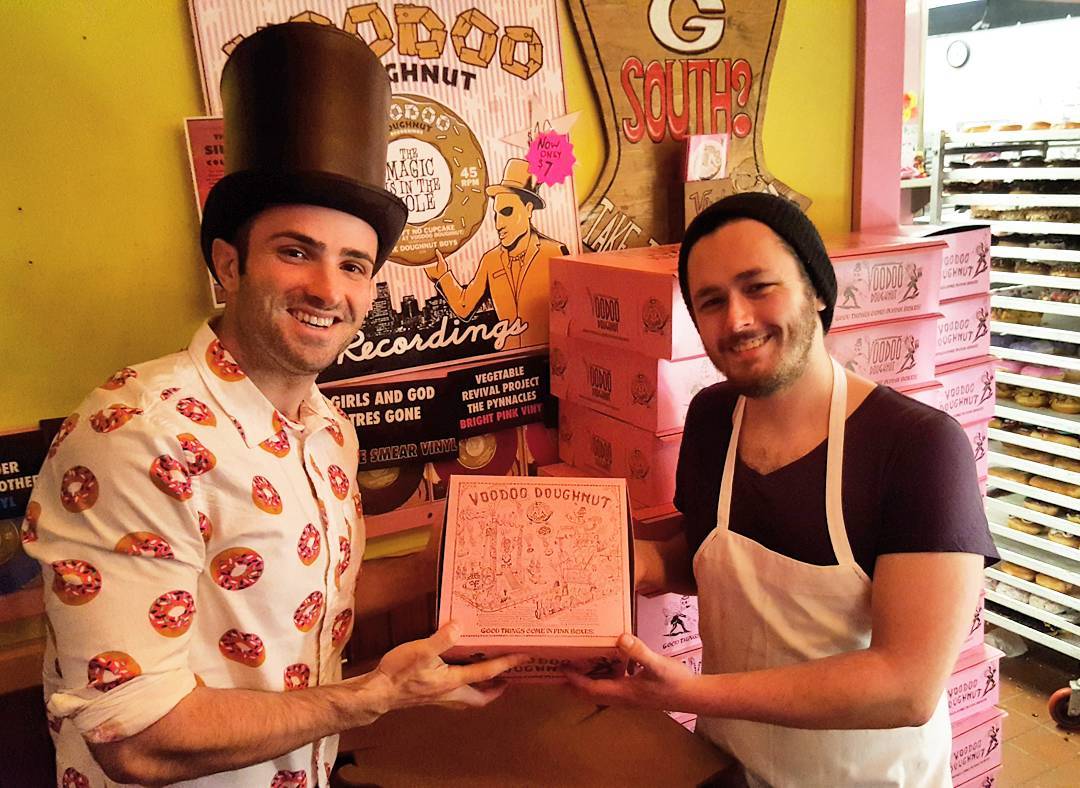 Ilya at Voodoo Doughnuts with one of the shop's employees. Photo Courtesy of Ilya Albert.

He has visited dozens of donuts shops all over the city and on his quest to find the best donut’s LA has to offer.

He has a passion for food blogging and documents his countless adventures all over social media, calling himself the Duke of Donuts.

This donut aficionado is none other than CSUN business marketing major, and USU Student Building Manager Ilya Albert. He recently also participated in the USU Student Summit where he presented a workshop called “Donut Give Up: The Sweet Secrets to A Proactive Lifestyle.”

“My inspiration came from my love of the Food Network, eating, and passion for acting,” Albert said. “I had dreamed of [hosting] my own show on [the] Food Network, however I knew I needed to start from the ground up.”

Throughout his childhood, Albert would often spend time at donut shops with his step father and step siblings.

“Donuts continued to follow me throughout my life, from attending church events with friends, boy scout meetings, and so on,” Albert said.

Albert also said one of the things he loves about donuts is that they bring people together because they gather in order to socialize and share the treats.

When Instagram launched in 2010, Albert saw the social media app as an opportunity to channel his passion for photography, especially food photography.

“I began to notice trendy donut shops opening throughout cities,” Albert said. “With my curious nature, and desire to explore, I began going to each of them and sharing my quests through photos on Instagram.”

A donut revolution began to emerge on scene, and with it came the creation of a new and exciting kinds of donuts. These specialty donut shops put a modern twist on the iconic pastry, and eventually transformed the donut industry.

“Before meeting Ilya, when someone said ‘donuts’, I instantly thought of Krispy Kreme,” Heather Ticzon, a marketing major said. “After meeting Ilya, I was introduced to a world of crazy and awesome donuts!”

In late 2014, Albert began documenting his donut travels after friends motivated him to share his unique findings. He describes his eccentric style of food blogging as a combination of both William Shakespeare and Dr. Seuss.

Albert credits his friend Nick for giving him the nickname, the “Duke of Donuts,” but it all came together after his friend Wes discovered the perfect shirt for him, which as expected, was covered entirely in donuts.

As for the top hat Albert wears, Albert said it serves as the eye catching object for my audience.

“I love to wear it because the hat helps to hone in the theme behind my blog,” Albert said.

Albert’s friends also accompany him on his various trips to local donut shops, and refer to themselves as his “Donut Diplomats.”

He is currently working on is his Donut Documentary Series, which is featured on his Youtube channel.

“Currently, I’m planning to get a total of ten episodes finished and uploaded onto YouTube, and follow up the following year with another ten or so as the second season,” Albert said.

No matter where Albert might find himself, he still takes every opportunity to venture into new or unfamiliar donut shops.

“I remember going to a conference in New Orleans [with Ilya],” Ticzon said. “And I don’t even know how many miles Ilya ran [during] our breaks to stop by a popular local donut shop.”

Albert has many different aspirations for the future and what motivates him the most his drive to succeed.

“I hope to still also pursue one of my life long dreams of owning a small business as well, particularly a donut shop!” Albert said.”So keep your eyes peeled for the next sprinkled sensation on the donut market.”