CSUN not increasing minimum wage along with LA guidelines, but with state 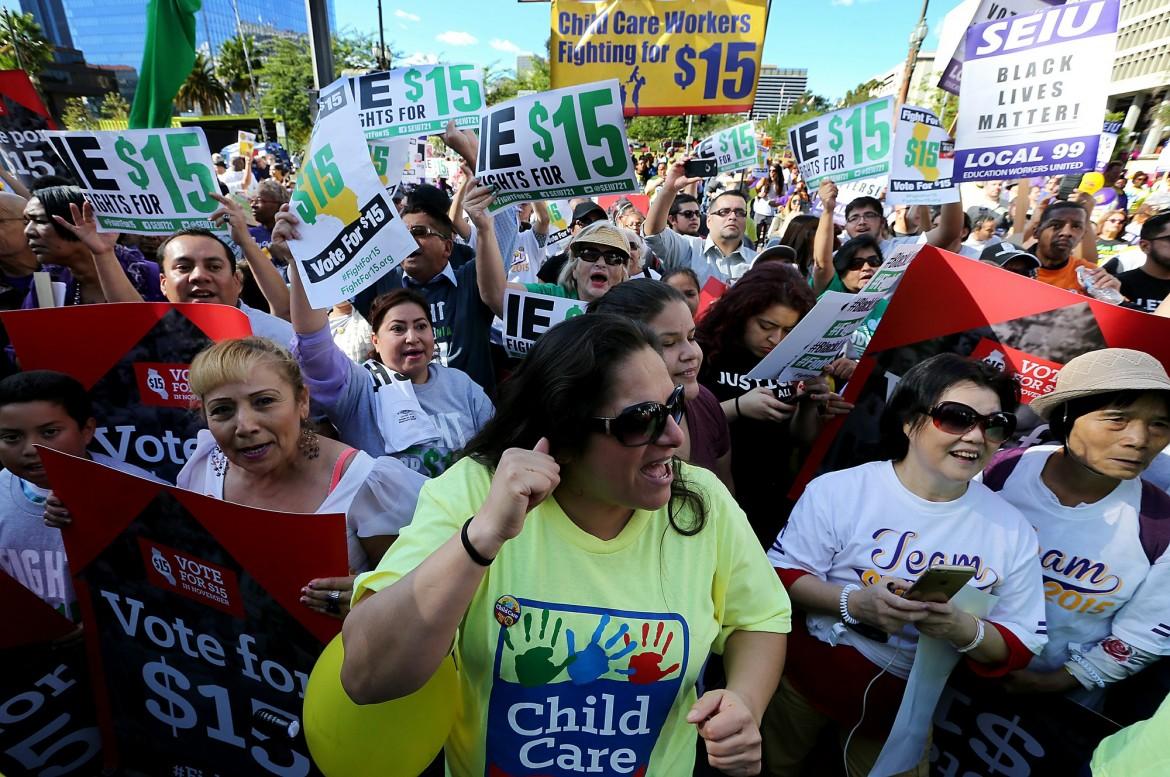 Workers rallying outside Los Angeles City Hall to press for a minimum wage of $15 per hour on Tuesday, Nov. 10, 2015. (Luis Sinco/Los Angeles Times/TNS)

The #Fightfor15 campaign ensued discussions regarding the increase of the minimum wage to what many referred to as a livable wage of $15. On June 10 of last year, the Los Angeles City Council approved an ordinance to raise the minimum wage to $15 by 2020.

According to the Los Angeles Minimum Wage and Office of Wage Standards Ordinances, the L.A. city and county’s timeline of increases for employers with more than 25 employees is as follows:

CSUN, however, did not increase the minimum wage for their workers this past July. According to Alan Kuykendall, manager of payroll administration at CSUN’s office of Human Resources, the university is following the state guidelines for the increases and not the city’s.

“The CSU system, as a whole, is following the State of California’s implementation plan and will be increasing the minimum wage to $10.50 on January 1, 2017”, Kuykendall said.

As stated in the amendment of the Senate’s Bill No. 3, chapter 4, the state of California’s timeline for increases differs as follows:

This was approved by Gov. Jerry Brown on April 4th of this year and filed with the Secretary of State the same day.

During a Board of Directors meeting for the University Student Union (USU) at CSUN, a motion was proposed for them to follow the city’s ordinance, unlike CSUN, a state employer.

In June, the USU was to perform a review of staff and students and make sure all student employees’ wages were in compliance with the new law, according to the meeting’s minutes.

“The review has been completed and all employees who were below $10.50 per hour were raised to the new rate in compliance with the law prior to the July 1 deadline,” said Debra Hammond, executive director of the USU.

However, Kristen Pichler, human resources and professional development officer for the USU said they are not employed by the university, which is why their procedures differ.

“The USU is a separate non-profit auxiliary that operates on the CSUN campus. As such, our workers are employed by the USU and not by CSUN,” Pichler said.

Kayne Saldana, 21-year-old psychology major, has never worked on campus, but he said he has earned a minimum wage salary working as a computer tech in a retail store.

“It was hell. I couldn’t buy anything,” Saldana said. “Living alone, I had to pay my bills and try to stay on track. It was horrible.”

However, Saldana said a higher pay will not make a difference for college students. Instead, he said earning a low wage is a stepping stone and should serve as a motivator for young people to obtain an education.

“I worked overtime a lot and I noticed the extra money didn’t help”, Saldana said. “Getting paid those extra couple of dollars every night doesn’t help because I don’t know a single person who is under the age of 25 who can properly invest their money.”

“People need to be more educated because I find that people think raising the minimum wage will make things easier but they don’t think of the consequences. If you raise something, of course, everything else will go up,” Martinez said.

Although she said she understands there are families who do need that kind of pay, raising the minimum wage is not the correct way to go about it.

“It makes me so angry when I think about the minimum wage rising to $15,” Martinez said. “A lot of people who are demanding this have jobs such as working at McDonalds, for example. Should you really be rewarded that amount if you’re working that kind of job?”

Regarding the differences in the requirements to increase the pay rate, Martinez said she was split in her thinking.

“Some institutions follow the rules that are most beneficial to them and it does seem unfair and maybe slightly unethical,” Martinez said.