YouTube star discusses bisexuality and gender identity at “Beyond the Binary” 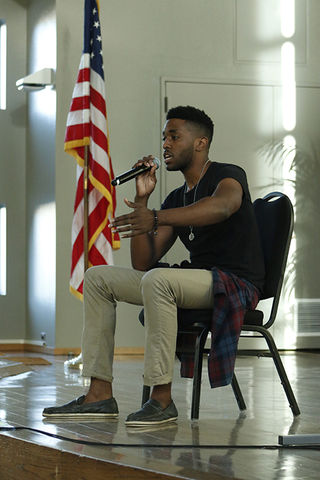 David J. Cork, star of Bi: The Webseries, speaks on his experience growing up as a bi-sexual black man. Cork explains the struggles of being a minority within a minority and hearing every misinformed stereotype about bi-sexual individuals. (Max Zeronian/The Sundial)

Actor and director David J. Cork served as the keynote speaker for the Pride Center’s annual “Beyond the Binary” Thursday night at the Grand Salon.

Arriving from New York, Cork began explaining his method of making his YouTube show, “Bi: The Web Series” about a bisexual actor and his diverse environment with his bisexual sister, straight friend and roommate who recently lost his virginity.

The lead character, Alex, played by Cork, explains his situation being a bisexual African-American man living in New York City, and the complications that follow.

As he began talking about his life, Cork addressed his thought process on how people define themselves as they mature.

“Who really defines who we are?” he asked. “Nature decides right off the bat.”

He also said that people are unfairly labelled by their peers regarding race, class, and sexuality. Growing up in Indiana, Cork realized he was attracted to men at 13 and found it difficult to talk about it, rather keeping his thoughts in a journal.

He said that when it came to confronting this issue, he would have questions about it; in contrast, his parents viewed it as an issue, resulting in the answer of “boys like girls.” Cork realized that while he felt this way, he still retained an attraction to women.

He said he turned to media for guidance, but was met with cliched depictions of being bisexual.

“I decided I needed to create a vehicle, to not be a target,” Cork said. “Just by creating this show two years ago…it created a community for me that I didn’t know existed.”

As the years followed and the show began, his parents became more tolerant, focusing less on their son’s identity and more about wanting him to find love.

Cork also shared his disdain for people that told him that his bisexuality was a result of him being confused or going through a phase, in addition to the notion that it could be “prayed away.” He referred to these options as the worst that can be said to someone going through this struggle.

Ute Anderson, a master of social work graduate, said she saw the event as a way to explain that there is no clear separation between sexuality and gender, and that for each person it can be perceived as a different experience.

Cork also described the difficulty in finding support from both the LGBT and African American communities, where bisexuality is sometimes misunderstood.

“I was actually happy to see it was a black guy,” said Brittanie Day, a 31-year-old master of social work graduate. “It’s a step in the right direction.”