After school program helps kids stay out of trouble 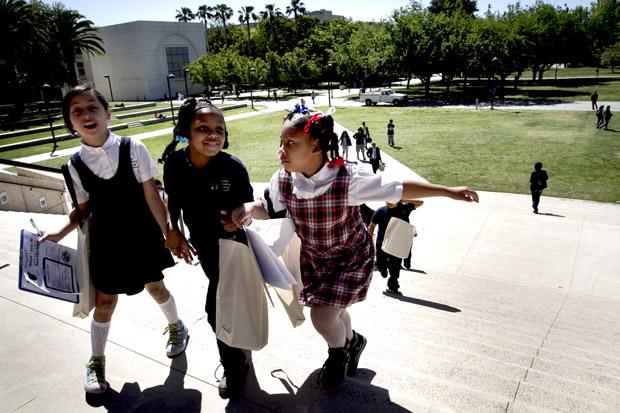 Third graders from the Wisdom Academy for Young Scientists head to the Education building for an introduction on Sociology. CSUN alumni, Kaylie Gomez, took her students to tour the campus on Wednesday. Charlie Kaijo / Senior Photographer

Los Angeles Police Department has started a program to help kids stay out of trouble in their neighborhoods.

The new Jeopardy Program is offered at Van Nuys middle school where students face the reality of gang life and gang violence.

LAPD officer Frank De Jesus said that it’s important for kids to know they need to do their best in school.

“It all comes down to how they behave in school, at home and their schoolwork academically we want to make sure they’re doing well in school,” De Jesus said.

Gio Gandara, a participant of the jeopardy program, was placed in the program by his mother. She saw that Gandara was hanging out with the wrong people. Gandara started in the program when he was 11 and since then has helped form the boxing aspect of the program.

Gandara said, “I guess I was a trouble maker, just getting into fights and being out in the street.”

Gandara is trained by Carlos Palomino, who is the three-time world champion in boxing and is also a volunteer with the jeopardy program.

“It’s an at-risk program, some of these kids already had already gotten in trouble so I try to mentor kids about school and doing the right thing,” Palomino said.

Palomino also said that he sees real potential in Gandara as a boxer. Gandara has already won the Diamond Belt Championships and the Junior World Olympics. Palomino says that he is not trying to create world champions but wants to make sure the kids are staying out of trouble and staying in school.

Gandara wants to become the lightweight champion of the world one day and is grateful for the jeopardy program. Gandara said that he hopes he can inspire young lives.

The Jeopardy Program is being offered at other locations throughout Los Angeles County. The goal of the program is to empower and change the lives of kids who are at risk of violence.