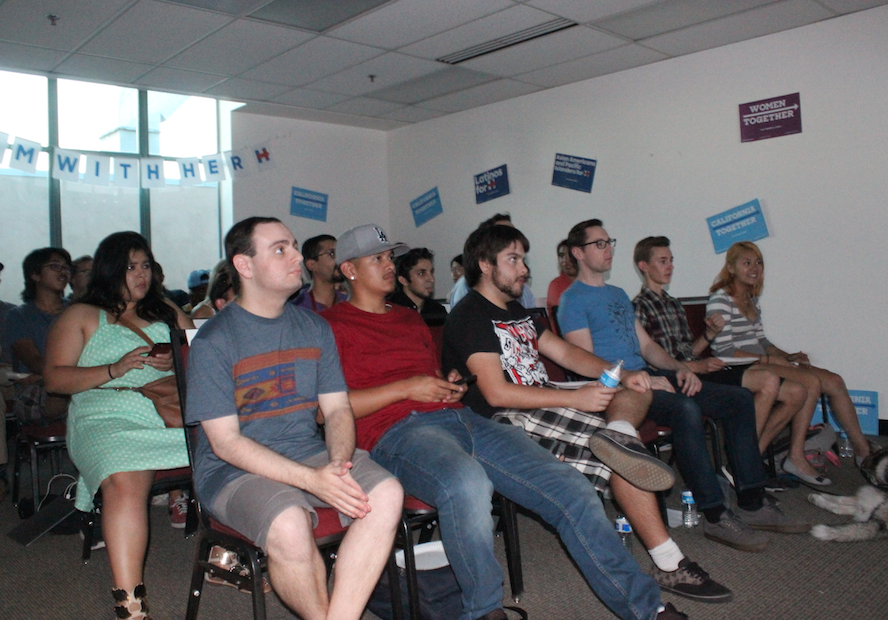 A group of students gather at the University Student Union's Burbank Room to watch the presidential debate Monday night at viewing part hosted by the CSUN Young Democrats. (Robert Spallone/ The Sundial)

The presidential candidates clashed over jobs, security, and personal shortcomings at the first debate of the general election Monday night.

Members of the CSUN Young Democrats held a debate viewing party in the Burbank room of the University Student Union to witness the discussion between Democratic nominee Hillary Clinton and Republican contender Donald Trump.

Clinton and Trump, side by side on the split-screen broadcast of the debate streamed from the Bloomberg TV website and was projected on a screen for all students.

The contentious jabbing from both candidates drew some gasps and cheers in a room full of mostly democrats, although a few republican students attended to hear from their party’s chance for the White House.

“I’m not sure who won yet,” Margarita Romero, 23, a CSUN linguistics major, said, who recently became a republican. “I think that’s something you have to watch over again. Both of them did bring really good points and kind of brought up the skeletons out of the closet from both sides.”

Some members of the Young Democrats viewed the results of the debate differently and felt that Clinton left the stage with a slight edge over Trump.

“It’s a lot tighter than I thought it would be,” Mario Arias, 23, president of the CSUN Young Democrats, said. “I am slightly biased and I will say Hillary won. I actually thought Trump was going act the same way he acted during the republican debates where he pretty much acted a little more childish per se.”

Early in the debate, Clinton said it was good to be with Trump on the stage, which brought chuckles throughout the room as the students along with the rest of country geared up for a debate set in on the most vitriolic election cycles in recent U.S. history.

The nominees soon put each other on the defensive as each candidate mentioned personal issues surrounding their opponents campaign.

Deleted emails, harsh remarks toward women and personal attacks brought about some of the most tense moments throughout the debate.

The presidential hopefuls spent most of the night clarifying positions from how to grow the economy to bettering race relations.

Hillary proposed a tax increase on the wealthy, while Trump suggested increasing taxes on businesses who seek other countries for cheaper labor.

On racial issues, Hillary noted that a healthy relationship between police and different communities, along with better training techniques for officers and gun control.

Trump stated more law and order needs to be used to protect communities with high crime rates, defended the police policy of stop-and-frisk, and agreed with taking guns away from “bad people that shouldn’t have them.”

“[Clinton] was strong in the sense that she kept face,” Arias said, who also noted that the election is more about the presidency and will affect the outcome of the Supreme Court for generations to come.

An anonymous CSUN Trump supporter views the republican candidate as someone who will fix the country’s immigration policy to allow immigrants to enter the country legally and more easily, fix trade deals, and bring jobs.

“He’s toned down the ‘Trumpness’ a little bit and I think that makes him more appealing to the general public,” the CSUN Trump supporter, said, who wore a “Make America Great Again” hat and brought along a cardboard cut out of Trumps’ face to a room decorated with Clinton posters. “Not the far-right or the far-left, but the average American. I think he’ll relate more with them.”

“I’m not going to say I’m 100 percent for either candidate, but I would lean more toward Trump just because he is more for the people,” said Romero.

The night ended with Trump and Clinton both vowing to support whoever wins the presidency.