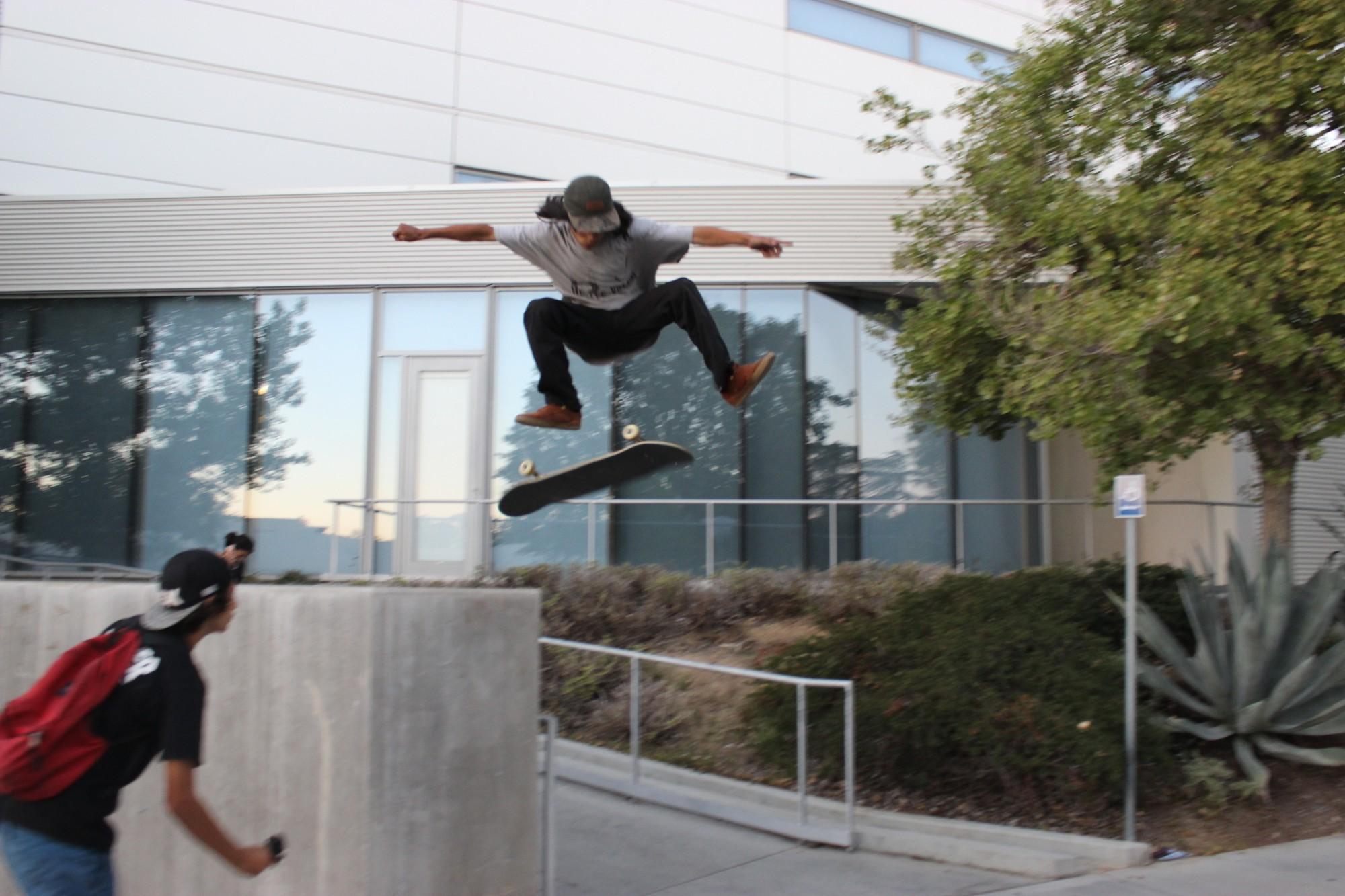 Kevyn G., a 14-year-old skateboarder, attempts to kickflip off of a wall near CSUN’s Chaparral Hall on Sept.13.

It took nearly 30 attempts for Kevyn G. to finally land a kickflip off a roughly five-foot handicap ramp wall near CSUN’s Chaparral Hall.

With each effort, the 14-year-old skater came crashing down onto the concrete in front of CSUN students and staff walking by.

“I already spent all this time on it, so why not try and get it,” Kevyn G. said.

It’s a familiar sight around campus. Some people on skateboards can be seen trying to stick landings in front or behind different buildings and campus police officers are noticing too.

New signs that state “No Trick Skating” have been placed around campus after CSUN’s policies and procedures regarding skateboards and similar equipment were updated and made effective Aug. 1.

“Usually how we handle this, we’ll approach the violator and we’ll advise them of the rules and regulations,” Capt. Alfredo Fernandez of the CSUN’s Department of Police Services said. “We tend to give them one warning and then after that the violator is subject to a fine.”

Policy 800-04 now states that “any type of skating is strictly prohibited when a skater is moving and jumping and a skate or the wheels of the skateboard touch anything other than the ground,” along with a list of structures that skateboards should not be used on.

Hoverboards and similar motorized devices that use lithium ion battery packs are now also prohibited on campus grounds and inside buildings, according to the policy.

Even with passerbys occasionally heeding signs of carefulness and the potential Kevyn G. could risk breaking a bone, he defied the risks and kept on kickflipping off a wall not much smaller than himself.

His scraped-up palms lifted him off the floor with each failed effort that was further damaging his hip and potentially damaging the floor below him.

Campus police are enforcing the policy to make sure skaters do not harm themselves, others and campus property, according to Fernandez.

“The bottom line is this is about keeping the campus safe and keeping down vandalism,” Fernandez said. “It’s not meant to cause any issues among people safely riding their skateboards.”

Finally, as the approaching night began to cool, Kevyn G. sticks his landing followed by a round of congratulations.

Kevyn G. and his friends admit that they’re often asked by campus police to leave the premises.

“[Skateboarding’s] fun,” Darian A.,15, said, who was capturing the skate session on a small GoPro video camera. “There’s some things in life you just have to take your mind off of.”

Once skateboarders who are caught trick skating are identified, they are kept on a database, Fernandez said.

Recovering behind one of the campuses’ buildings, Kevyn G. and the group keep out of sight from any passersby as they spent the night deciding where to skate next.