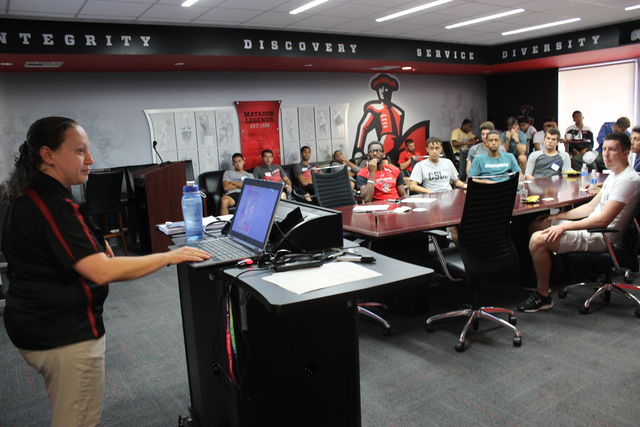 The upcoming CSUN men’s soccer game against Cal State Fullerton on Oct.12 is set to be more than a highly anticipated match, as the Pride Center joined forces with the Matadors to host the first ever Pride Night.

In an effort to promote equality and acceptance among members of CSUN’s LGBTQ and athletic community, the men’s soccer team agreed to recognize people who identify as LGBTQ.

“Fans are fans,” said freshman forward Jackson Mayer. “Anyone that comes to support is welcome to support.”

The team will be wearing special warm-up shirts to honor the event and pregame tabling will feature different LGBTQ organizations around campus, said Sarina Loeb, coordinator of the Pride Center and LGBTQ initiatives at CSUN.

“[Pride Night] is about breaking down some of the stereotypes that athletics isn’t inclusive or that LGBTQ individuals aren’t athletic or don’t like sports, things like that, and creating a strong partnership,” Loeb said.

CSUN’s Pride Center and the Athletics Department have been planning the first-ever pride night since the end of the 2016 Spring semester, said Loeb.

“LGBTQ individuals have always existed in sports,” Loeb said. “I think it sometimes hasn’t always been talked about or people haven’t always been comfortable coming out, because within some athletic organizations it’s not an inclusive environment and players don’t feel safe.”

The Pride Center and the Athletics Department have been working together to change that feeling in sports, according to Loeb.

Loeb conducted “Ally Training” with the men’s soccer team Monday morning, which has been utilized by the Athletics Department to better understand the LGBTQ community.

She spoke with the team about different gender identities and sexual orientations within the LGBTQ community to overcome any misunderstandings or stereotypes.

Players also participated in an exercise that showed them different situations that may occur when someone decides to come out to friends and family.

“As athletes now, we do have a purpose to voice our opinions sometimes too,” said senior forward Richard Martinez. “It’s important that we support all different types of communities. I don’t see why one should be discriminated due to their own personal beliefs or what they love or care for.”

Other sports organizations have organized pride events in the past.

“Nobody can be judged by what they’re born with,” Head Coach Terry Davila said. “You judge people about how they treat other people. Not what they do behind closed doors.”

Coming out has not been a usual occurrence in the world of professional sports. Robbie Rogers has been the only openly gay person in U.S. Major League Soccer after playing for the LA Galaxy in 2013.

“I think it will be a fun game and a way for the LGBTQ community to also support our athletics teams,” Loeb said. “I think for many students it may be ‘I’ve never attended a game, but with this pride night going on it gives me an opportunity to attend and make me feel part of the community and feel safe with the community.’”

Cal State Fullerton does know that the game will be a Pride Night and Loeb is planning on reaching out to the school’s LGBTQ center to see if any members want to attend the game.

Another Pride Night during a CSUN softball game is also being planned for the Spring semester, according to Lizzie Gomez, associate athletic director for internal operations.

“Part of our values at CSUN athletics is diversity and inclusion,” Gomez said. “We’re just really excited. It’s the first pride night. We’re obviously going to continue in the spring semester and hopefully we can continue this tradition in future years and it just continues to get better and grows.”