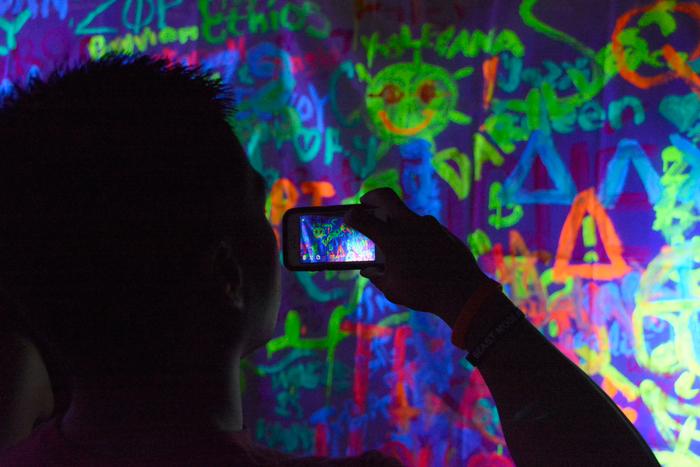 A neon lit wall gave the crowd a chance to be a neon painter at the Big Show in Northridge, Calif. on Sat., Oct. 3, 2015. (Raul Martinez / The Sundial)

This year, Big Show will be on Sunday, October 23 and starts at 1 p.m. on the Oviatt Lawn. The change in time was an attempt to quell excess drinking and and increase safety.

Big Show was started mainly for Associated Students to practice their field of study of marketing, time management and budget planning, all while providing a fun event for students according to Captain Scott VanScoy.

The first Big Show in 2000 was much different than it was last year, said Capt. VanScoy. The event was during the day much like the time and date set for this upcoming Big Show.

Big Show was more of a carnival like event with BMX shows, rides, competitions with prizes, raffles and music being played by upcoming artists. The event was free and open to anyone who wanted to attend, even students from other campuses, according to Capt. VanScoy.

Things changed drastically in 2010 when the event became an evening show and the genre of music was starting to become strictly electronic pop music.

The 10th year anniversary of Big Show changed attendance rates and big name artists like LMFAO, Kevin Rudolf, and DJ Bamaca, were hired for the event according to

The 2010 Big Show was a huge financial success, and thus AS continued to have their event in the evening from then on.

The biggest problem for security and CSUN PD officers are alcohol related incidents, according Capt. Vanscoy. In 2015, there were 44 incidents involving alcohol, and there was only one vandalism incident, where a vending machine was broken into. No other incidents were reported to the CSUN police.

In 2011, there were seven alcohol related incidents during the show. By 2013 that number more than tripled to 25 and by 2015 that number skyrocketed to 44 incidents.

“Last year was [an] unreal event that led to a big conversation” VanScoy said.

After any large event, CSUN police and event coordinators get together and “discuss the good, the bad, and the ugly” VanScoy said.

With the medical services exhausted and local hospital overflowing with alcohol related cases, police, firefighters, and paramedics were overwhelmed with the amount of people needing assistance in such a short time.

With the time and date this year changed, Captain VanScoy said there will be much fewer alcohol relates incidents, and public services will not be as overwhelmed with people needing medical assistance.