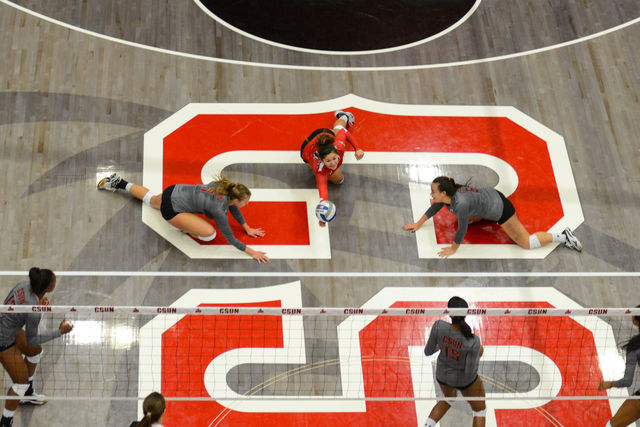 The CSUN women’s volleyball team had their home opener against UC Santa Barbara in the Matadome Sept. 30.

The Matadors came in wins over Utah Valley, UC Irvine and UC Davis. CSUN began the game with hopes of increasing their winning streak to four against UC Santa Barbara.

“They can obviously can get us into trouble today, they block ok and counter attack very well,” Stork said.

Stork said there are adjustments to be made in order to be ready for the game against Cal Poly.

“We have to work on slide hitting blocking, we had control at times and we just let it slip away,” Stork said.

The Matadors took an early lead as they would started the match 2-0.

The UC Santa Barbara Gauchos struck back with force evening the score 2-2 early on the first set.

The Matadors showed tight defense setting up some tight spikes by OH Julie Haake. The team answered to all spikes sent by the Gauchos as CSUN’s setter Lauren Conati came up with a good assist.

CSUN L and DS Erin Indermill came with a great diving save, setting it up for her teammate OH Nickeisha Williams a great spike for the point.

CSUN women’s volleyball lost the first set 18-25 Gauchos. With the start of the second set, the Matadors came back firing up 1-0 early in the match. The Gauchos evened the match at 3-3.

The score was neck-and-neck winding down the end of the second set even at 19-19.

“We learned that we definitely need to come out strong, that if the team pushes we need to push back,” Sato said.

CSUN was down early losing 3-4 Gauchos. However, they did tiethe match at 4-4, before taking the lead 5-4. CSUN showed off serving errors letting the opposition bounce back at the game 6-5 matadors.

CSUN L and DS Kristey Markle said she felt her team played well despite the loss.

“We felt like we played very well, but the other team just went on runs,” Markle said.

She also said she felt the team didn’t connect well as the other team.

“I think we had a great offense today, but defense we had some grooves too,” Markle said.

She added her and the team wanted to have this loss behind them and look forward to the next game against Cal Poly.

The Matadors will play there next game against Cal Poly Mustangs at 7 p.m Oct. 1 back at the Matadome.