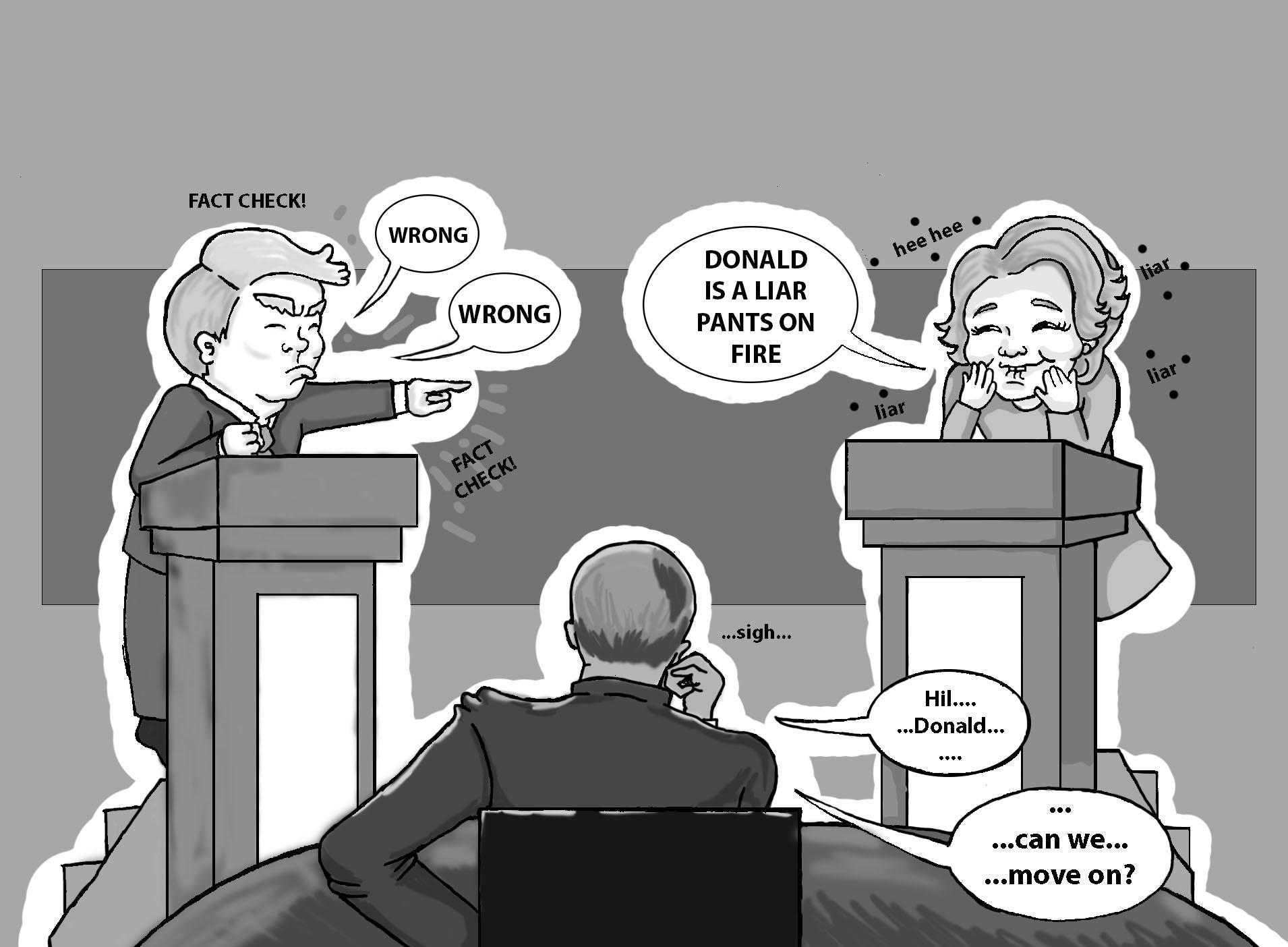 With an election such as this, the first presidential debate between candidates Hillary Clinton and Donald Trump is both a noxious reminder this election is still ongoing and that it’s almost over.

Or it may be the start of something worse. Either way, this debate surely showed it. Trump has found himself to be at the head of numerous “deplorables” (according to Clinton) while Clinton continues to embody the fun, stylish authority all millennials aspire to be.

Their first debate showed the riffraff we have to endure until Nov. 8, where he will be belligerent toward Clinton and the moderator, whereas she will throw spunky one-liners and fact-checked facts for appeal and understanding. Clinton started with the fact that she is a grandmother, already pandering to the homeliness and unquestioned favorability she attracts.

It started on the economy, where trade was the main topic. Trump relied on damning NAFTA (something him and I happen to, for once, agree on), while Clinton said she thought her husband did a pretty good job, as he was a proponent of that agreement.

Trump managed to call out Clinton for calling the Trans-Pacific Partnership the “gold standard,” something which she blatantly denied though was accurate. It is curious how she has been able to craft herself into not caring about the damage done by NAFTA, particularly in Juarez.

This was later followed by problems regarding security, in which Trump made the berserk declaration that Clinton had been fighting the ideologically deranged terror group ISIS for her “whole adult life,” while also blaming her and President Barack Obama for its creation. He also suggested that America “has no leadership, and honestly that starts with Secretary Clinton.”

She made the wise call to say that George W. Bush was the one who had set the plan for troops to leave Iraq at a certain time. She later decided to invoke, as Obama has, that she participated in ordering the raid in Abbottabad compound where Osama bin Laden was found and killed. How climactic it must be to share that win and begin to make it her own in preparation for a four- or eight-year job.

Clinton was confident as she said ISIS would be kicked out of Iraq in a year. A bold claim, though much less concrete to everything else she had said during the debate. This claim was on the same level as all of Trump’s, who emphasized all of America’s problems as being “tremendous.” Next time, make that a drinking game.

It continues to be nauseating to watch as these candidates argue about who is wrong and who is lying. Their comments on the Iraq War even seemed outdated, given my repeated criticism in the past that someone who voted for the Iraq War should not be president.

Even Trump blatantly denied his ribald comments on women, including his clear thoughts on pregnancy and equal pay and finally on having called the former Miss Universe Alicia Machado “Miss Piggy” and “Miss Housekeeping.”

More will be said in the coming months about these two unilluminating candidates. I must, however, turn to the moderator, Lester Holt. Holt kept his guard, even going above debate custom and confronting Trump on the Iraq War. The thought must have crossed his mind to strike at Trump, as Clinton did not, at why Trump would suggest Obama was not born in the United States.

She called it racist, a declaration as damning as how Holt did not ask Trump, in all its simplicity, on why he brought it up in the first place. Easily, Trump blamed birtherism on Clinton, wiping his hands of any his past pathetic and xenophobic jabs at the president.

Americans (and by a greater degree, the world) will get to see what the October surprise might be. The candidates will be viewed with great scrutiny, and analyzed for the two least liked candidates in recent memory.

Could it get worse? I don’t think it can.