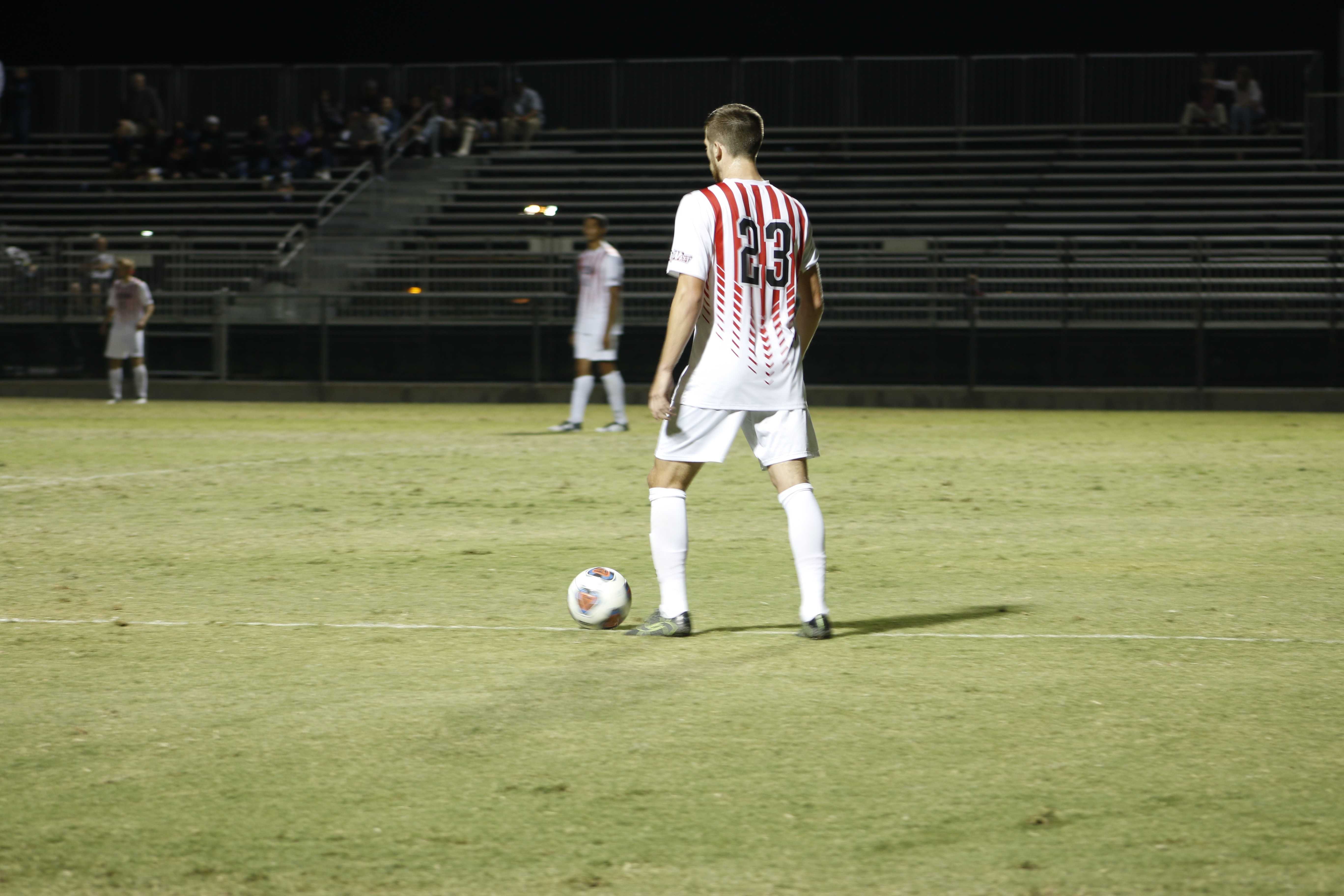 Patrick Hickman holds on to the ball while deciding which teammate to kick it to Photo credit: Kendall Faulkner

The Matadors played their second game at home against a Big West rival. Both teams came in winning their Big West opener on Thursday and are looking to go on top of the Big West.

The game played at Matadors stadium can be divided by their halves. The first half started off dull as the players seemed nervous and fatigued, with a small moment of excitement. The second half was more of an even game by both teams’ strong defenses.

The first half of the game saw little action from either side, the crowd in attendance was silent for most of the first 45 minutes. The Matadors only took six shots and the Hornets took four, while the keepers of each team made only one save.

Not many plays were created by either team. They saw little chances and much of the half saw both coaches making plenty of substitutions, looking for fresh legs. The first half saw players try to make runs and cuts, but fatigue stopped them from creating a scoring chance.

When asked if fatigue was a factor in the play of the game, the players responded knowing it’s part of the game.

“I think it’s hard when you have two games in a weekend, but the boys have been preparing for this game just like any other. No matter when we play I think we are always ready,” Stuart Close, defender, said.

Forward Jeremy Degraffenreidt said fatigue is always a factor in any sport, but luckily they went home with a victory.

The Matadors’ opportunities fell to forward Bar Shem Tov, forward Emmanuel Usen Jr, and midfielder Juan Fernando Samayoa. Keeper Kevin Marquez also made his only save when he caught the ball off a shot attempt.

The first half ended with a 0-0 score.

The second half of the game had more life. The Matadors had six shot attempts and the Hornets took seven shots. Marquez was called upon three times to keep the Matadors in the game until they found a way to break the deadlock.

The Matadors’ offense created some dangerous opportunities off crosses into the box. Forwards Shem Tov, Degraffenreidt, and Nicolas Grinde saw their headers go wide or high. The Matadors saw a few of their shots blocked by the five-man defensive line the Hornets ran.

Marquez made a key save in the 60th minute when he saw a shot from outside come at him with power. He was able to position himself in the right spot and push the ball into the crossbar and out for a corner. That save gave the Matadors a chance to win the game 21 minutes later.

The game winning score came off a throw in by defender Gabe Robinson who sent the ball into the heart of the box. Defender Patrick Hickman was able to go up and redirect the ball towards the right post, where the Hornet’s keeper outreached hand could not keep the ball from entering the back of the net.

When asked about the teams second victory at home, keeper Marquez had nothing but praise.

For defender Patrick Hickman scoring the game winning at goal was his first in front of his fans.

“It’s awesome. That’s the first time I have scored at home in my career. Great feeling. It was awesome to run to the stands and run to Gabe who threw me the ball,” Hickman said.

With the victory, the Matadors are 2-0 in conference play, and visit Cal Poly on Oct. 6.