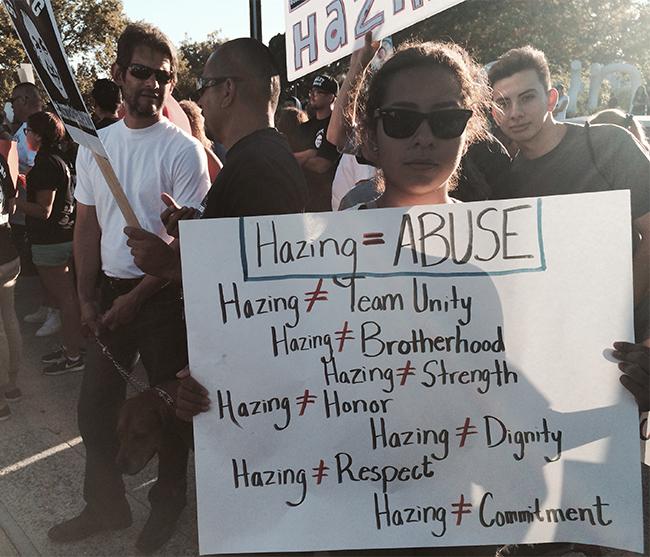 National Hazing Prevention Week was commemorated on campus Sept. 18-23, giving students an opportunity to raise awareness through the use of information booths, hashtags, and art forms.

Vanessa Bustamante, Activities Coordinator for Fraternity and Sorority Life, organized a booth along with other student volunteers and organizations who helped educate and promote the preventions of hazing.

The week-long event was described as a success, according to Bustamante, who explains that any opportunity to inform students about the serious topic of hazing is an achievement. Last year’s event theme was “These Hands Don’t Haze,” while this year’s theme was “Be Someone’s Hero – Stand Up to Hazing.”

Sorority Lambda Theta Alpha won the competition for spreading awareness through an Instagram photo. Each organization was only able to submit one photo. Votes were collected through the likes count on the @CSUN-MIC account.

“No one should go through hazing when trying to join an organization,” said Natalia Aparicio, a member of LTA.

Participation in this anti-hazing event was not mandatory, but CSUN greek life students are frequently mandated to attend workshops, courses, and conferences.

Greek 101, an upcoming conference at CSUN, will host a workshop that talks about the basic recognition and protocol of hazing. Prospective members of greek organizations must attend this mandatory interactive program, alongside other requisites.

Students also walk out of the conference with a handbook that lists many attainable resources.

“We try to make sure that we are informing people (in order) to create a culture (where) we’re reporting these incidents,” said Bustamante. “We are creating a culture on campus that is safe and that everybody feels that they can join anything that they want.”

As an outcome to National Hazing Prevention Week, some CSUN students shared an interest in creating an on-campus club that focuses on year-round activities and events for hazing prevention, to which Bustamante showed her support.

“So often, it is seen as a problem within only Greek lettered organizations,” said Bustamante, “but we want to ensure that people are informed that it can happen anywhere.”

Bustamante listed organizations that are potentially prone to hazing: athletic teams and sports, group clubs, jobs, and even the military.

CSUN has a team in the Students Affairs Office that investigates any form of hazing.

“Depending on the circumstances, hazing can result in the permanent or temporary loss of recognition of any club or organization that is found accountable for hazing,” Lingrosso said.

If hazing becomes too severe, clubs may face prosecution.

“Hopefully we move to a place where we eradicate hazing on a national level within every type of organization, but with that, it takes information and creating culture shifts,” said Bustamante. “That’s really what we’re trying to do.”

Dalia Espinosa contributed to this article.