Men’s basketball warms up for season 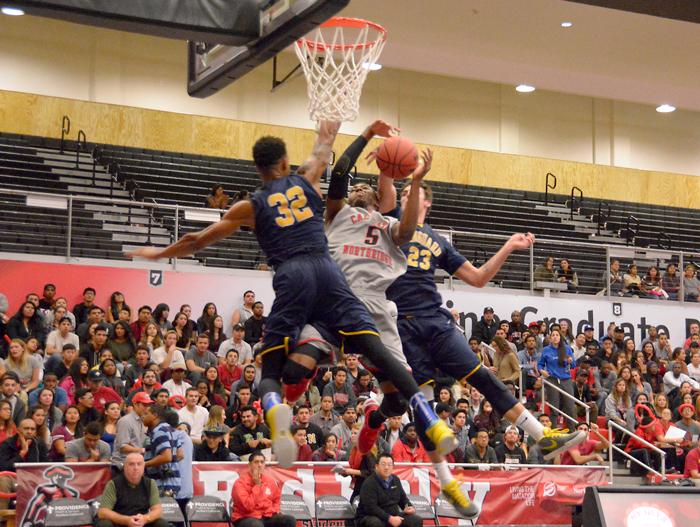 CSUN's forward, Zacarry Douglas, goes up stron aginst two Vanguard defenders in the Matadors home opneing victory to the Lions by a final score of 52-72 at the Matadome on Wednesay, Nov. 18, 2015. (Raul Martinez / The Sundial)

With a new season rapidly approaching, the CSUN men’s basketball team is anticipating a return to glory.

The Matadors have had success in past seasons, advancing to the NCAA Tournament in both 2001 and 2009. Prior to the team’s move to Division 1 in 1990, the Matadors were regulars in the NCAA Division 2 Tournament.

However, it’s been a rough road recently as the team has not had a winning season since 2008-09 when they made their last NCAA appearance.

The past few seasons have been marred with controversy regarding academic violations, and the team had a self imposed postseason ban last season.

With the ban lifted and several transfers now eligible to make their Matador debut, there is confidence and optimism surrounding the team.

“We’ve been going hard all summer, we’ve been building that unity,” said senior guard Aaron Parks. “We have a lot of talent. We need to put the talent together and be able to work together as a team so we can become a championship team.”

Parks is the longest tenured player on the team and is looking to step into a leadership role in the team’s quest for a Big West Conference championship.

He averaged a career best 13.3 points per game last season and at the team’s annual banquet, he was named Most Inspirational Player by Head Coach Reggie Theus.

“Being a veteran it’s really forced upon me to be a leader and I really value being a leader,” said Parks. “It’s just trying to get the guys who didn’t play last season, who were redshirt, trying to get them into the system. It’s about being able to connect with each player individually and try to build that bond.”

Another player looking to make a major impact both on the court and in a leadership role is junior guard Kendall Smith. Smith played his first season for the Matadors last year after transferring from UNLV.

Smith fit in right away with the team, averaging 15.3 points per game and 3.0 assists.

“Our goal is to win the conference tournament and go on to make noise in the NCAA tournament. We understand that’s a huge challenge but we have all the pieces, we have all the right guys, we just know that’s going to take dedication and commitment,” said Smith.

Being a point guard, Smith understands that he will be counted on to guide the team on the hardwood.

“I feel like it’s my job to be a leader, to be a mentor to some of the new guys, some of the freshman,” said Smith. “I’ve definitely been trying to take some guys under my wing and talk to them in spurts, give them little tips here and there on different things.”

Another returning player who will be counted on to make a big impact is junior forward Tavrion Dawson. Dawson sat out his entire freshman year due to the investigation into alleged academic violations.

An All-CIF and All-State selection at Gardena Serra High School, he made an immediate impact as a sophomore and showed flashes of the player who helped Serra win two CIF championships.

“I’m going to be a guy that whatever coach needs I’m going to come in and do it,” said Dawson. “I can score, coach knows I can do that but he wants to see me get after it defensively.”

Dawson spent most of his summer competing in the Real Run summer league in Carson, a league for Division 1 college players to stay fresh during the offseason.

“In the summer, guys tend to get out of shape,” said Dawson. “It was good competition, guys in our conference from Fullerton, Long Beach State. I had a good time out there, it’s gonna get me ready for competition in the season.”

The Matadors will tipoff their season at home on Saturday Oct. 29 at 2 p.m. against Cal State LA.