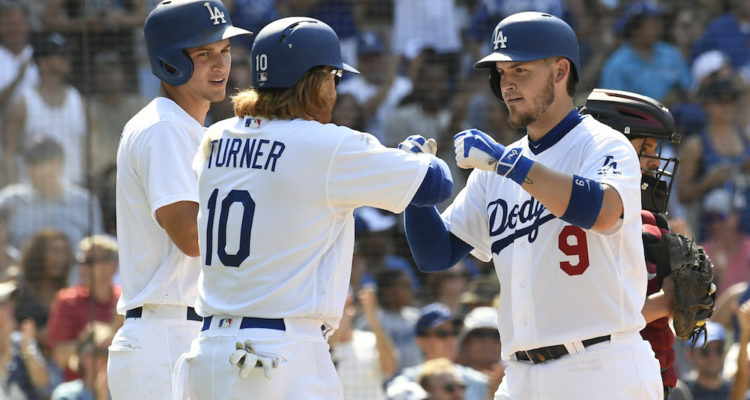 The Dodgers celebrate after a home run. Photo courtesy of USA Today Sports.

After finishing with a 91-71 record, the Dodgers clinched their fourth straight National League West title and a date with the Washington Nationals in the post season.

The Nationals will have a home field advantage. The first two games of this best of five series will be played at Nationals Park and then they head over to Dodgers Stadium.

In the regular season, the Dodgers won the season series 5-1. They won all three games at home and stole two games in nation’s capital. These numbers may make the Dodgers the favorite to win the series. The truth is that the Dodgers come in as the underdogs due to their recent woes in the playoffs.

Their ace Clayton Kershaw is viewed as one of the best pitchers in the league, possibly history, but come playoffs he becomes an average player. Kershaw’s record in the playoffs is 4-6 as a starter, 4-9 overall with a 4.59 ERA.

If they can get that from Kershaw, the Dodgers are in position to win at least two games a series. Against the Nationals, Kershaw will pitch against Max Scherzer in game one making this an interesting start to the series. If Kershaw can win this first duel, it will set the Dodgers in great position not only physically, but mentally, to win the series.

The Dodgers have announced that Rich Hill will pitch game two and Kenta Maeda will be pitching game three. The Nationals have yet to release their starting rotation for the postseason.

The Dodgers have not won the World Series since 1988, which is remembered for the pinch hit two run homer a hobbled Kirk Gibson hit off of Athletics’ pitcher Dennis Eckersley in game one.

When you compare the ’88 team to this current roster, there are three big differences that jump out. The first is the current team has a first time manager in Dave Roberts who will see his first post season as a head coach. The ’88 team was managed by the great Tommy Lasorda who had won the World Series in 1981 with the Dodgers.

The other is the ’88 postseason roster did not have as many rookies. The Dodgers will have seven rookies, led by NL rookie of the year contender Corey Seager. This is an interesting mix of veterans and youth.

The last is championship experience, the ’88 Dodgers had plenty of players who had won a ring before that season. This roster has only two players who have won the World Series, Chase Utley and Carlos Ruiz. They both won it in 2008 with the Phillies.

If the Dodgers want to win their first World Series since ’88, they can take one lesson from that squad; you don’t need to be the favorite to win a title.

The ’88 squad was picked to lose, but instead they made a run that ended with LA’s last title in baseball. This team can do the same and it starts today when Kershaw takes the mound at Nationals Park.

I predict the Dodgers winning the series 3-1.