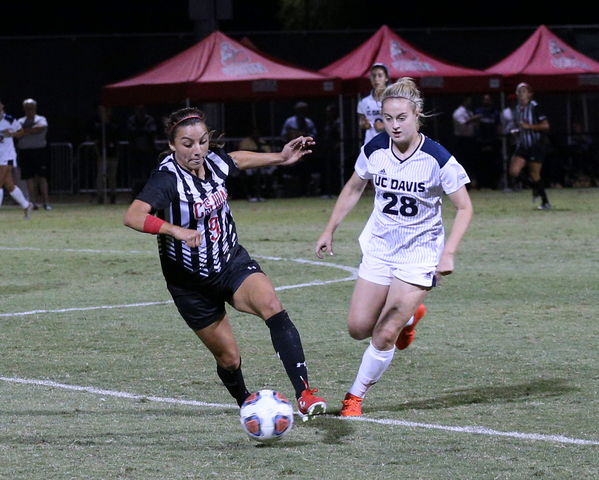 The CSUN women soccer team pulled out a 1-0 victory in extra minutes against the UCSB Gauchos on Thursday.

The Matadors visited the Gauchos who had an impressive 10-1-1 record before the game began. This was a Big West game which the Matadors needed to win, having tied and lost their first two games in conference play.

The Gauchos won their Big West opener and were looking to reach the top of the standings with a win.

Matadors Head Coach Keith West made an impressive decision in his strategy. He employed a high press; forwards would act as defenders when the opposing team had the ball in their defense, for over 90 minutes.

The tactic worked as the Gauchos looked uncomfortable when pressed. This created five shots for the Matadors and forced the Gauchos keeper into making three huge saves.

The high press started to create its first chance in the 15th minute when senior midfielder Kourtney Kutscher had a shot on goal. In the 22nd minute, senior forward Camille Watson saw the Gaucho keeper return in time to making a diving save on her shot.

In the 44th minute, junior midfielder Ariana Tran had a shot off a Gaucho mistake. The high press took the ball away from the Gaucho forwards and midfielders as the game was played on their side of the field.

The Matadors created three shots and forced the keeper into making two saves in the second period. The high press continued to keep the Gaucho forwards silent as the only created five shots and tested CSUN junior goalkeeper Jovani McCaskill only twice.

The coach’s tactic won the game for the Matadors in the second minute of overtime when the Gauchos keeper sent her clearance pass to Matador junior forward Cynthia Sanchez, who took a shot and saw the ball hit the right post and spin slowly over the goal line giving the Matadors the win.